I like this puzzle a lot, although it does make me wonder about the infamous “breakfast test.” More on that later.

We have four theme answers and a central revealer. 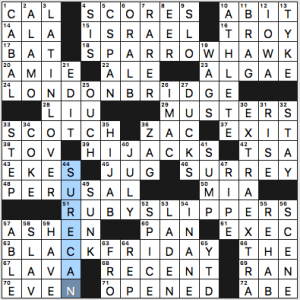 What ties these all together? 39a [Commandeers … or a friendly hello to the people starting 18-, 24-, 51-, and 62-Across?] is HIJACKS. We are hailing JACK SPARROW, JACK LONDON, JACK RUBY and JACK BLACK. JACK RUBY? I thought the breakfast test was supposed to eliminate names or topics that would cause people distress while they were eating. JACK RUBY famously shot Lee Harvey Oswald on live television two days after Oswald killed President Kennedy. That’s not the sort of thing I’d care to be reminded of over breakfast. This is not a knock on the puzzle – the theme is consistent and accessible without being predictable, a nice trick on a Monday. I just wonder about the universality (or actual existence) of the breakfast test.

The fill is good, especially considering the volume of theme material for an early-week puzzle. A few things I noticed:

What I didn’t know before I did this puzzle: that the SURREY is named after the English county. My knowledge of that type of carriage can be summed up in one song.

First off, the byline for this puzzle is, I believe, one of the many pseudonyms of editor Mike Shenk. Lately, Team Fiend has been having some discussions (amongst ourselves) regarding the use of female-sounding pseudonyms by male constructors and how we feel it’s detrimental to the crossword community at large. While today’s pseudonym isn’t female-sounding, Fiendster Laura is blogging “Marie Kelly’s” contest puzzle here, and she makes some excellent points about the issue. If you have any interest in this topic, I suggest you take a look, regardless of whether you solved that puzzle or not.

Back to the business at hand. We have a simple synonym theme in which we find phrases whose first word can mean “nothing.” 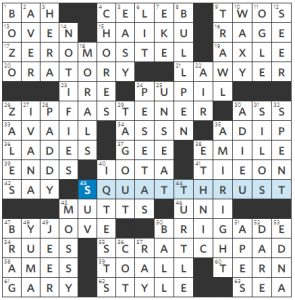 A fine theme set even though the name Zero comes directly from its meaning of nothingness.

Plenty of strong fill to like in this grid, especially “AM I RIGHT?,” BULLPEN, and IQ TEST. Other goodies include ORATORY, PESETAS, and BRIGADE.

A solid puzzle with good fill. But..

There were a couple clues that turned me off. OGLE gets the clue [Look at longingly], which makes it feel like innocent behavior, not sexual objectification. And IVANA gets the clue [Mother of Eric and Donald Jr.]. Why do we need these people in our grid, people who performed questionable acts of re-directing charitable donations and meeting with Russians all so their father could steal an election and undermine our democracy every day of his presidency? Doesn’t pass the Breakfast Test in my book. Life would be so much better without a Trump Presidency…

Get on your feet for today’s LAT puzzle! 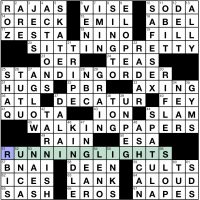 I enjoyed the progression throughout this puzzle’s themers – from SITTING to STANDING to WALKING to RUNNING – all the way down the puzzle’s grid. The fill was largely smooth (which is impressive considering that the grid is a pangram!), aside from UNCA, TOG up (which I’d never heard of), and my ?!?!?!? moment at ROZ/ZESTA. I was pleased to see women like Tina FEY, Paula DEEN (though she’s quite problematic for her past racist statements), ROZ from “Frasier” and JESS from “New Girl” – though they are still quite outnumbered by the men throughout the grid. 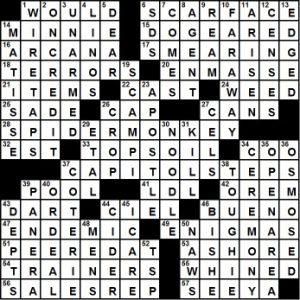 Wowsers! Fourteen and a half minutes (14:33, to be exact) seems like a world record for me. Either it’s too easy, or I just found myself in BEQ’s mind while solving–a scary thought!

I liked the puzzle even though it’s not difficult, thrilling or exciting. It’s well-made, adeptly clued, and just really okay in a positive way. Sometimes that’s what you get and that’s all you need. It has a lot going for it. For the statistically-minded, it’s 68 answers, only six of which are 3-letter words. There are 30 blocks, 13.33% of the grid.

The seed entries appear to be SPIDER MONKEY and CAPITOL STEPS, each of which I got quickly after only a few crossers provided  a toehold. Other nice ILSAs include SCARFACE, DOGEARED, and EN MASSE in one corner; PEERED AT and SALES REP in another; WIRETAPS and ON CREDIT  in a third.

Brendan’s cluing was up to his normal standards, which is a compliment:

And there is more where those came from. Including some stuff that made me look the other way: DEPTS, NAWS, LINOS, LDL, CEIL. It’s the price to be paid for the good stuff.

I hope you enjoyed it as much as I did. 3 stars. 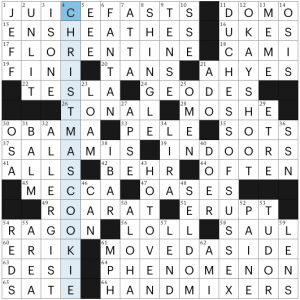 Ooh, the first time I’ve gone under 5 minutes when solving a New Yorker themeless. I think the puzzle crew’s been working on easing up the clues a bit for the sake of enticing solvers who are not tough-themeless-puzzle junkies like me.

Top fill: JUICE FASTS (I would never), PHENOMENON, HAND MIXERS (cute clue: [They might cause a stir?]), CHRISTMAS COOKIE and the HOT OVEN it was baked in, the new DUCHESS OF SUSSEX Meghan Markle, and “OKAY, SHOOT.”

Another good clue: [Inspector of hives, perhaps] for an ALLERGIST and not a beekeeper. Great mislead for a 9-letter space.

I actually had one wrong square to hunt down and fix: I had male OSO instead of female OSA for [Spanish bear], since most of the man-edited crossword venues have trained me to assume the male version is intended unless something in the clue specifically signals femaleness. But that is bullshit, and I’m 110% fine with the ungendered clue leading to female OSA. (Really should have noticed along the way that OLLS is nonsense and needed to be ALL’S, of course!)