Might as well start this post with an Inkubator plug (coming soon!) since both this puzzle and that project feature the women of crosswords! Have you subscribed yet?

THEME: THREE TIMES A LADY. Three first names/nicknames typically associated with women can be found in each of the theme answers. 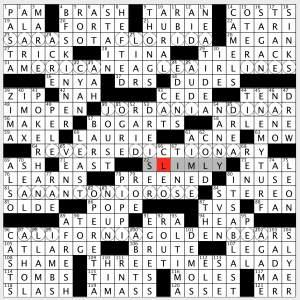 I started this puzzle in the northwest with strong confidence. When the first four circled letters of SARASOTA, FLORIDA revealed themselves, I figured out the theme (thanks mostly to the title). But I lost steam quickly. With the exception of the (perfect) revealer THREE TIMES A LADY, none of the theme answers had a ring of familiarity. Okay, maybe SARASOTA, FLORIDA did, but for some reason I thought I was looking for a foreign city- that’s on me. I was hoping the names embedded within each would help me out, but that didn’t happen. While the concept, title, revealer, and construction were all top-notch, as we’ve come to expect from Evan, many of the names used don’t seem all that common (outside of crosswords, that is):

Of course, that’s a very one-sided and narrow view. And I certainly don’t mean to detract from the obvious effort that went into discovering three different gender-specific names embedded within symmetrical theme answers. However, with both many theme answers and names being unfamiliar, it played on the bland side from this solver’s perspective.

Also, the more common names PAM, MEGAN, TINA, ARLENE, MARIE, and CLEO make an appearance in the fill. ENYA, DREA, and MAE drop by too. My sister’s name LAURIE is in there, but clued as Hugh of House.

I’d call this a 4.5 star concept and construction, but the solve experience puts it just south of 3 stars for me. 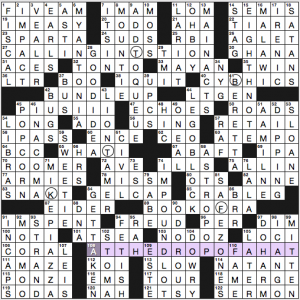 Hats. It’s all about hats. 108a. [Immediately … or where this puzzle’s five circled squares appear?] clues AT THE DROP OF A HAT, and each Across theme answer includes a letter string that’s also a type of hat. That hat word “drops” at the circled square, and is also part of a regular Down answer.

Cute! (Or 28d, “GOOD IDEA!”) I thought it was a hat rebus puzzle at first, but it took a detour I didn’t expect. The “Gear” part of the title doesn’t quite make sense to me, but I’m sure one of you will explain how it’s perfect.

Crispest fill: FIVE A.M. (do not wake me then), the GHANA/MALAWI crossing (though the two countries don’t share a border), BUNDLE UP (I was out for a few hours this afternoon, and it was over 40° so I barely had to bundle up at all … but I was cold), CRAB LEG (maybe weird in the singular?), “I’M SPENT” (though there are at least six other entries with the first-person singular pronoun! And one of them, I CAN GO, is not good), MY ANTONIA, SWEETIE, “OH, BOY,” MAIN ACTS, an ASTRO POP, and the dreaded IMPOUND LOT. 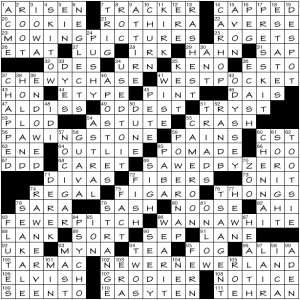 So, Friday I blogged Ed Sessa’s LAT, in which F’s became PH’s and PH’s became F’s. Deja vu! All over again. In “VWs,” we do not deal with Bug automobiles. But with V’s becoming guess what? Given the simplicity of the theme, though, this puzzle was upbeat, fun, and almost exciting. My solving time was (let me see here if I saved it–yup) 29:05. Anything under 30, and we’re talking piece-o’-cake! But a delicious, humorous one today, producing smiles, out-loud laughter, aha moments, and newly acquired knowledge!

The non-theme fill was chock full of good stuff!

At 21a the [Retirement vehicle] is a ROTH IRA. Its symmetrical counterpart, 110a [4 and 6, in craps], is an EASY TEN–not that I’ve any experience with this game of chance. The [Slopes ride] at 4d, is a SKI TOW, which put me in in mind of pesky summer insects.  PRESS KIT, at 17d, is clued aptly (a sportscaster would say “perfectly”) as a [Promo handout].

An educational digression about 34d [“You’ll get __”] (“Keep going”) USED TO IT: I’m not bothered in the least by this “violation” of the “rule” against fragments (commonly called “partials”) with more than five letters. Merl Reagle, as I see it, led the indie charge of disregard for this rather arbitrary regulation. I am often bothered by how some cruciverbalists engage in linguistic gymnastics to clue the 6-, and occasionally 7-letter partials that they want to allow, as they eschew the logically needed FITB clue. Such as [Frequently exhibiting, by nature] for PRONE TO. Here, I suppose, you could clue USED TO IT as [Comfortable with something, as a new policy, after “get”]!

Being [100 percent correct] is being SO RIGHT, 61d. I was worried, though, that something was not 100 percent correct when I encountered 57d [ÒPrizeÓ for the close] NO CIGAR. I was unfamiliar with Ò Ó (and still don’t know how to make it with my keyboard), but I found it to be in common usage in lieu of quotation marks in some contexts (please correct me if I am wrong). I found a church newsletter from 2004 in which an article titled “Hummer Ride Prize” began, “This is more of a ÒprizeÓ idea than an event idea. But this idea can be used as a prize for everything from Òmost visitors brought to youth groupÓ to Ògrad nightÓ to Òmissions fundraising winnerÓ event.”

BEQ hit Lige’s Three-E’s, a term I coined in honor my dad, Elijah “Lige” Fleming, who told me once, “People will tell you they want to be educated. But what they really want is to be entertained. If you can do both, they will also be enlightened.” I found this puzzle to be entertaining and educational. And I came away feeling enlightened. 4 stars.