We have a re-parsing theme today in which words starting with the letter string MISS- have those letters separated from the remaining portion of the words in order to form an unusual nickname. 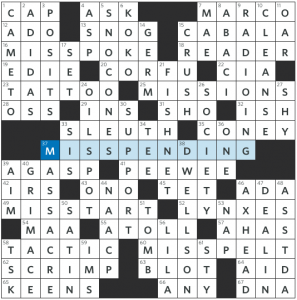 Cute theme that’s not hard to suss out and mostly works, minus the couple little nits I mentioned above. I generally like re-parsing themes, and this one works well. 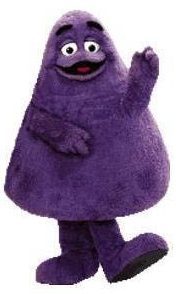 Some of the shorter stuff is stale (OSS, INS, ONO, TET, etc.) but that’s to be expected. I needed all the crossings for LILA [Kedrova of “Zorba the Greek”], but as that is one of my all-time favorite books, I don’t begrudge the puzzle.

Solid puzzle with a cute theme and strong fill. 3.7 stars. 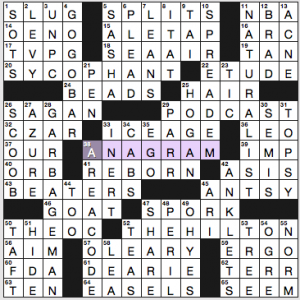 The name of the game is ANAGRAM, like 38a. [Each asterisked clue vis-à-vis its answer].

Cute. I like anagrams. Those tend to be the easier parts of cryptic crosswords for me.

Fave fill here: PODCAST (even though podcasts are of little use to me—”pivot to video” without captioning, podcasts without transcripts … these piss me off), SCOOB as Scooby-Doo’s nickname. I would like “SPREAD ‘EM” if we had equitable policing in this country, but we don’t. 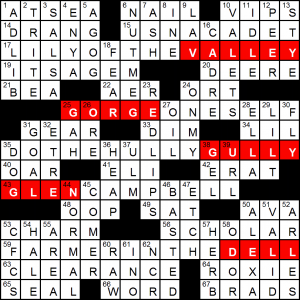 Today we have a synonym puzzle, with five words in longer phrases meaning, broadly, lowland. The answers are often used in that sense in the puzzle, which is not ideal, though there aren’t too many other angles for DELL (the computer?) and VALLEY. The puzzle theme felt like it started off ok, but there weren’t enough valid answers, so it became whatever fitted. DOTHEHULLYGULLY seems to be a song from a minor dance craze circa 1960; I’ve dimly heard of the dance, but the song didn’t even make the billboard charts that I can see. Um. GORGEONESELF is also something that one might do, but especially with ONESELF, sounds rather forced.

[“That’s precious!”, ITSAGEM] – also just seems a made-up thing someone might theoretically say. Also looked skeef at USNACADET and REDLIPS, which left the same, “not really a phrase” flavour in my mouth. 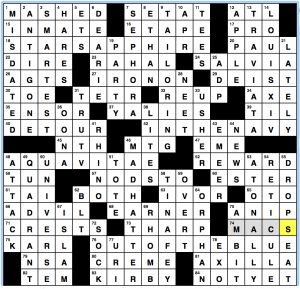 Bear with me on my grid for this one – the revealer promised circled letters, but my .PUZ file had none to be found.  Let’s take a look at what Rebecca Falcon’s cooked up in her guest AVCX:

In the PDF grid, 19D, 44D, and 48D are shaded — these are (SURPRISE) PARTY, (SURPRISE) NEWS, and (SURPRISE) ATTACK, all of which cross various shades of BLUE going accross – SAPPHIRE, NAVY, and AQUA.  Nicely done!