Today’s theme answers have been chlorinated with the addition of the chemical symbol CL. Wackiness ensues.

Oh, by the way, I’m told this is a WSJ debut for our constructor, so congrats to Evan (though I believe he’s had other grids published elsewhere). 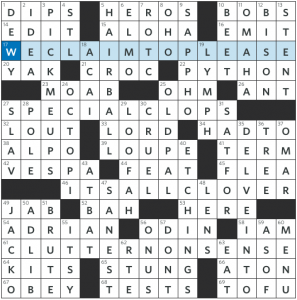 Solid enough though not all that tricky for a late-in-the-week grid. I clocked in at 8 minutes, something, which is about as quick as I’ve ever done on a Thursday, I think.

I’m afraid there’s not a lot else to say. Cluing felt pretty straightforward for a Thursday, though there were a few notable ones: 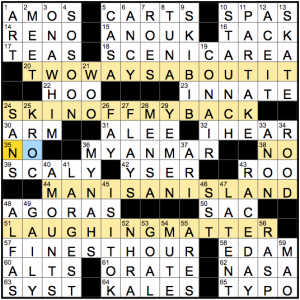 This puzzle was NO trouble at all! Ruth Bloomfield Margolin breaks the rules with today’s revealer at 35a/38a, NO / NO [With 38-Across, what a two-letter answer is in a crossword, usually … or a hint to 20-, 24-, 44- and 51-Across]. Those four theme answers are phrases that normally begin with “no,” but with the “no” removed and clued humorously. What are these phrases with no “no,” you ask?

This one would’ve been even easier for me if I hadn’t put TACt instead of TACK at 16a [Approach to handling something]. It took me about 30 seconds to find that mistake and sort it out.

The theme itself is fine — well executed, Wednesdayish difficulty — but I thought the rule-breaking revealer was a very cool way to tie this one up in a bow. I would have liked the fill to be a little cleaner: ANCY in particular stood out to me, but there were a few other rough patches that might’ve been helped by taking the word count up to 74 or 76. Overall, though, there were some really nice things like SKI BIB and ON A WHIM [Because why not?], “SO SOON?”, MYANMAR crossing YEMEN.

A solid Thursday effort. Until next time! 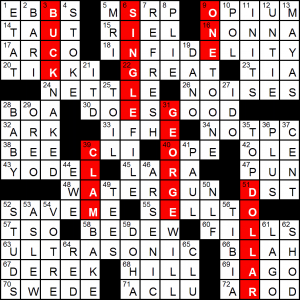 I’m fairly sure I’ve seen “synonyms for a dollar” as a puzzle theme, but this set has a cute revealer – TOPDOLLAR, and goes for quantity with five synonyms. BUCK, CLAM and GEORGE are for me more interesting than ONE and SINGLE because their regular meaning is far removed from the monetary one.

I hope you didn’t get to the bottom too quickly and encounter [Too high for people to catch?], ULTRASONIC which looks thematic as a long across with a “?” in the clue. Talk about a red herring!

Not a fan of the trite [Distressed damsel’s cry], for SAVEME. A more specific clue would be the Queen song, but anything more neutral would have been appreciated.

Surprisingly tricky for me was [Songwriter with John], PAUL, because TAUPIN had too many letters! 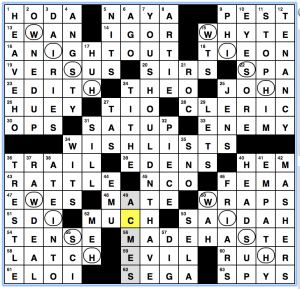 Aw, it’s Christmas, even at BEQ’s puzzle today.  This one isn’t as easy a theme to break down since there’s not really theme answers so much as a series of circled/shaded.

We’ve got four diagonally placed sets of circles in the grid, each filled with the letters W-I-S-H.  These are literal WISH LISTS, since they list diagonally down the grid.

I slightly resent the cluing of this as “Aids for shoppers who are clueless at giving what people want … and a hint to this puzzle’s theme” — I’m a tricky person to buy for, and making a Wish List are an easy way to let my loved ones (who aren’t really clueless) figure out what to get me.

More birds?  YOU SHOULDN’T HAVE.  No, seriously, do not buy me birds

In the grid: loved the cluing of “Was depressed, maybe?” for SAID AH.