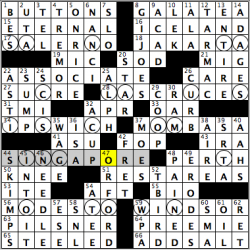 ¡Feliz Navidad, mis amigos guapos! Hello to everyone, and I hope that you are all starting your Christmas Day in the right way! If you started it by doing crosswords and then coming on here to spread some holiday cheer, light-hearted banter and/or provide insightful commentary, then just know you’re awesome! Speaking of awesome, Liz’s grid today was just that, with each of the circled letters contained in clues that all reference different geographical places on the globe. Combining the letters, in order of where they appear on the grid numerically, spells out “SANTA CLAUS IS COMING TO TOWN.”

Also, outside of Antarctica, each of the other six continents is represented in the grid with at least one of the themed clues, which is just amazeballs!

Since this is the time for wishes to come true, I thought seeing GALATEA in the grid was pretty funny…unless one of you also possess a statue depicting a person that you adore so much that you wish that it comes to life (8A: [Pygmalion’s ivory statue]). It’s so hard to focus on fill outside of the themes because of the execution of the theme — and the sheer number of theme entries: 12! – but I liked REST AREAS, and I’ll be hitting a couple of them while making my way to Boston today (51A: [Stops during a road trip]). Actually, I only found out about a couple of years ago that the word PILSNER is derived from the Czech city, Plzen (Pilsen), and I discovered that bit of info when a commentator during a soccer match involving the local soccer team, Viktoria Plzen, mentioned it during the broadcast (63A: [Light golden lager]). Throw in ON RICE to Pilsner and we might have a nice little Christmas dinner on our hands (5D: [One way to serve curry]). There was one entry in the grid that was a geographical location but was not part of the theme, though I loved that the clue included a staple of Christmas lore. It’s also featured in our “sports…smarter” segment…

“Sports will make you smarter” moment of the day: ICELAND (16A: [Country with wild reindeer]) –  Earlier this year, the national men’s soccer team of Iceland became the smallest country by population to ever participate in the FIFA World Cup, one of the reasons why so many neutrals around the world ended up adopting the team as one to root for during the tournament. Another reason for the worldwide admiration of the team was became of the “Viking Clap” demonstration that Icelandic fans broke out during games, something that has caught on like wildfire across the globe, including featuring in many American sports arenas. For those who do not know what I’m talking about, here’s a sampling.

Merry Christmas and Happy Holidays to you all! Some of us are probably having a better time of it than others, so think about those who might/are not as fortunate or find themselves not feeling the holiday spirit for entirely legitimate reasons. Thank you so much for your time, as always! Have a great rest of your Tuesday and, as always, keep solving!!

Yo my friends, I have the NYT for today and tomorrow because our fearless leader Amy is on vacay somewhere warm. Whadda we got? 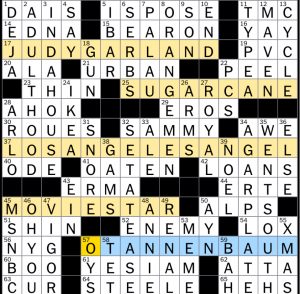 So this is Christmas and what have you done? Another year over, a new one just begun. And we have a reasonably Christmas-related theme. Sure; there’s a kind of syncretism so that even in the homes of Jews such as me, we have a tree, and it has your general American decorations on it, and the lights, etc etc. You know what? It’s been a good evening. I’m among those I love. Thing is, if you’re not, though — totally okay. This time can be a time to not engage. Not everyone needs to have a holiday with intense sociality. If you’re alone, or you have by choice separated yourself from your family of birth but you haven’t yet found your family of choice — I see you. Do what you need to do to keep yourself whole, and know that you are seen.

Fill-wise, doesn’t this feel a bit colloquial? YES I AM, YAY, I SPOSE. AH OK, IN DA HOUSE! I’m not particularly TYPE A when it comes to fill; we can sacrifice a bit of originality if the theme compels us.

Have a day, however it enacts itself for you; if you’re with a group — awesome. If you’re on your own, solving some puzzles — that rocks. Be you. 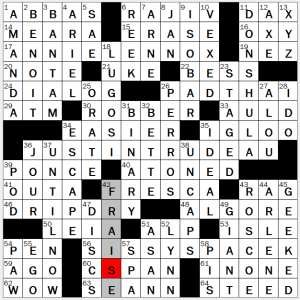 We have a timely offering for this week’s Jonesin’, as the title makes perfectly clear. Who has the fortune/misfortune (depending on your perspective!) of being born on Christmas Day?

There are likely others, but these three make a puzzle work. Lots of fun fill in here too, including a couple of pop culture refs I bet you don’t know. I think the imdb.com site lists whose celebrity birthday it is, be sure to check out that site today! A solid 4.3 stars this week. 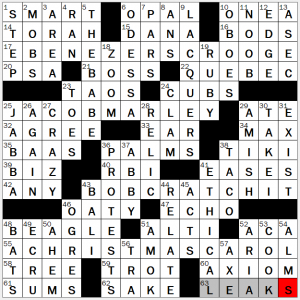 My Facebook friend Mark McClain has the holiday puzzle, with an appropriate holiday theme

This was a novella? All these years and I thought it was another Dickens book. I am not big into Christmas, so perhaps that is why I have never read this, but I know the story through different movies and plays I have seen. Three of those movies are referenced here: The first two are titled A Christmas Carol (one was made for TV), while the movie with Kermit was A Muppet Christmas Carol. Has this theme been done before? Probably, but perhaps not quite like this. And regardless of that, this one is well done. 4.2 stars today.

I will go take a nap now!