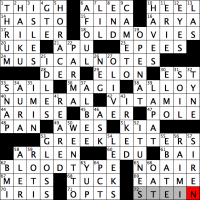 hello and welcome to episode #551 of matt gaffney’s weekly crossword contest, “In Other Words”. the deadline for this puzzle is on christmas day, so i’m writing this blog post in advance, even though i haven’t actually solved the meta. for this week 3 puzzle, matt challenges us to find a two-word phrase. what are the theme answers? there are six medium-long acrosses whose clue is just a single letter and either “for example” or “and others”:

what next? well, i have had various ideas about what to do, but none of them have gone anywhere. my first very good idea was that i noticed that 13d, {___ Vegas Raiders (soon-to-be NFL team)} LAS, could also be interpreted as the plural of LA, and hence could be considered MUSICAL NOTES. that looks good, doesn’t it? unfortunately it’s the only one like that in the grid.

what about {- (abbr.)} NEG? that looks like it must be related somehow to BLOOD TYPE, right? but how? well, you could combine the B from the clue with NEG to get a more specific blood type. do other things work like that? … no. it’d be cool if there were HIS or SIS (or IS, if two-letter words were allowable) that you could combine with P to make PHIS/PSIS/PIS, which are greek letters. but none of those are in the grid. lots of things could combine with M, too, to make other old movies; ARTY comes to mind.

i do think the title does suggest looking at other entries in the grid, or perhaps the clues. so does the fact that the grid has 80 words and a couple of cheaters, neither of which seems entirely necessary if the six theme answers above are the only grid entries constrained by the meta mechanism. there’s also some pretty clunky fill in areas without much theme constraint, so i think there must be more theme. if i had to guess, i’d say probably 6 extra theme answers.

with all these one-letter clues, i was drawn to some other clues with letter homophones, some of them seemingly forced:

now, there are plenty of letter homophones in any sufficiently long block of text. (it’s almost surprising there isn’t a “you” or an “are”.) so this would ordinarily not be worth remarking on, but it does seem in all four cases like matt went out of his way to include the homophone word. the thing is, if this is the mechanism, there really ought to be one of these for every theme answer, and there just isn’t. in particular, OLD MOVIES is a tough one, because the only other old movie of any note with a one-letter title is costa-gavras’s Z (1969), and that’s just not in the grid or clues.

of course, if we’re looking for alternate answers in the clues, nothing says they have to be one letter. they might also be disguised in some way—anagrammed, or perhaps one letter changed. the clue {www.iona.___} EDU definitely caught my eye, because matt could have used any school name there, but he chose one that’s a letter change away from iota, a greek letter. but this feels like entirely too wide-open a space to search, especially because most of the categories really are just sets of single letters.

is there another way to interpret the title? well, “in other words” could just mean alternate names for things. for example, the musical note labeled F is also called fa (in the default key of C major); the numeral L is also 50 (or fifty); the greek letter P is rho. so that’s interesting. but the film M is just M, and vitamin K is just vitamin K (it has a few different named vitamers, but those aren’t alternate names for vitamin K itself), and blood type B is definitely just blood type B.

welp, i’m giving up. i wish i’d had more time (and, more importantly, head space) to work on this one, because it seems interesting, but with the holiday, that just wasn’t possible. merry christmas to you if you celebrate christmas, and if not, have a great day!