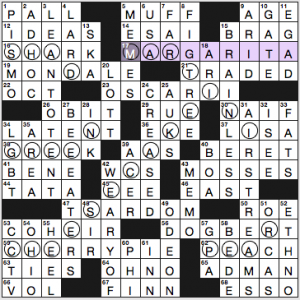 Have you had etiquette training in proper table place settings? Have you worked in fine dining and learned which forks go with which course? Today I learned that there are specific forks I never knew existed. Stulberg takes five particular forks that you probably use less than your standard dinner forks, and finds two words that fit the category for that type of fork—and ensures that the two foods start with the same three or four letters and that he can “fork” one of the food words off diagonally. So the fish fork at 16a gives you SHARK and SHAD. The cocktail fork (did not know that was a thing) has MARGARITA and MARTINI. Your common salad fork presents a GREEK salad and a GREEN salad. The dessert fork gives you CHERRY PIE and CHEESECAKE (awkwardly, CHEESECAKE’s diagonal butts up against an I from MARTINI and messed up my head). Last but not least, I never knew a “fruit fork” was a thing, but I’ve noticed since childhood that PEACH and PEAR start with the same letters (a vegetable, at that!). So this is an elegant concept and I like the execution much better than I usually do when there are diagonals forcing extra grid constraints.

Five notes from my solve:

LEAN-TO TENT feels weird, and I wasn’t wild about ESSO ETHNO OSCARII EEE TSARDOM COHEIR. But I did like the forking theme, and WEARY OF spoke to me. Four stars from me.

We have a WSJ debut today, so congratulations, Joseph!

The revealer is at 70a [Word that, when affixed to the first word of each starred answer, refers to a type of person], i.e. POT. 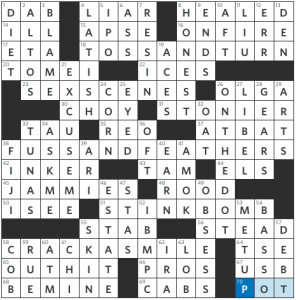 This is an interesting theme. I find it fascinating that each of these becomes an insult with the addition of –POT. Is there an etymological reason for this?

Beyond the theme we have really nice fill in EXCUSE ME, ON THE DOT, and my favorite, JAMMIES. The usual clunkers are there, too (TSE, ELS, and STAS being the worst of it), but nothing over the top. There are a heck of a lot of 3-letter words (25 by my count), where the upper limit is usually around 20. 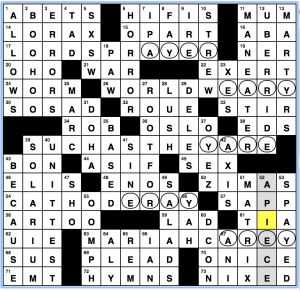 Happy New Year, All!  Now that it’s 2019, we can look back at 2018 with full clarity.  Specifically, we can look at the AV Club’s “Year-End Review”, from Brendan Emmet Quigley, with clarity, as it’s this week’s puzzle.  The name of this one gives the game away pretty smoothly:

This was a great puzzle to stumble into 2019 with – I loved the way the last across clue (“Put the kibosh on”, for NIXED) blended nicely into the first down clue (“Doesn’t put the kibosh on”, for ALLOWS).  Other nice fill: LORAX, Hall and Oates’ “MANEATER”, SOLARIUM, UNIT TEST, MATRIX, and SPAYED (clued as “Prevented from littering?”).  I didn’t love UBER RIDE – it felt a little green paint-y. 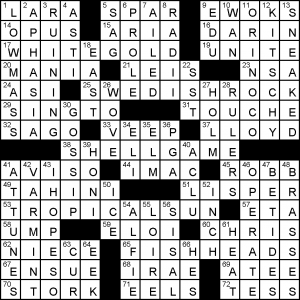 Apologies for the very late blogpost.

Today’s post is revealed with FISHHEADS, alluding to a notorious novelty song from 1978. Both parts of four theme answers satisfy ___ FISH, and although there are myriad fish types ending in fish, only a few are examples of such, Robin opting for more varied phrases. The entries are typically simple, but functional, though SWEDISHROCK is rather generic. So: WHITEGOLD, as immortalised in the Chronicles of Thomas Covenant is made up of WHITEFISH (seems to be a town in Montana?) and GOLDFISH. SWEDISHROCK is made up of SWEDISH FISH, a sweet brand in America, and ROCKFISH, another type of fish. SHELLGAME consists of SHELLFISH, molluscs, and GAMEFISH any type of fish considered for sports fishing. TROPICALSUN is made of TROPICALFISH and SUNFISH.

Your old-timey crossword-ese word to remember if you haven’t yet is AVISO, a small Portuguese (and historically) French warship.