Happy New Year! joon is taking a break, so this is Laura, presenting a collaboratively written post about a collaboratively solved puzzle, courtesy of a very wonderful solving group from around the world. Jeremy Koenig did the heavy lifting, with assistance from Eric Conrad, Zen Dexter, and Jesse Lansner.

Question: What Harrison Ford movie would complete this puzzle’s theme? 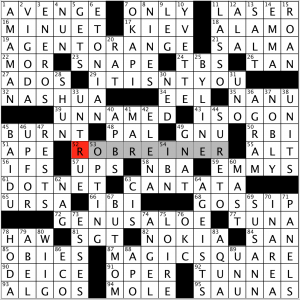 The grid fell pretty quickly for me until the SE and in the S the intersection of BUTMOM and GENUSALOE and IBI. Once the grid was filled and I was done cursing at GENUSALOE, I turned my attention to the starred themers:

With most metas, I’ll take what is offered and go from there. This works great for weeks 1-2, but typically gets me into trouble later in the month. This was the case here; I spent too much time thinking about how the themers are related. Did Rob Reiner direct a Vietnam War film about a math prodigy played by Harrison Ford? No. I visited the Wikipedia sites for each of the themers looking for some point of connection to no avail. Didn’t see much in the grid connecting to the whole themers except for some word squares (MAGICSQUAREs?) in the NE and SE.

The themers are made up of two parts, but looking at the first parts [AGENT, ROB, MAGIC] and the second parts [ORANGE, REINER, SQUARE] didn’t yield anything meaningful. Some personal rabbit holes and some from the collaborative solving group:

The time spent looking for connections here is a source of personal embarrassment and I was beginning to dislike ROB REINER merely for his puzzling presence in the grid. Sorry, Rob.

I noticed USA inside GEN(USA)LOE and NAM (Vietnam) inside UN(NAM)ED and thought maybe there was something in the grid related to a cross-country trip, so I looked for LA or NY on opposite sides (coasts?) of the grid, but nothing. Also, looking for Vietnamese cities spanning the country spelled out in the grid seemed too big a stretch.

The collaborative group came up with lots of ways to parse the title “Coast to Coast”:

Back to the starred entries with coasts on the brain. The “coasts” of the starred entries are AMAMAN/YVETTE, UNTRUE/SURETO, and BUTMOM/PANELS … all six-letter entries — is there something in each themer that takes it from “coast” to “coast”? Dead end.

A lot of picking around at the grid hunting for meaning and giving the stink-eye to GENUSALOE, then HODA came to the rescue. I noticed that HODA is an anagram for DOHA, a coastal city. Checked the symmetrical entry and noticed that ROAN anagrams to ORAN, another coastal city. This was a major turning point in the meta solve and the collaborative group set upon the grid in a display of anagrammatic beauty. Turning attention to grid “coasts,” you get the following anagrams:

Had an Indiana Jones plane-traveling-the-globe moment looking up all these places. (Doesn’t Indy visit TUNIS in Raiders of the Lost Ark?) Meta-hindsight 20/20 comment: the fill along the grid’s west coast is really suspect: AMAMAN, BAIDU, and HODA crossing ALGOS! This may have been a tip-off for some solvers-who-are-also-constructors out there, but I didn’t see it initially.

So, how are all of these “coasts” related? Can you travel to/from these cities? Maybe across a body of water or across a land mass? Turns out, yes, yes you can:

Also, we’re now dealing with four items (two rows + two columns) and we’re looking for a fourth themer. The three themers we’ve got connect to the above somehow. The remaining one will give us our Ford film. So, back to the themers! Hi, Rob.

Many thanks from the Fiend Team to Jeremy and the solving group for filling in!