The Fireball starts off 2019 with a bang. This is a great theme that is well-executed (in general). It’s much more challenging than the Fireballs that closed out 2018.

I struggled to get a foothold and wandered around plunking things into the grid for a while. There was no evident wordplay in the theme answers, and 18a, the first one I came to, is so obscure I didn’t even try to figure it out. I finally managed to suss out the theme entry at 47a and thought I had it, only to get stuck again at 60a – and then I finally got the whole thing and was able to go back and fill in the other theme answers. Each theme answer has a rebus square requiring a number (written out) and the down number is double the across – hence the title of the puzzle. Clear as mud? Let’s look at the answers. 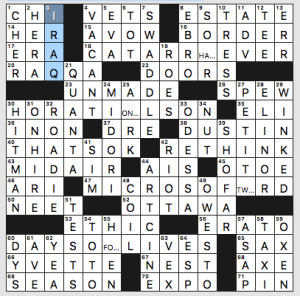 The utter obscurity of CATARRHAL FEVER made this even more difficult and felt a bit unfair (although I’m sure Gareth enjoyed it). I was also led astray when I filled in AT IT instead of AT WORK for 25d. The payoff when I figured it out was worth it, though.

Nicely designed theme today in which the clued entries have been clothed in OUTERWEAR (57a, [L.L. Bean offering, or a feature of the asterisked answers]). The entire package (the clued theme entry plus the outer garment) comprises a new (unclued) word or name. 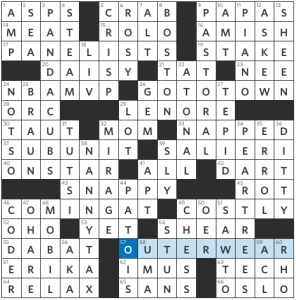 It would have been cool if each entry made logical surface sense the way the first one does. That is, ELIS wearing PANTS makes sense, as does TOTO wearing a GOWN, I suppose. But the others don’t.

No doubt these theme entries were hard to find. First, you have to find phrases that have outer garments, keeping in mind there are multiple configurations for where the break lies (for example, PANTS is broken up here as PAN*TS, but PA*NTS could also be used or P*ANTS, etc.). Then the hard part is combing through the possibilities and looking for real words once the OUTERWEAR is removed. I wonder if Alex found a way to automate that process or if he just looked through all of the possibilities himself.

Given that the level of difficulty in finding sufficient theme answers is pretty high, I’m okay with COMING AT and the fact that there isn’t any surface sense to a BUN wearing a SUIT, for example.

(Oh hey, I managed to find my own interesting example: A HERO wearing a TUX becomes writer Paul THEROUX, author of The Mosquito Coast. Cool.)

Looking at the fill, we have adorable PANDA CUBS, as well as PASTORAL, NANNY TAX, LENORE, PATOIS, and PEAR TREES. I’m partial to the latter, given that my last name (Peredo) means “pear orchard” in Portuguese. NBA MVP [Dr. J, for 1980-81] was hard to parse, but the crosses seemed fair. Everything else felt CRISP and SNAPPY.

A really nice Thursday-worthy puzzle today with a clever theme and lovely fill. 4.25 stars from me.

We’ve had a lot of heavy discussions on this site lately (and we’re only three days into the new year!). So how about some PANDA CUBS playing on a slide? 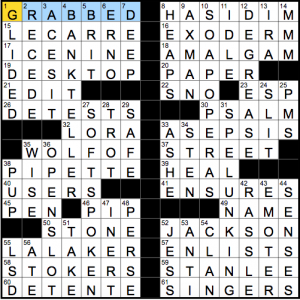 Another very visually striking Thursday grid this week! The first thing you probably noticed upon first looking at this puzzle is that it’s split into two unconnected halves by a grid-spanning line of black squares. That’s generally a huge no-no, so the fact that it’s in the NYT (on a Thursday, no less) must mean it’s integral to the theme.

And indeed it is–as it turns out, it’s a WALL separating the two sides of the grid (I checked to see if there was some Berlin Wall-related anniversary that coincided with the publication of this puzzle, and… not really. 2019 is the 30th anniversary of the wall coming down, but that happened in November, not January.) But lo! The wall is not impenetrable. At three spots the grid, there’s an entry you might imagine having a WALL rebus square in the black square separating its two halves. Like so:

This is a really neat idea. Like last week, it does something unusual with crossword conventions. This time, what’s unusual is that it breaks a cardinal rule of crossword construction: namely, that the grid must be fully interlocking (no part of the grid can be isolated from the rest by black squares). It was very cool to try to figure out why there was a huge line of black squares running through the grid, and fairly satisfying once I did.

Of course, the interlocking rule exists for a reason: there’s a very real trade-off here in that the puzzle played very much like two half-puzzles rather than one whole puzzle. I enjoyed solving this puzzle a little less because of its disjointed nature, though I can’t say whether I’m in the majority or I’m a marginal case. I had an especially rough time because I started on the right side of the grid, so I didn’t encounter any of the theme clues until about 70% of the way through my solve (once I got to the left half of the grid). The whole right half of the grid played like a mini-themeless for me.

I really liked the three choices for the theme answers: they felt fresh, and they used “wall” in three fairly different ways. I was very much on Timothy’s wavelength with respect to the fill, but I can see how those wide-open corners could be very tough, what with EXODERM and DEGREASE and ASEPSIS and STOKERS, plus plenty of proper nouns & trivia (which I love but which I know is divisive).

All that said, I thought the fill was really good. It may have been helped a bit by the fact that the grid didn’t fully interlock, but nevertheless I thought those big corners had some cool stuff (ICE-NINE, STAN LEE, L.A. LAKER, HASIDIM). Nothing jumped out at me as particularly ugly–just the few potentially unfamiliar words mentioned above.

[Lightweight boxer?] was a lovely clue for PUP, and it crossed another nice, tough clue: [Boardom?] for PEN. Killer crossing! That was one of the last things I filled in.

Overall, I thought this was a unique, well-made Thursday puzzle that provided an appropriate challenge. Until next time! 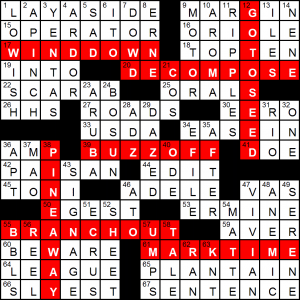 This puzzle features a collection of “Old x’s never die” snowclones. I feel like I’ve seen a million of them in my time, be they at the footnote of a Reader’s Digest article, or on some kitsch beer glass or whatever. Pretty sure if you Google you’ll get a list of them… We get seven today. Maybe if you somehow have avoided these jokes all your life you’ll find this fresh. I dunno.

I did enjoy PAISAN, as a quaint bit of high-end vocabulary 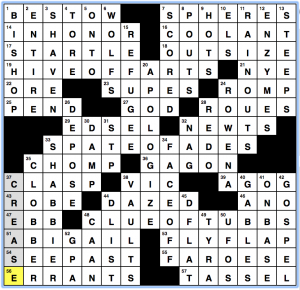 I love the theme on today’s BEQ.  It’s simple, the title of the puzzle tells you EXACTLY what’s happening, and it’s well-executed.

Let’s dive in to “Shuffling Cards”:

Spoonerized playing cards!  We’ve got the five of hearts, eight of spades, and two of clubs up there.  I love that this didn’t play with any of the cards you’d expect (no queen of hearts or ace of spades, which don’t spooner well).

Gorgeous grid on this one, and some other great fill beyond the themers: BESTOW, COOLANT, EDSEL (clued as “Detroit car bomb”, which I loved), FAROESE (as in those that live on the Faroe Islands near Denmark), RAINOUTS, GABLES, and D LIST