The Chronicle of Higher Education crossword is still on winter break. We hope to provide access to the puzzle file when publishing resumes next week.

And then the week after that, the first Inkubator puzzle comes out. I had dinner with Laura Braunstein tonight (she and Tracy Bennett are heading up the Inkubator) and learned that the debut puzzle is by a rookie. I am so looking forward to the puzzles from this new venue!—Amy 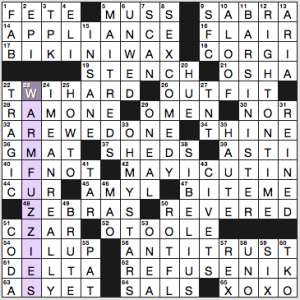 This puzzle both gave me the WARM FUZZIES with some fill and had me cringing at some other fill. First up, the pluses: BIKINI WAX, TWIHARD (a diehard Twilight fan), RAMONE, “ARE WE DONE?”, “MAY I CUT IN?”, “I MEAN, REALLY“, MAITRE D’S, SEX COMEDY, and RIGHT ON TIME. The 65a. [Short and sweet sign-off], XOXO, is also cute.

Did not enjoy crosswordese SABRA (9a. [Certain Mideast native], an Israeli in particular) crossing SFC (9d. [U.S. Army E-7]), and I suspect a great many hard-copy solvers will either have a blank there or an incorrect letter.

The opening corner hit me with EPI with a weird clue ([Prefix with cycle]) and TPK ([E-ZPass site: Abbr.]), ungainly. Basically, I was mad at the puzzle and expecting a lousy solving experience. Constructors, it is worth the extra effort to polish up your 1-Across corners to warmly welcome your solvers into the puzzle, instead of leaving them to expect the worst.

When REFUSENIK is a showy word (anyone else try to stretch RESISTER out to 9 letters to answer [One who illegally ignores orders]?), maybe let’s not clue CUR as a 44a. [No-goodnik]. The extra -nik is distracting. 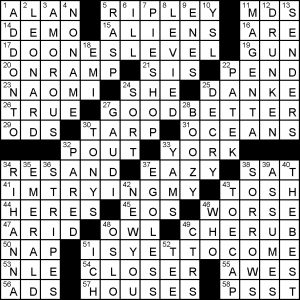 This puzzle’s theme is moderately ambitious, but it really doesn’t fit together well. THEBEST/ISYETTOCOME is a two part cross-referenced revealer. We then have three phrases with an omitted BEST. DOONESLEVEL(BEST) and IMTRYINGMY(BEST) are absurdly close to each other two be two separate themers. Even GOODBETTER(BEST) doesn’t go very far. I’m not sure if WORSE is thematic or not.

If you have a cross-referenced theme revealer or theme answers, I personally don’t like have all-sorts of other cross-referenced clues in the puzzle. DRUNKEN gets tacked onto BOOZY, and RIPLEY to ALIENS, the latter being a more specific connection. That looked thematic when I started solving.

I finished with an error at SI? / ENE?. I put a G, although SIEG is the Nazi cheer, and who’d put that in a puzzle… Never mind. I’m not sure how SIS starts a cheer, I know there’s sis boom pah, but isn’t that just a tuba sound effect? ENES is not a surname I’d have guessed, but it’s at least a real thing unlike “plural chemistry suffix”, which is made-up for constructor convenience.

There are some other difficult names splattered around that are worth noting: [Catalonian architect Antoni __], GAUDI; [Luxury watch brand __ Philippe], PATEK. NEWYOU was my favourite answer in the puzzle, even if it evoked a lot of advertising mumbo-jumbo.