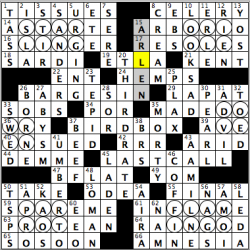 Hello there, everyone! Well, given the popularity of the movie, in the form of numerous memes, countless references to it in other platforms and a “challenge” spawned from it, there’s no way around this fact: BIRD BOX is everywhere (37A: [Post-apocalyptic drama thriller starring Sandra Bullock])!!! Today’s crossword is the latest homage to it — and probably the most clever! A series of circles in six sections of the grid form a “box,” and the letters inside of the circles — read from left to right and continuing onto the second line of circled boxes — spell out an actual bird. I was slightly tempted to finish solving the remaining entries blindfolded once I figured out the theme, but having “EWRYTHBM” or “NUYKJUY” as answers to clues wouldn’t look too pretty…and they would be wrong.

This was probably the toughest solve I’ve had on here since regularly solving the CN puzzles, as I got hung up a few times, especially at the crossing of ARLEN (15D: [“Over the Rainbow” composer]) and ET LA (19A: […____, títe, Alouette,…” (song refrain)]). Initially put in “abyss” instead of ABYSM, and that took a little longer than normal to untangle that last letter (27D: [Deep cavity]). ARBORIO would have been even tougher to get if not for the Emergency Broadcasting System, or EBS, as one of the crossings (9D: [Old FCC warning service]). As I’m tying this sentence now, the unmistakable, long-lasting tone during one of those tests is in my head. Ugh! However, this is only a test…and not a FINAL (55A: [Major exam]).

The fill in the corners, even when not including the non-themed entries, was really good, and loved entries like SO SOON (65A: [“What’s your hurry?”]) and AMNESIA (66A: [Jason Bourne’s affliction]).  Yes, there’s “Bourne” in that clue and BORNE as an entry elsewhere in the grid, but I’m not chafed by that at all (26D: [Wind-_____ (carried by a breeze]). Then there are entries like BARGES IN (26A: [Enters without knocking]) and THIRD RATE in the middle of the grid that are wonderful entries as well (20D: [Hardly the best]). Here is hoping you did not mind this third-rate review of the grid before transitioning to the sportsball portion of it, which features an entry that probably was very tricky for non-sports enthusiasts…

“Sports will make you smarter” moment of the day: YOST (13D: [Legendary football coach Fielding ____]) –  In the first part of the 20th century, Fielding Yost was probably the preeminent head coach in college football, leading the University of Michigan to 10 Big Ten Conference championships and six national championships on his way to accumulating a 165-29-10 career coaching record while at Michigan. Many of his teams in the first few years of the 1900s regularly scored over 40 points during games, something that helped in the initial popularity and interest that was built in the game of college football in the United States. Yost served as Michigan’s athletic director from 1921 to 1940 and the Yost Ice Arena, home of the very successful University of Michigan hockey team, is named after him.

Thank you so much for your time, everyone! Let me know how your attempt at the Bird Box challenge goes! Have a wonderful day and, as always, keep solving!!

In August 2018, Alison debuted with Erik in the NYT and, now, we’re treated to her WSJ debut and her second published puzzle with Erik. Congratulations, Alison! We’re looking forward to many puzzles to come!

We have quite the tasty theme today … which made my healthy new year eating plan all the tougher! :D 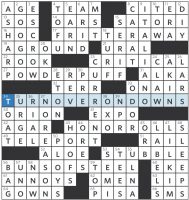 17A: FRITTER AWAY [“Get thee gone, fried fiend!”?] – This is exactly what I’ve been saying to all the delicious morsels that have crossed my path since I got back on the healthy eating wagon!
27A: POWDER PUFF [Apply talc to a flaky pastry?]
34A: TURNOVER ON DOWNS [Why the breakfasting crossworder could only read Across clues?] – I know quite little about sports, so I had no clue how to even parse this themer when I finally finished it by getting the crossing entries. Sure enough, it’s a quite common American football term. Go sports!
43A: HONOR ROLLS [Write an ode to conchas?] – In college, I studied for a while in Uruguay. The word conchas has quiiiite a different meaning there…
56A: BUNS OF STEEL [What novelist Danielle eats for breakfast?] 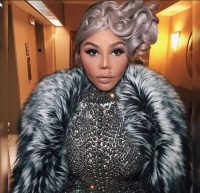 I appreciated the clue [Jazz or Blues] for TEAM and the acknowledgment of the faulty CLAW in nearly every arcade. And it’s not a mistake that CURRENT runs right down the center of this grid – any puzzle Erik Agard touches feels exactly that. All in all, a solid puzzle and wonderful WSJ debut. Hooray! 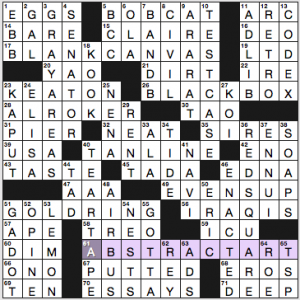 If you gather together the six answers to the starred clues, you get a BLANK CANVAS, on which you might paint a more literal BLACK BOX, TAN LINE, GOLD RING, GRAY AREAS, and a RED SQUARE and create a piece of ABSTRACT ART. The constructor explains (at Wordplay), “After seeing a Kandinsky painting one day, I wondered if I could also build an abstract crossword “work of art” using shape and color elements. I quickly settled on the idea of using entries that are not normally treated as colored elements to be reinterpreted as such.” Kinda cool conceptually. 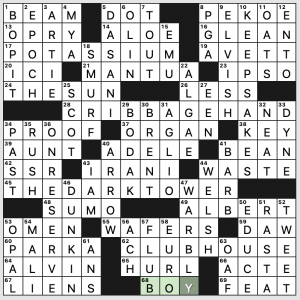 I half thought there would be 19 references to 19, knowing Matt, but that is likely impossible for a daily size puzzle. That would be a lot for a Sunday puzzle! This puzzle is rife with pop culture refs, as is expected from a Jonesin’ puzzle. A solid 4.6 for this one, which is actually the SECOND Jonesin’ of 2019! 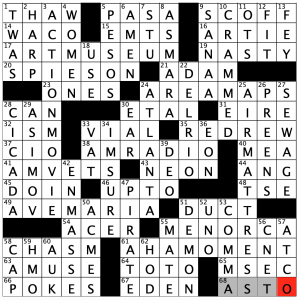 Did it Tuez? I hear that is a Crossword Twitter thing, but I must not be following the correct people. I thought I was! Maybe I have the wrong notifications turned on! I will let 38A explain what is going on:

I am sure the day is far in the future that there will be a call-in show about crossword puzzles, but maybe I am totally wrong! Let’s start one up! Perhaps on satellite radio so it reaches everyone!! All of these answers have the initials “A.M.”, and there is also the bonus AMVETS at 41A. There are other instances of the consecutive letters AM in the grid, but I don’t think it detracts from the solving experience. I had to actually look closely to find them. I don’t know what my time was; I forgot to start the timer evidently. A solid 4.4 stars from me today.

I hope your Tuesday doesn’t “Tuez!”