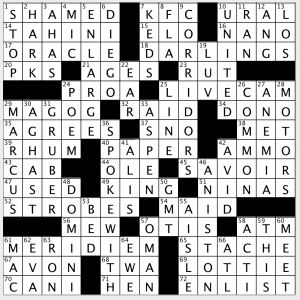 Howdy, folks! Evad back in the critic’s seat for this week’s Wall Street Journal contest puzzle. We’re looking for the two-word name of a U.S. location. . With only 2 9-letter and 2 8-letter entries, I turned to the clues to find our theme material. I found 7 that follow a similar pattern (and also echo the puzzle’s title):

So my first stab at the next step was to look for the other half of these two-word phrases in the grid. I came up short, but pretty quickly noticed some anagrams of the words I was looking for; in particular, LOTTIE for TOILET and GRUBER for BURGER. Hoping these weren’t just serendipitous accidents, I looked for the others. Sure enough, I found all seven: 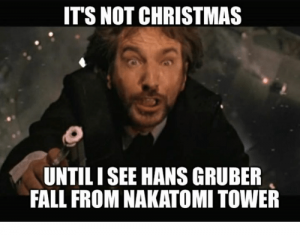 Rearrange those 7 starting letters, gets you to ANGELES, which is indeed “part” of a two-word location in the U.S. It did bother me that the accompanying LOS wasn’t part of this mechanism, but after a nudge from a friend, I saw that 13D. [___ Lobos, “La Bamba” band] clued it. Not only did this make the meta feel more complete, it also added the two-letter abbreviation, LA in the clue (albeit with a minuscule “a”).

I’ll close with my favorite clue, 14A.’s [Dip in the Mediterranean], which didn’t reference a geographic feature, but the dip for pita (most commonly found in hummus in my culinary adventures), TAHINI. Happy 2019 to all!