Good news! You can still access the Chronicle of Higher Ed crossword via Fiend’s “Today’s Puzzles” page. Each Friday’s puzzle (during the weeks that the CHE publishes) should be available the Monday preceding. Thanks to editor Brad Wilber, Fiend webmaster Dave Sullivan, and server guy Martin Herbach for setting this up.

This week’s AVCX is a contest puzzle from Francis Heaney. We’ll have a full write-up once the deadline for entries has closed. 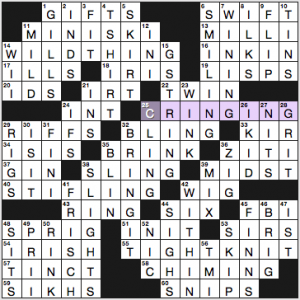 The theme is the letter “i” and that is the only vowel in this grid. I think I spik fir ill if is whin I … Okay, I can’t do that. I think I speak for all of us when I say “thank dog the clues are regular and don’t obey the same restraint, because that would have been horrendously unfun.”

Listen, if you are sending a letter anywhere in 2019 other than the Vatican, your [Formal letter opener] had better not be SIRS. Is there no way to clue that word other than via an antiquated exclusionary convention that nobody decent is still using? (Narrator: “There is.”)

Some of the fill is zippy enough—your “WILD THING,” TIGHT-KNIT, “BRING IT!” But that doesn’t make up for the overriding dryness of a “theme” that is absent any humor or wordplay. It felt STIFLING. I was CRINGING rather than SMILING when it came to things like MINISKI and the parade of IDS IRT INT INIT ISIT INS INI INKIN WITHIN IST.

Barely recalled at all, but pieced together with crossings: 41d. [Otto who worked on the Manhattan Project], FRISCH.

2.5 stars from me. I like the crossword to be less of a rote “just fill it all in” and more of a battle of wits. You know those cheap newspaper puzzles with unthemed grids with high word counts (meaning not a ≤72-word themeless with longer fill)? That’s the vibe here. Did you like it better than I did?

Today we’re given well-known phrases, except that parts of them have been messed up and anagrammed into types of bugs.

I love the double meaning in the title. It usually refers to instances when little things go wrong, for example when letters get mixed up in a phrase. But not only do we have mixed-up words, those mix-ups change those words into bugs. It all points to an infestation of some annoying but smart PESTS (67a, [Anagrammatic intruders in this puzzle’s longest Across answers]). 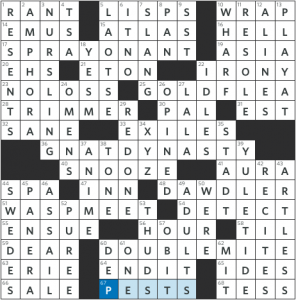 Cute little theme that kept me guessing until I got to the revealer. 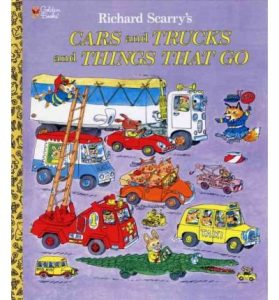 Since I actually was timing myself today, I didn’t really pay close attention to the fill. But YULETIDE is nice while NURSLING seems pretty uncommon — though less so than its neighbor AMPHORA [Old olive oil container]. Nothing else strikes me as notable, though it’s all solidly made. 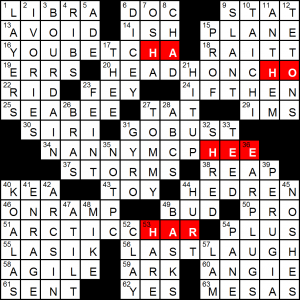 The theme is fairly simple, if a little oddball. It’s dedicated to those [Laugh syllable] clues we mostly love to hate. The revealer is apt – LASTLAUGH describes concisely what is happening, and the themers are varied. There is stacking on two of the pairs, but despite this being a DICEY tactic, the letters are well-chosen and the surrounding grid such that little collateral damage occurs.

The grid in general is much cleaner than most we’ve seen this week. Very few short, tired answers, and even less short, contrived answers (which IMO are far more annoying). Instead, the most difficult answers are likely the longer [Italian city that hosts the annual Eurochocolate Festival], PERUGIA, a decidely third tier Italian city; and [Inverse trig function], ARCSIN, which has remained for me a mysterious button on my calculator no-one even explained after a year of university mathematics…