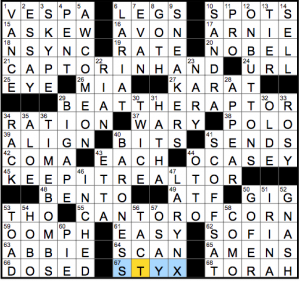 Hello all! Congrats to Jeff on his NYT debut!

It feels like it’s been a while since there’s been an easy-to-explain Thursday theme; mercifully, Jeff and Derek have given me just that today. The revealer is at 68a, TORAH [Sacred text … or your reaction upon figuring out this puzzle’s theme?]. Each of the four theme answers is a phrase with “TOR” added. (“Ah!”) Hilarity ensues. Like so:

This was a cute theme. The revealer — “TOR, AH!” — is cute, and having CANTOR in the theme answers only added to the theme’s delightfully Jewish flavor. Does the theme reinvent the add-a-letter wheel? No. But it was nicely executed, and I like seeing this theme type from time to time. I was very surprised to see this puzzle on a Thursday, though! I found both the theme and the difficulty very Wednesday-ish.

Interestingly, this grid is 16 columns wide. From the constructors’ side, the main reason to do this is that it makes accommodating the theme answers’ difficult lengths (12/13/13/12) much easier. You’ll most often see this trick used when the themers consist of a pair of 12s and a pair of 12-14s.

Entries and clues of note:

And here’s the reversed byline from Mary Lou Guizzo and Jeff Chen’s 12/27/18 puzzle, screencapped from the NYT applet.

Other than it being a Wednesday masquerading as a Thursday, I thought this was a fine puzzle. Nice job!  Until next time!

I finished the puzzle quickly with Mr Happy Pencil appearing right on schedule, and could not figure out the theme. I had the revealer: 31a [With 55-Across, policy for some beaches … and for solving this puzzle], CLOTHING OPTIONAL. I looked for a rebus containing clothing – nope. Looked for a Schrodinger puzzle with words that could turn into pieces of clothing – nope. Finally decided the heck with it, because I wanted to be done to take my daughter out to dinner, and looked at Peter’s Email. There are 16 clues that work with or without one letter: 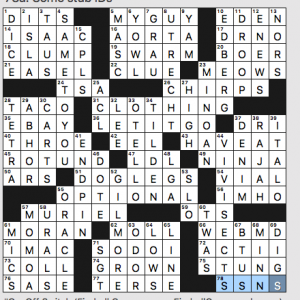 The letters removed to make the alternate answers are CLOTHING.

This is not my cup of tea. This is why I don’t much like metas – my brain doesn’t see these easily and it feels like way  more work than I usually want to do in a puzzle. On my first pass through this post, I wasn’t even that impressed with it – and then I realized the downs worked, too. It was LIE/LINE that made the penny drop. NOW I’m impressed. REALLY impressed. That’s an “aha” moment worth struggling for. Wow.

What I didn’t know before I did this puzzle: that GRAU is German for “gray.”

Movie titles are on tap today…with a twist. These “twists” occur, appropriately, at the final words which are turned upwards and clued normally in the Down direction. 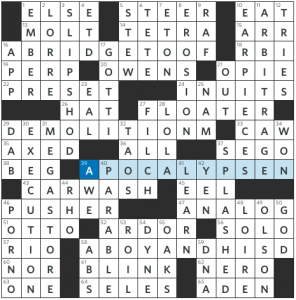 Nice theme. Would have been nicer if there was some diversity here as far as the starring actors.

At first I wasn’t sure what was connecting these film titles until I realized they all ended in three-letter words that could spell something else when read backwards. Given that limitation and the need for symmetry, there probably aren’t a whole lot of titles that could work here. For example, SOME LIKE IT HOT and ALL ABOUT EVE couldn’t be used.

Plenty of long fill to remark on, the highlights being the stacked 9s in the corners, especially EARPIECES and MEGASTORE. SLIPSHOD is great and is almost an anagram of its counterpart SPLASHED. We also get PARABLE, CARWASH, and FLOATER.

And in the inaugural edition of Cartoons Will Make You Smarter (while shamelessly stealing Ade’s sports-promoting bit), learned scholars will recall that 5d [Hasenpfeffer, e.g.] is a STEW thanks to the 1962 Bugs Bunny short in which Yosemite Sam is tasked to make Hasenpfeffer for his king. The word comes from the German Hase for “hare” and pfeffer for “pepper.” Of course, things don’t go the way Sam plans them. (Here’s the full cartoon, though you have to suffer the ads to watch the whole thing.) 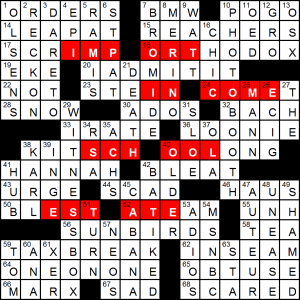 A lot of us probably went through this puzzle puzzled as to where the theme went. At TAXBREAK, we get a revealer that’s a lot less illuminating than most. It just says four squares represent a “tax break”. Turns out that types of tax are hidden across two entries as highlighted. On the one hand, it’s a little different to most “hidden letter string” themes. The downside with this angle is a lack of interesting long theme answers, though KITSCH/OOLONG is a nice pair.

There weren’t too many long answers to highlight neither in theme nor otherwise. The splashiest were probably some nice long vocabulary words like ORTHODOX and BROMIDE. There were another three pairs of “clue-chained” short answers, which are rarely my idea of a good time: KARL/MARX is a fair cop, as is perhaps OOLONG/TEA, and then there’s THE/URGE. 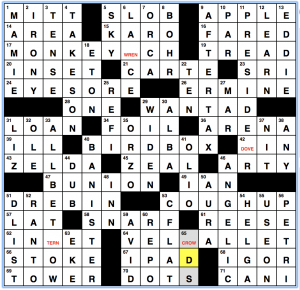 Howdy, all!  This is going up later than planned, but I’m here and I’ve solved the puzzle, so that’s at least something.  Let’s dive in to “Come Fly With Me”:

Birds. Boxes. It’s an okay theme that’s timely, but the lack of symmetry for the theme entries bothers me and makes this far less elegant than it could be.

I haven’t watched BIRD BOX but I have watched both episodes of The Masked Singer multiple times. It is the dumbest premise and is something that would be on in the background of a dystopian comedy as a throwaway gag and I love it with my whole heart.

The rest of the fill is pretty good – I liked the symmetrical placement of EYESORE, ERMINE, DREBIN, and COUGH UP, and AFTER TAX and BANISTER were nice as well in the down fill.

A step down from last week, but it’s fun and timely.