This week we’re looking for an 11-letter noun. Let’s try to find it! 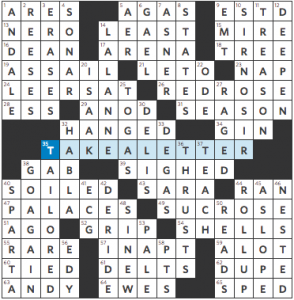 First off, there are no apparent theme entries — but there is one long central across:

Oh, that kind of dictator. Like Don Draper in Mad Men. Okay! Do people really do that anymore? Even most high-level executives likely type their own emails these days, I’d bet. (High-level executives who read this blog: Please dictate a comment to your secretary.) I’d also bet that it’s some kind of direction for solving the puzzle.

But from where do we take said letter(s)? I was letting my mind wander a bit until I took another look at:

Take the letters that have been added to the highlighted clue words to make the grid entries (again, in grid number order) and you get STENOGRAPHY — the ancient art by which scribes — usually women — would listen to dictators — usually men — say stuff, take down those words in a mystical script called shorthand on something called a steno pad, then type up those words (on a machine of yore called the type-writer), maybe while doing so make a carbon copy with a magical technology called carbon paper (ever wonder what CC stands for in your email header?), then either send the letter through interoffice mail, or fold it thrice, stuff it in an envelope, and post it.

I was discussing this puzzle post-solve with frequent collaborator Sally J. Reese, who felt that using words like are, and (twice), and in were “a bit of a cheat” — and I see her point, given that they weren’t as immediately apparent as the longer words. And those were ones that I had to back-solve to find, once the likely answer emerged. But it works nicely that the clue-word and the grid-word have the letters in the same order. It’s also cool to be reminded of a retro practice like stenography (less cool to consider the sexual politics of the workplace that went with it), which many people still employ in certain contexts.