This puzzle has the sense of humor of a preteen boy. It also has circles, and I didn’t mind them too much.

Each theme answer contains something DISGUSTING, as pointed out in 57a, [“Gross” title for this puzzle].

I don’t like gross-out humor in movies, where the grossness is visible. I liked it here. It’s a fresh, fun, Monday-accessible theme. Was it perhaps poking a bit of subtle fun at the breakfast test?

What I didn’t know before I did this puzzle: it’s Monday and there aren’t any video game references. I got nothing.

This puzzle is more than just O.K.

Really. The theme is EVERYTHING’S OK (34a, [“It’s all good,” or a hint to the starred answers]), but there are plenty of things to like here. 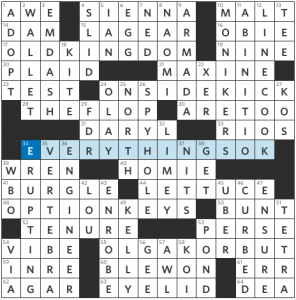 This team of puzzlers has had numerous grids published in the NYT, but I think this might be the first one in the WSJ. Hopefully it won’t be the last.

This one’s simple and sweet. Just right for a Monday.

That said, there were definitely some things that slowed me down. I’ll get to that in a minute, but those are some beauteous corners (NE/SW) with triple-stacked 8s (which all cross two themers(!)). I especially like the NE with MONIKERS, LINE COOK, and the new-to-me AB INITIO. For some reason, I wanted AB INITIA, but thankfully it’s pretty clear that last letter needed to be an O. These three cross the irrepressible MAXINE [California congresswoman Waters]. The SW is nice as well with VERTEBRA and ENGINEER crossing one of my favorite words: BURGLE.

Things that slowed me up: ORANGE instead of the correct SIENNA (4a, [“Burnt” Crayola color]), PLEAT and then (strangely) PLAIT instead of PLAID (20a, [Kilt feature]), and SECURE instead ENSURE (47d, [Make certain]). But the thing that threw me the most was that I was convinced DDE was the [Pres. on a dime] (29d). This resulted in THE DLOP at 28a [First three community cards in Texas hold ’em]. It didn’t help that I’ve never played hold ’em, so for all I knew, that was correct. Obviously once I sorted out the central revealer, everything “flopped” back into its proper place. As you can see, all of that is pretty much the fault of my own brain misfiring, not through any problem with puzzle.

Other goodies: SPYHOLE and EYELID to go with Andy’s EYEPIT from yesterday’s NYT. Similarly, MALT appears here as well as in the theme of Andy’s NYT grid.

This was an O.K. start to the week that was better than just okay. 3.6 stars. 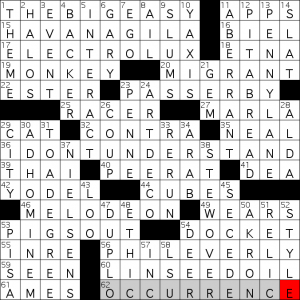 hello! joon here with the recap of patrick berry’s new yorker crossword. my custom is to solve these puzzles using only the down clues, and i must say that in the few short months i have been doing this, i have noticed that i have a much easier go of it on the weeks when patrick or liz constructs than when it’s one of anna, natan, or kameron (although there was a recent anna puzzle that i managed pretty well on). perhaps my sensibilities are more in tune with the two constructors who are (i believe) somewhat older than me than the three constructors who are (i believe) all younger than me?

whatever the case may be, this was my fastest downs-only new yorker solve, and it all went very smoothly. part of what made it easier downs-only was grid design: the single black squares splitting 14- and 29-down into two 4s instead of a 9 meant that i didn’t have to contend with entire corners of the grid where every answer was a long down, making it easier to put together the answers piece by piece instead of having to break in by answering one of the clues to a long answer without any crossings. but i also pleasantly surprised myself by being able to immediately enter 1-, 2-, 3-, and 4-down, which then gave me HAVA NAGILA at 15a and MONKEY at 19a, and before i knew it, one corner of the grid was already done.

i should probably mention here, although perhaps i don’t need to since i did already say “patrick berry”, that the grid is squeaky-clean. that helps, too, when you’re solving without some of the clues and need to rely on the crossings turning into familiar entries. that’s not to say there was nothing unfamiliar to me in the grid—i didn’t know the vacuum cleaner brand ELECTROLUX or the musical instrument MELODEON, but both looked pretty right once i had the letters. i wouldn’t say there are a lot of marquee, “look at me” seed entries either, but it’s a patrick berry puzzle, all right. just lots of natural-looking words and phrases and an absolute minimum of crosswordese and junk.

down clues i enjoyed:

it looks like i lucked out a bit, in that most of the cleverest clues were among the downs. scanning the across clues for the first time, i see {List of things to try?} for DOCKET, and that’s a fun one.

although the puzzle did land on the easy side, it was still very fun and good. 4.5 stars from me.

You won’t be “give or take” on today’s nice offering from C. C. Burnikel! 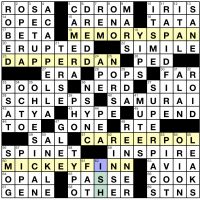 18A: MEMORY SPAN [Recall ability]
23A: DAPPER DAN [Well-groomed guy]
51A: CAREER POL [One making a living in government, briefly] – And one who should be ending this ridiculous shutdown so that hardworking federal employees can get a paycheck and pay their bills!
60A: MICKEY FINN [Knockout drink, in old gangster movies] – I’d be decidedly less excited about this entry if it were included by a male constructor.
62D: ISH [“Give or take” suffix … that can be added to the end of 18-, 23-, 51-, and 60-Across to form a sort of set]

62D is an unusual place for a revealer, but it works. Adding ISH to the last word of each themer gives us a nice set indeed – SPAN-ISH, DAN-ISH, POL-ISH, and FINN-ISH – which are all European nationalities. This is a neat theme idea that felt like a fresh way to mix up the “consider the first/last word of each theme entry” type theme. And there don’t seem to be many more European nationalities that end in ISH, so it feels like a nice, tight set. Thumbs up from this solver!

Other random thoughts:
– It was so lovely to start at 1A with ROSA Parks! Her act of bravery might not have been as unplanned as lore might suggest, but it was important and impactful all the same.
– I really enjoyed SCHLEPS crossing OH YES I CAN. That section felt fun and empowering.
– Ugh to SUPER PACS crossing CAREER POL. Not because they’re bad entries at all, but because those two things seem to be having a lot more influence on the way our country is going than they might should.
– I appreciated that SANE [Fit to be tried] and FAT [Budgetary excess] were both clued in ways that weren’t demeaning. 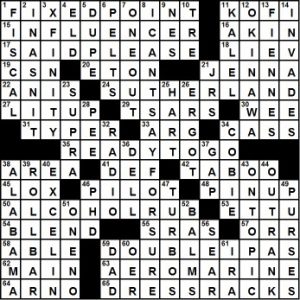 Finishing in 21:12, with a lot of wild guessing down the stretch, I was humbled, to say the least. This puzzle is full of really nice stuff, but those items are not alone. They have company from a different class. There are some really clever clues. And some things that don’t much admit of clever cluing.

I got a late start, but ultimately was READY TO GO at this puzzle by late afternoon. Maybe I’d have benefited from an ALCOHOL RUB and a couple of DOUBLE IPAS. But alas, I would not EXCEL IN solving this puzzle. I would learn that I’ve been misusing FIXED POINT. Who knew that it was a mathematical term of art, [A reproducible invariant temperature in physics, e.g.]? I will not tell exactly how I’ve misused it. I bet other non-math-and-science guys out there have misused it in the same way. The crossers were of little help, as I’d locked in on OLD, rather than ELD and was unfamiliar with Fios, so could not get XFINITY on its own. I have more excuses, but they’re really boring. And when I saw the clue [5/2(sa), for a pentagon] at 38a for  AREA, I entertained the thought, however fleetingly, that maybe BEQ’s inner scientist was showing off.

As for 15a [Social media marketer] INFLUENCER, I was looking for a term of art, instead of this totally legit word that no one every really says or writes. And at one point the crossers were showing me IN?LUEW??, since I had guessed wrong early with TWO-OUT where ONE-OUT was called for. Forgive me, that was not very polite. Speaking of which, [Was polite, e.g.] is a nice clue for SAID PLEASE at 17a. Shoulda been real easy. I made it hard.

Kudos for 63a [Concerning over-the-ocean flying] AEROMARINE, for 65a [Places for some baby dolls] DRESS RACKS, and for the original clue [River the Ponte Santa Trìnita bridge spans]  for ARNO at 64a.

I did not know 18a [“Spider-Man: Into the Spider-Verse” voice actor Schreiber] LIEV, though I now see that I should have from many other crosswords. Plus, I did not know JENNA Jameson at 21a or FIENNES at 13d. Other than that, I CAN’T SAY FOR SURE exactly why this puzzle gave me so much trouble.