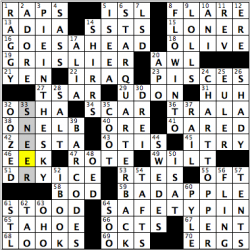 Good morning, everyone! For those of you that were caught in the snowstorm that affected about half of the country over the weekend, here is hoping you rode it out safe and sound! Today’s crossword puzzle theme is all contained in the longest down entries, as four of those multiple-word answers that are “topped” by a word that also can come before the word “chart.” The fifth theme entry, CHART TOPPER, acts as the theme’s reveal (24D: [#1 on the Billboard Hot 100 (and a hint to the puzzle theme in four vertical answers)]).

There was nothing grisly about doing the puzzle, though GRISLIER in the grid is some pretty nice fill (19A: [More horrifying, like a slasher movie sequel]). Did not initially see the clue for SOO when filling it in, but definitely thought it would be a reference to the late Jack Soo, who I loved on Barney Miller (64D: [___ Locks [Great Lakes Passage]). That reference to Soo totally was new to me, but probably not to anyone here who’s in the Great Lakes region. Speaking of older sitcoms, I can’t say that I saw too much of PYLE in syndication, either on Andy Griffith or the spin-off focusing on everyone’s favorite mechanic (60D: [Gomer of classic TV]). I guess the only issue I had was seeing RAGGY, only for the fact that I’m not used to seeing/using that word at all, as opposed to “ragged” (1D: [Tattered]). Totally want to have the next segment dedicated to one of the greatest basketball players of all time, WILT Chamberlain (49D: [Droop]). Instead, another entry caught my attention…

“Sports will make you smarter” moment of the day: ADIA (13A: [Sarah McLachlan hit with the lyric “we are born innocent”]) –  One-time WNBA champion Adia Barnes is currently in her third season as the head coach of the women’s basketball team at her alma mater, the University of Arizona. While a player in Tucson, Barnes was one of the most productive players in the Pac-10,  winning the Pac-10 Player of the Year Award in her senior year in 1997-98. Barnes, who ended her Arizona career as the school’s all-time leading scorer (2,237 points), played over 10 seasons professionally, including being an integral member of the Seattle Storm’s 2004 WNBA championship run.

Thank you so much for the time and attention once again! Have a wonderful day, everyone, and, as always, keep solving!!

Let’s see if we can “Understand?” today’s Tuesday WSJ puzzle: 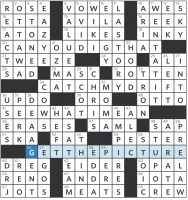 20A: CAN YOU DIG THAT [“Understand, undertaker?”] – I’ve only ever heard this as, “Can you dig it?” It feels like the constructor needed symmetry and modified this phrase to get it to be the correct number of letters.
34A: CATCH MY DRIFT [“Understand, snow plower?”]
41A: SEE WHAT I MEAN [“Understand, statistician?”]
56A: GET THE PICTURE [“Understand, movie mogul?”]

Occupation wordplay! Each of the four themers plays at the occupation being questioned: undertakers DIG, snow plowers work with snow DRIFTs, statisticians work with MEANs, and movie moguls work with PICTUREs. It’s not the most symmetrical set of themers, since undertakers don’t work with DIGs while all the other theme occupations work with their puns, but other than that I enjoyed the theme set.

Random thoughts:
– For [St. Teresa’s home], I plunked in INDIA instead of AVILA. I’d never heard of the correct answer, so now I know! I can see some folks getting caught at the OVID / AVILA crossing.
– I really liked the ATOZ / EAZY E crossing – that’s a fair way of getting solvers to spell EAZY E‘s name correctly without having to guess at the Z vs. S.
– I gave a bit of side eye to SAML [Adams (Declaration of Independence signature)]. Hmmmm.
– I almost Naticked in the south at ANDRE / EDDA / PERT. Does PERT really mean [Sassy]? This really just means I need to start watching “Brooklyn Nine-Nine”!
– More new things to learn: OZMA is a [Princess in Baum books] that I’d never heard about before. According to Wikipedia, she is the rightful ruler of Oz who conveniently appears in all the Oz books except for the most famous one.
– I loved the odd string of vowels in DEA AGENT. When I had _EAA_E__, I was sure something was wrong!
– The chemist in me takes issue with AERATE being defined by [Add fizz to]. Bubbling air though water doesn’t make it fizzy. Bubbling carbon dioxide or nitrogen gas, however, does. 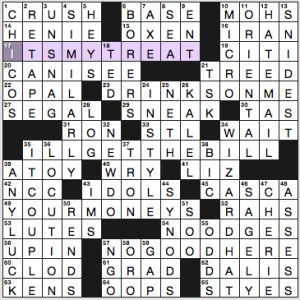 It’s a two-fer-Tuesday! Sam’s got the WSJ and NYT puzzles, both with themes of synonymous phrases. The WSJ theme uses an occupational vibe to differentiate the saying there, whereas the NYT theme is simply [Welcome comment(s) at a bar]. “IT’S MY TREAT!” “DRINKS ON ME,” which feels lacking without “are” in there. “I’LL GET THE BILL,” which feels a bit less like a thing people say. And the two-part “YOUR MONEY’S / NO GOOD HERE.” I’m partial to the first and last lines, and I’m apt to use them at restaurants rather than bars.

Good fill: “ANY LUCK?”, NOODGES, WIZARD HAT, an “IT” COUPLE (I bet there are I.T. departments that have employees who are in a relationship!), IN STYLE, HATE MAIL.

Least savory clue: 21a. [Cornered, as during a fox hunt] for TREED. Why on earth would you want to present a neutral clue about such a brutal (and widely banned) “pastime”? If you think the clue’s fine, please read this page. It’s not as if there aren’t other cluing approaches for TREED. 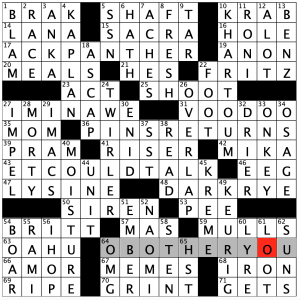 “What did you miss”, as the flavortext to this puzzle asks? In some cases, quite a bit! Each themer is a movie title with between two and ten letters missing (if my counts are correct!):

I have seen only Black Panther of this list, although I have seen a tiny bit of Sorry to Bother You. I think the latter is streaming on HBO. I would like to see the other two, but in due time. Like when they are on Netflix! Yes, I am turning into a cantankerous old man in that I don’t want to go to the movie theater! I will turn 50 this year. Yikes!! A solid 4.5 for this week’s Jonesin’ puzzle. 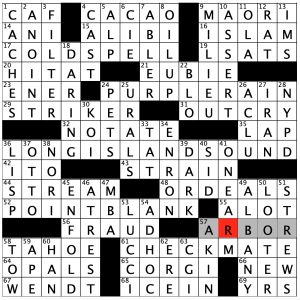 Without the revealer the theme is not readily apparent, and that makes for a great revealer at 61A! I even had to go back and review what was going on, which is this:

So yes, after another look-see, I am in fact familiar with the phrases spell check, rain check, sound check and blank check. Very nice! I haven’t played chess in a while; I always feel like I should take it up when I retire and have time to devote to it. Matt Gaffney, Joon Pahk: any tips for chess beginners? The puzzle was not too hard, either, so a fine Tuesday puzzle. It certainly doesn’t seem to “Tuez!” 4.2 stars.