Posted on January 15, 2019 by Matt Gaffney
crossword about 6 hrs to write
meta 0 minutes 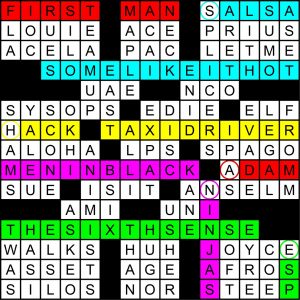 Matt here, doing a quick self-post since Joon is spear-hunting pufferfish in Tahiti this week (not actually true, to my knowledge).

There were five movie titles starred in the grid: FIRST MAN, SOME LIKE IT HOT, TAXI DRIVER, MEN IN BLACK, and THE SIXTH SENSE. Nudged by the title (which is also the title of a great little movie), 394 solvers noticed that those movie titles also serve as crossword-style clues to entries elsewhere in the grid:

Take the first letter of those clued entries in grid order (top-to-bottom) and they spell the contest answer, the classic 1953 Western SHANE.

This entry was posted in Daily Puzzles and tagged contests, Matt Gaffney. Bookmark the permalink.