Our theme is phrases ending in a word that can also roughly mean “news story.” Clues are wackified accordingly. 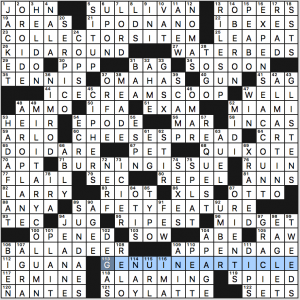 I like the wordplay here. It’s good, if not anything groundbreaking.

And despite the high amount of theme material, there’s some good long fill. I liked SERPICO, WATERBEDS, SULLIVAN, IPOD NANO, KID AROUND, GLISTENS, QUIXOTE, AEROPLANE, SOY LATTE, and “DO I DARE?”

However, there were some things that really bothered me, starting with the title which is what Trump and his blind followers yell out knee-jerkily whenever there’s news that doesn’t fit the narratives they spin.

And MIDGET even though it’s clued [Small racing car class] just doesn’t belong in a grid. I’m willing to bet that can be changed to MIDGES without too much trouble in the SE corner. (Yup, change RAW to RAT or RAP and you have STEEDS or SPEEDS at 99d. Done. Wouldn’t it be nice if it was always that easy to remove an offensive word from your grid?)

And then there’s a good bit of stale fill like AUEL, AH ME, EPODE, PPP, EDO, TEC, and SSTS.

I did like a couple clues: [Bald baby] for EAGLET and [Gatwick banker?] for AEROPLANE, but I found [Sides in a perennial battle] for SEXES to be depressing.

Overall, the negatives weighed on me so I can’t muster up more than 2.5 stars for this puzzle despite the decent theme. 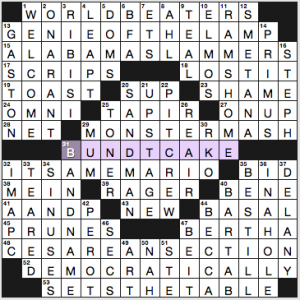 Ha! Look at the grid, and consider the central answer, a BUNDT CAKE or [Confection with a hole in the middle]. Just pour a sugary glaze or sprinkle some powdered sugar all over the puzzle and there you go: a gluten-free dessert.

This puzzle played like a Friday puzzle for me. Surprisingly quick solve, even with the awkward-to-piece-together GENIE OF THE LAMP up top.

The top half felt violent, with WORLD BEATERS, ALABAMA SLAMMERS, and MONSTER MASH not actually being violent and RAMS HOME being violent only when literal. And then GASTON has a literal stabbing in his clue. 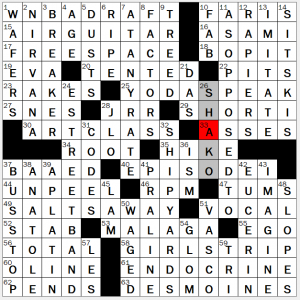 Oh boy! A fun puzzle by a couple of Fiend bloggers! We have a 68-word masterpiece for the LAT puzzle today, and this was tons of fun to solve. I have watched both of these two solving on Twitch, and I predict both will be top 5 solvers in Stamford this coming March. There is a definite liveliness to Erik’s grids in general, and to collaborate with a talent like Andy only enhances the finished product. Again, I don’t see anything in here that wouldn’t be commonly known, and that is not easy to do in a wide open grid. A solid 4.8 stars for this gem. Very well done!

High points in the grid: 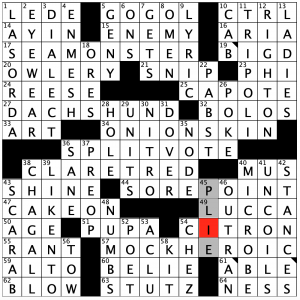 Not too bad this week. I will take 15 minutes for a Brad Wilber Stumper. 72 words in this grid, and nothing over 10 letters. That explains the good fill. A lot of bloggers seem perturbed often at the fill in puzzles. I don’t feel that way. Yes, there are words in here that I either didn’t know, didn’t think I knew, or didn’t remember. But if a puzzle recalls something I knew a long time ago, that is perfectly fine, and if I learn something new, well that is a good thing, isn’t it? I am in the National Puzzlers League, and I think I learn a new word each and every time I solve some of those puzzles. I also realize how hard these are to make, so kudos to the constructors for the fun they provide for all of us, including these difficult Stumpers! 4.6 stars for Brad’s gem today.

It is bitterly cold here in the Midwest. Everyone please be safe in the cold!