The next Inkubator puzzle comes out next week. 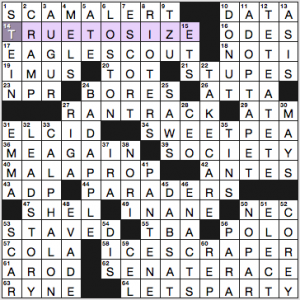 “ME AGAIN.” That is just one of the entries I liked here—others includes TRUE TO SIZE, EAGLE SCOUT, MALAPROP, seasonally appropriate ICE SCRAPER (have needed mine this week), “LET’S PARTY!”, LEAD STORY, CALPHALON pans, PANTENE shampoo, and TAKE CARE.

Did not know: 9d. [Chinese philosopher Meng-___], TZU. Also seen as Mencius, the Wikipedia article tells me. An excerpt: “Mencius emphasized the significance of the common citizens in the state. While Confucianism generally regards rulers highly, he argued that it is acceptable for the subjects to overthrow or even kill a ruler who ignores the people’s needs and rules harshly. This is because a ruler who does not rule justly is no longer a true ruler.”

Not sure how much of a “thing” SCAM ALERT is. Doesn’t feel familiar to me. How about you?

3.8 stars from me. A tad dryer than I like themelesses to feel. 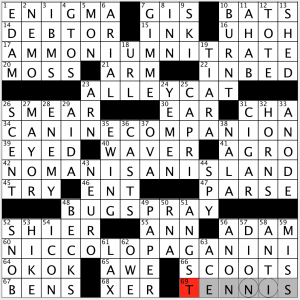 Took me a while to get the theme on this one, but it was quite clever and one of my fave theme-types: take a common word, and re-parse it to make a punny description.

Really lovely construction from Joanne, fitting in four grid-spanning 15s. I also thought this would’ve made a great metapuzzle, measured at maybe 2 metaweeks on the Gaffney Scale, if the revealer were left off — something like, what sport is suggested by this puzzle’s theme entries?

I hope this review has appeased those who say “Ni!” — I haven’t more than one shrubbery to spare. 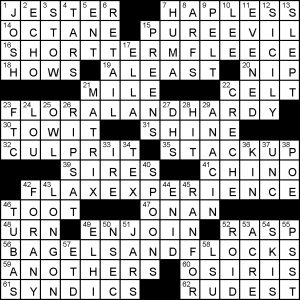 Apologies for the late review.

I really admire these sound addition themes more than the letter ones. They always seem more creative to me. Here, an F sound is added, and the words are changed accordingly. FLORALANDHARDY (LAUREL) and BAGELSANDFLOCKS (LOX) are both winners, and the other two, SHORTTERMFLEECE (LEASE) and FLAXEXPERIENCE (LACKS) are serviceable.

The grid was quite open, but led to a puzzle heavy with “tacked-on” phrases like RIPSAT, LONGON, RANFOR, which always feel jarring. SYNDICS is a new, though inferrable, word for me.