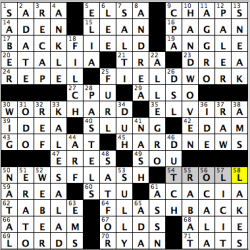 Loved the musical touch to the grid with both SARA (1A: [“I Choose You” singer Bareilles]) and ALLEGRO, with the latter also abutting another music-related clue (22D: [Briskly, to Beethoven]). Then there’s the British lingo crossing of CHAPS (9A: Brighton blokes]) and AGGRO, though I do not use any of those words in my personal lexicon (11D: [Vexation, in British slang]). Seeing the clue to LORDS once again reminded me that I cannot remember all of the 12 items in “The 12 Days of Christmas” off the top of my head for the life of me, especially the ones that come before (six through 12) the five golden rings part (69A: [“Ten _____-a-leaping…”]). At least I remember all of the names of Santa’s reindeer! Can’t say that I listen to a lot of country, but definitely am familiar with ELVIRA, only for the fact that when searching for the “Mistress of the Dark” years back, I came across that song with same title as the movie character (35A: [Hit song by the Oak Ridge Boys]).  As for that music-related entry that abuts ALLEGRO…

“Sports will make you smarter” moment of the day: ANDREA (8D: [“The Prayer” tenor Bocelli ]) –  How did the English soccer team Leicester City Football Club, famous for overcoming 5000-to-1 championship odds at the beginning of the 2015-16 seasons to become champions of the English Premier League, kick off celebrations of that fairytale season? Bring in Andrea Bocelli to sing “Nessun Dorma” to its raucous, mostly liquored-up fans of course!! The manager of the soccer team that season, fellow Italian Claudio Ranieri, is a personal friend of Bocelli, and the singer was invited by Ranieri and the team to perform at the team’s home stadium immediately after the final game of that season. Watching this will either make you giggle as a music lover and/or sports fan, or make you puke as a music purist in hearing the fans in the stands continue to talk/cheer/celebrate during Bocelli’s performance. Either way, enjoy!

Thank you so much for the time, everyone! Again, stay warm! Have a wonderful day and, as always, keep solving!!

This puzzle was berry good! 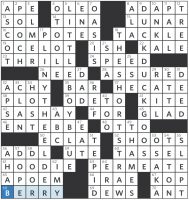 5D: LITTLE BOY BLUE [Neglectful sheep minder of rhyme]
9D: DUCK DUCK GOOSE [Children’s tag game] – I didn’t realize how vicious this game could get until I played it with a group of preteens.
17D: PLINY THE ELDER [“Naturalis Historia” writer killed during the eruption of Vesuvius] – I did not know this! Interesting fact of the day.
18D: THE SHORT STRAW [Picking it makes you a loser] – But a winner in my heart!

68A: BERRY [Word to “hang” from the last word of each long Down answer]

I liked this! The last word of each theme entry can have BERRY added to it, and the result is a delicious fruit cocktail: ELDER/BERRY, BLUE/BERRY, STRAW/BERRY, and GOOSE/BERRY. I liked the variety of berries and appreciated how natural/in-the-language each of the themers was. I also enjoyed the little Easter eggs of fruit-related fill throughout the rest of the puzzle, including COMPOTES and the [Fruit source] TREE. I was kind of sad not to see an entry like CRUNCH/BERRY, but I can see many solvers not enjoying that as much as I would. : ) The themers being downs to simulate hanging berries was also a great touch.

I really enjoyed SASHAY, TINA Fey, THRILL and SPEED in the same row (followed by NEED!), the clue for BAR [Tender spot?], and DOPE. Also loved the shout outs to ETTA James and the Jackson Five! The top half of the grid, in general, was much cleaner and stronger than the bottom half, which included ECLAT ADDL APOEM IRAE KOP IMY all in the bottom third of the puzzle. No ODETO that, I reckon. All in all, a fun puzzle! 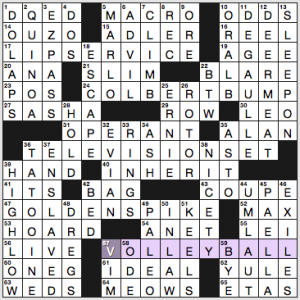 Fair enough. Pretty sure I’ve seen other BUMP/SET/SPIKE themes over the years. 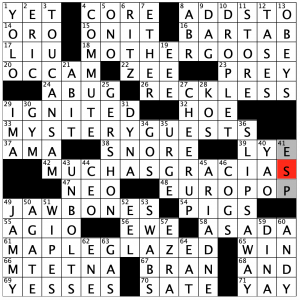 A simple enough theme this week that begs an even simply question: Why the initials MG? I’ll bet there is a story behind the inspiration here. Or, as is sometimes the case, I could be missing something extremely obvious!

Again, if there is a story behind the choice of M.G., I would love to hear it. But maybe it is benign; a theme doesn’t always have to blow your socks off. And this is a Jonesin’ with lots of fun stuff in it, as usual, including some obscurities. A solid 4.4 stars this week. 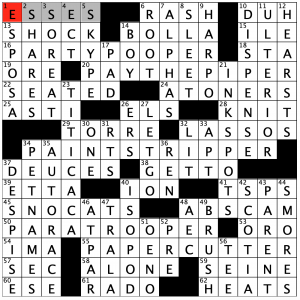 I don’t believe I know who Frank Virzi is (not a pseudonym, I hope!), but that did not affect this Tuesday solve. In light of the recent WSJ announcement saying they would no longer use pseudonyms, perhaps I will assume there will be less use of them going forward?

Nice puzzle, with a somewhat expected “a-ha!” moment revealer at the end (pretend the first four clues here have stars!):

The pattern here is nothing if not uniform; sometimes in a puzzle like this you might see something with the patter PAP@ER instead, but that doesn’t appear to be as easy to use anyway. I couldn’t find anything usable (PAPA BURGER??) that didn’t use the word paper. Nice and clean. Doesn’t seem to “Tuez” at all! A solid 4.3 stars today.

Have a great week. If you’re in the midwest like I am, STAY INDOORS!