Theme: Words starting with the trigram FOR- are split in two and clued as being in favor of the noun that follows. 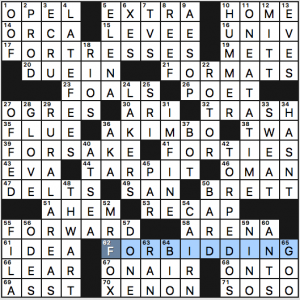 Cute re-parsing theme, even if the repetition of FOR- made most of the entries a lot easier to get.

Lovely fill as usual with the likes of “ONE AT A TIME,” LATE FEES, “I’M FINE,” THWART, HUMMER, AKIMBO, and the symmetrically-paired AESOP and MR. FOX. What do you think of RURAL AREAS? I think I’m okay with it, but it feels a touch “green-painty.” However, I am definitely anti-TORPEDOS. Every online dictionary I looked at spells the word “torpedoes.”

Nice puzzle, unless you are anti-repetition in your theme answers. I give it 3.7 stars. 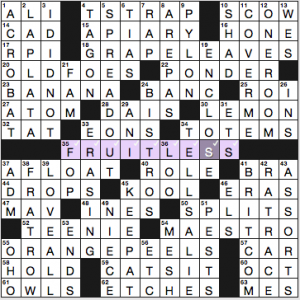 The theme revealer is 35a. [Unproductive … or, literally, a hint to the answers to this puzzle’s starred clues], FRUITLESS. The assorted theme answers consist of a fruit and noun, where the noun also doubles as a verb evoking the meaning “to go away.”

The FRUITLESS revealer doesn’t quite pull everything together for me, but I still like the fresh theme concept.

Speaking of foods, there’s 8d. [South American corn cakes], AREPAS. If you’ve never tried arepas, look for a Venezuelan or Colombian restaurant. I like my arepa filled with chicken, cheese, black beans, and/or sweet plantains. You know why Maduro was elected in Venezuela? Because maduros are sweet plantains. It’s hard not to vote for comfort food.

The grid’s got over a dozen 7-letter answers, plus two 9s. The down side of that is more subpar filler—like OLDFOES BANC TEENIE MES LAPLATA ADM LOVEALL TAGON. 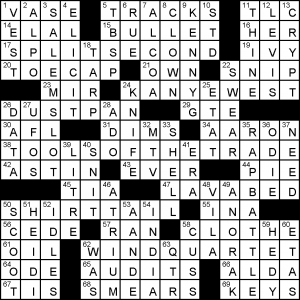 Doug Peterson is a very experienced constructor. He brings an additional level of polish that has felt lacking in several LA Times puzzles of late. The actual theme is pretty basic, nothing unusual. Just WINDQUARTET indicating four words can follow WIND: SECOND WIND, WEST WIND, TRADE WIND and TAIL WIND. The spanning TOOLSOFTHETRADE and KANYEWEST are among the more interesting answers.

What I appreciated was a relative lack of contrived answers (except you AANDE) and needless clumps of obscurity. We even get a shiny pair of downs in SALEMSLOT and RAPBATTLE… 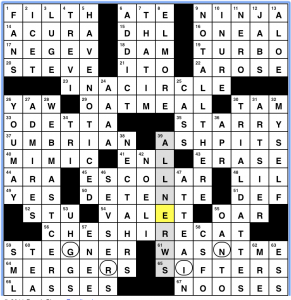 I appreciate what today’s AVCX puzzle (a co-write between Craig Mazin, making his debut, and Jeff Chen) is attempting to do, but it’s perhaps one thing too many.  First off, your eyes aren’t deceiving you, the grid does look like a cat face.  Adding to that, we have the theme clues:

So, as you can see, we have a quote running (symmetrically!) along the downs of the puzzle, CHESHIRE CAT (which, true to its nature, is treated as invisible for the entries crossing it like NECTA[h]RS and ALL-NE[r]WS), PLUS GRIN in the circled squares!  It’s a quote puzzle! It’s a secretly invisible entry puzzle!  It’s a grid that makes a fun shape!  It’s a steak sauce!  I think any combo of these elements is good, but all put together, I think this needed to remove one puzzle accessory before it left the house, particularly since the fill on this, given all its quirks, is so lovely.