The revealer at 71a is LONERS with the clue [Single sorts, and the letters dropped from pairs in the theme answers]. Each theme answer has had a double letter reduced to a single letter, thereby changing the meaning of the name/phrase. 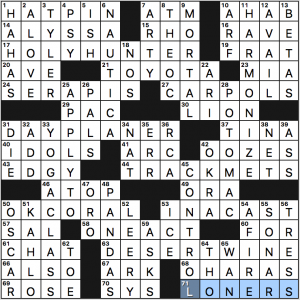 My first instinct was to read the revealer as “lone Rs,” i.e. double-Rs reduced to single Rs. Even though I had already found HOLY HUNTER, I wanted this to be the case. But I quickly dismissed it and decided that the double letters in question were randomly chosen.

As such, I was prepared to write a rather tepid review, but then I read the revealer more closely. That’s when I realized that the dropped letters actually spell out the word LONERS. Aha! That’s a very nice touch that constrains the theme significantly, making the result more impressive.

As for the fill, I’m not a fan of APPLY TO, but the rest is solid to good, especially YOGA CLASS, HARMONIZE, POTOMAC, and brand names TOYOTA and NAUTICA. I didn’t know SERAPIS [British frigate captured by John Paul Jones] and wondered why it wasn’t clued with respect to the garments. Only later did I realize I was thinking of serapes with an E.

Cluing seemed fairly straightforward — nothing to write home about, but nothing too off-the-wall.

The coral entry reminded me of a video I saw the other day about scientists growing coral at a much faster rate than previously in an attempt to save the world’s reefs. Have a look. 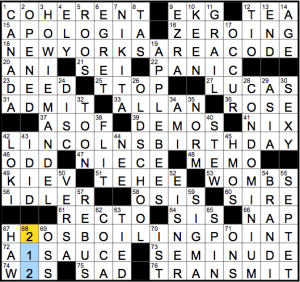 I was so close to solving this puzzle in 2 minutes and 12 seconds! Alas.

That’s only relevant because this puzzle is all about the [Palindromic number] 212, which is our revealer at 68d. Three grid-spanning 16-letter entries can be clued with the number [212]:

It’s worth noting that the word “palindromic” was probably included in the revealer entry because one of the editors felt that the “2” in 72a, W2S [Some I.R.S. forms] wasn’t a fair crossing for the final “2” in 212, and so it needed an extra hint.

I’m shocked Will & co. didn’t save this for February 12th — this feels like a very on-the-nose date-tribute puzzle, especially with the central entry being LINCOLN’S BIRTHDAY. I guess they couldn’t bring themselves to run this challenging of a gimmick on a Tuesday (which is when 2/12/2019 falls) or a Wednesday (2/12/2020), and they didn’t want to wait until the next 2/12 Thursday (2/12/2026).

That said, overall this was not a challenging puzzle. The presence of numbers in the grid is Thursday-ish to be sure, but those are localized to a single corner of the grid, and the rest of the theme is straightforward. I thought the clues were ratcheted up a notch in difficulty to compensate: many clues were challenging through vagueness, like [Exploit] for DEED, [Commercial lead-in to film] for LUCAS, [Expire] for END (could have been DIE), [Development sites] for WOMBS (which in crossword-land is often UTERI), and so on. [Leaves after dinner?] was a fun clue for TEA.

As for the fill, I liked seeing HOWIE MANDEL, CONDOMINIUM, APPLEBEE’S, OLD SCHOOL, and APOLOGIA, and I find the word SEMINUDE delightfully silly. If I never saw ANI clued as a [Tropical black bird] again, it would be too soon, and I never love seeing -OSIS in a grid, but otherwise, I thought the fill was pretty solid, which is to be expected from an 81-word 16×15 grid with few restrictions.

Overall, I’m fairly whelmed. These sure are three things that are represented by the number “212.” The recurrence of the number 212 across multiple disciplines is mildly interesting, though I’d argue 2/12 is materially different from 212. The execution was solid, and I’d argue that an easy Thursday puzzle on occasion is a good thing.

By the by, AZEALIA BANKS SONG is also 16 letters, though “212” it gets its title from the New York area code. By the by, if you want to listen to the song, let me offer a hearty content/language warning. 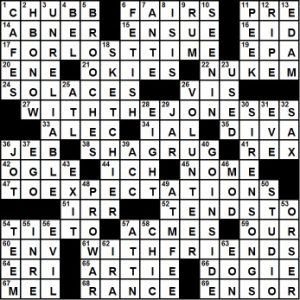 23:10. Jenni’s on the road, so I’ve stepped in to spell her. I’m seeing Paul Coulter everywhere these days, it seems. He had a nice Sunday NYT last month early, an LAT last week, and a Universal earlier this week. I was not disappointed with a time of under half an hour. A speed solver I am not. And I was happy with how this one unfolded for me.

So, you have four instances of vertical words being spelled backwards, and it just so happens that a word is actually spelled in each direction: 11d [Cheat, in a way] PEEK/KEEP
13d [Big cheese?] EDAM/MADE
54d [Brim] TEEM/MEET
56d [Bad to the bone] EVIL/LIVE. Cool, huh? Symmetrically placed also. And this leads to a need to add up to make familiar phrases with the word that is spelled in the upward direction:

17a [After 13-Down, did something quickly after not having done it quickly enough] FOR LOST TIME–So, not exactly 13-Down, you might say, but 13-Up. MADE UP FOR LOST TIME.
27a [After 11-Down, try not to be outdone by your neighbors] WITH THE JONESES–KEEP UP WITH THE JONESES. Interestingly, I’ve seen JONESES in another puzzle within the last week. I’m fairly sure it was not one of Paul’s, though.
47a [After 56-Down, attain imposed standards] TO EXPECTATIONS–LIVE UP TO EXPECTATIONS
61A [After 54-Down, get together for drinks, say] WITH FRIENDS–MEET UP WITH FRIENDS

If there is a meta in here beyond this clever theme, I am not seeing it. You will have to tell me about it in the comments section.

The rest of the fill was nice and crunchy, with excellent, challenging clues, especially for long, non-phrase answers and shorter phrases. For example,

Good stuff, all of the above! And now for a brief educational moment. This very week, a new constructor was asking me about the “allowability” of dupes of short words. I shared with him that in one of my earliest published puzzles, a major editor told me that he was not bothered at all by my having the answers ON TOP and ON REPORT in the same puzzle. It was a total non-issue. Well, that editor was not Peter Gordon, but Peter Gordon was one of the top editors in the biz at that time and still is, of course. So, I was actually glad to see the following two clue-answer combos in succession, so I can point this out to my newbie friend:

But for the practice–in reviews and such–of listing clues and answers together, I don’t think I’d even have noticed this. Again, it’s simply a non-issue. 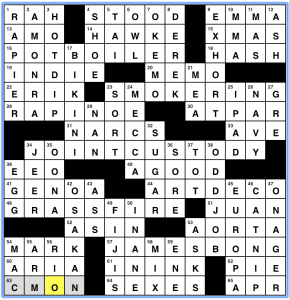 It’s a series of marijuana-related puns about detectives!

In a salute to this puzzle’s theme, please enjoy Tommy Chong (of “Up in Smoke” fame) dressed as a pineapple with abs, singing Cake’s version of “I Will Survive” on The Masked Singer, a program that is the sort of thing that would be a cutaway gag on 30 Rock but is also an absolute delight.

It’s A GOOD grid overall, even with that fill-in-the-blank.  Lots of nice fill – Ethan HAWKE, Megan RAPINOE, ART DECO, BIKINI, ODD JOB, EUROPA, and CATNIP (where I totally misread “Persian intoxicant” and was racking my brain for Iranian liquors) 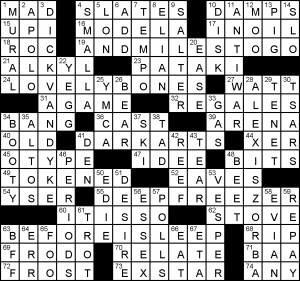 Odd little puzzle, but pleasant in its more eyebrow leanings. I got to this clue, [Poet who used the starts of 24-, 41- and 55-Across to describe the woods], for FROST and assumed the poem was “The Road Not Taken”. Not so. It’s “Stopping by Woods on a Snowy Evening”, though this is not stated explicitly. Rather, three words – LOVELY, DARK and DEEP – and two lines – ANDMILESTOGO/BEFOREISLEEP are quoted from the final stanza. (To get this all to work, the grid is elongated by one.)