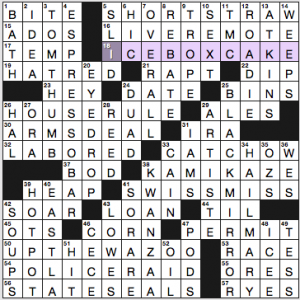 It’s (almost) February! And not a moment too soon, because the polar vortex made the end of January a doozy.

I mucked things up in the top right corner, trying NUDE and HBO instead of SEXT and TMC. Oof! My lack of familiarity with ICEBOX CAKE didn’t help matters.

The title gave me at least part of the theme before I started the puzzle: I was expecting the Notorious RBG and I found her at 60a. The puzzle centers on an RBG quote; I don’t usually like quote puzzle but I will make an exception for this one. It’s a great quote and an unusual puzzle in a 20 x 13 grid. 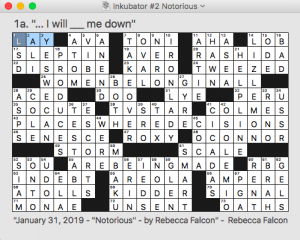 25a is the [Start of a quotation by one of the Justices in this puzzle]. With 43a and 55a, we have WOMEN BELONG IN ALL PLACES WHERE DECISIONS ARE BEING MADE. Amen to that. The other justice appears at 48a: [Supreme Sandra Day] O’CONNOR.

Two puzzles in, and I love this project. It’s not just that all the constructors are women (cis-women, trans-women, and woman-aligned constructors are welcome). The puzzles themselves are full of women’s names, and definitions skew female as well. That is so surprising that it highlights the male-centricity of our usual puzzle fare. And the puzzles so far are well-constructed and fun to solve. Brava and merçi to Tracy and Laura.

Warning: if you are tempted to write a comment saying that this is a) unnecessary b) not worth commenting on c) somehow unfair to men or d) a sign of the impending apocalypse, just – don’t. If you’re a male-identifying person who feels these puzzles are somehow not for you, but you think “regular” puzzles are for “everyone,” you are not even in the same time zone as the point that you have missed.

More about the puzzle!

What I didn’t know before I did this puzzle: that the venom of ASPS was said to have come from Medusa’s blood. 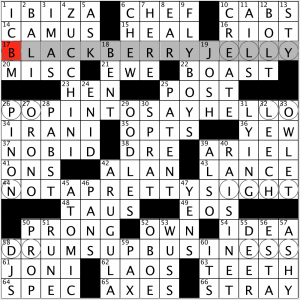 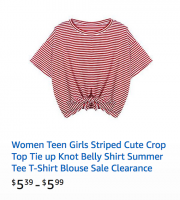 The AVClub crossword team recently did a thing where we made a fake music festival poster using fake band names generated from adjacent entries in our grids from 2018 (if you’re a subscriber, it’ll be appended to your email from this week). Thing is, you can’t unsee those things once you start, and this grid has a few good ones:

ZUCCHINI ATOMIC (their next EP, “BENT ARUGULA,” drops in April)
SPEC AXES (saw them at Bonnaroo a few years ago but I think they’ve sold out since)
ASK ENID (they’re a Letters to Cleo cover band)
STY OWLET (I liked them until they did the song over the credits to the last Avengers movie. Now they’re everywhere.)

[Late breaking edit: There is a Twitter account that is doing this band name thing with NYT grids. Follow it for a daily dose of hilarity.] 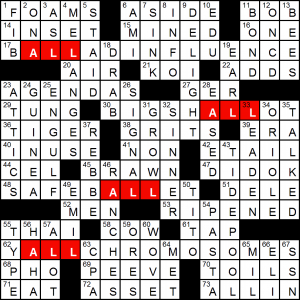 Unlike some letter-addition Fridays of late, this one has a revealer, however basic. ALLIN is interpreted as +ALL. The execution was a little spotty, BIGSHALLOT and SAFEBALLET are at least functional. YALLCHROMOSOMES I think was meant to be the big finale, but personally I find building off letters (Y here) a little cheap. BALLADINFLUENCE’s clue, [Up-tempo music lover’s aversion?], was wanting to point to both BADINFLUENCE and BALLADINFLUENCE; a more minor demerit, but still.

Nice to start 1A with something disgusting sounding… [They may be scraped off in bars] is just FOAM. [South side?] for GRITS is another clever clue, though it was kind of transparent.