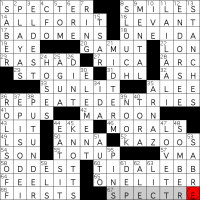 hello and welcome to episode #557 of matt gaffney’s weekly crossword contest, “Spell Cheque”. i attempted this week 1 puzzle without the directions, as i often do. what are the theme answers? there’s one grid-spanning entry across the middle: {A crossword puzzle isn’t allowed to have them} REPEATED ENTRIES. and in the lower right, there are four clues (two across and two down) that appear to be ambiguous:

the square in the very bottom right is circled, so my guess is that we had to supply the correct letter in that square. but there appear to be two valid solutions, ONE LITER/SPECTRE crossing SOMBER/SABRE or ONE LITRE/SPECTER crossing SOMBRE/SABER. how to resolve this ambiguity? the key is the reminder about REPEATED ENTRIES not being allowed, because 1-across/1-down is {Arlen ___ (U.S. senator from Pennsylvania who served from 1981 to 2011)} SPECTER crossing {Spanish for “to know”} SABER (i did not know this spanish word, but the crosses were all unambiguous). to avoid a dupe, we can’t use SPECTER again or SABER again, so we need SPECTRE and SABRE, meaning the lower-right square is an E.

this was pretty fun! i almost laughed out loud when i saw what matt was doing. sure, i didn’t know the spanish verb, but it’s cognate to the french savoir, which i do know. but in any event, i just loved the idea of playing around with these alternate spellings, and using the no-dupe rule to disambiguate it.

that’s all i’ve got. have a great tuesday!