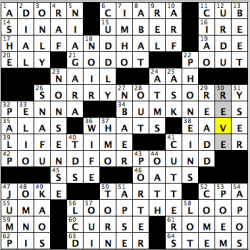 Hello there, everybody! Hope you’re all doing well and recovered from all that you might have consumed at the dinner table during Super Bowl Sunday a couple of days ago. Well, we have a grid in which what’s first is also last: Each of the four theme entries is a three-word phrase or noun in which the first word also happens to be the last word. Love that each of the conjoining words in the four entries are all different, from article to adverb to preposition. Now how come I have “Spy vs. Spy” in my head all of a sudden?!

I could relate to the BUM KNEES fill more than any other in the grid, not only because of its lively fill but because that definitely describes the condition of my knees at this stage (34A: [Lousy joints?]). It wasn’t too, too long ago when I discovered that SNAFU was actually an acronym, but, for many years, I had absolutely no idea of that, as well as the word originating from military slang (26D: [Major mix-up]). And, as of right now, I just discovered the existence of a “Private Snafu,” a cartoon character/series of instructional shorts produced to help train military members of what and what not to do while in service. Oh, and the character was voiced by Mel Blanc and the series was co-written by Dr. Seuss (Theodor Geisel)? How did I not know about this before today?!?!? 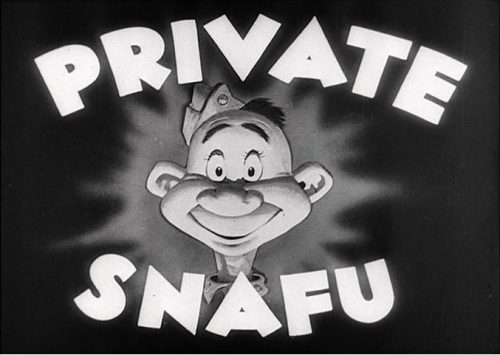 Speaking of the armed forces, there’s also CUTTERS that features in the grid (41D: [Coast Guard vessels]). Yes, there’s some crosswordese that pops up in the grid, but one of those entries, NBA’ER (27D: [Knick or Rocket, briefly), references a franchise in its clue (Houston Rockets) that caused me to make a link to another entry…

“Sports will make you smarter” moment of the day: NIAGARA (5D: [Falls for a married person?]) –  Though Niagara University, located just outside of Niagara Falls in Lewistown, N.Y., is not the first school that comes to mind when thinking of college basketball powers, but it did produce one of the greatest basketball players in the sport’s history, the former San Diego/Houston Rockets great Calvin Murphy. While playing for the Purple Eagles (Niagara’s nickname) between 1967 and 1970, the 5-foot-9 Murphy was a three-time All-America who ended his career as one of the NCAA’s all-time leading scorers, finishing with 2,548 points (33.1 points per game). In the pros, Murphy was best-known for his near-impeccable free throw shooting, including a 1980-81 season in which he set NBA records for most consecutive free throws made (78) and free throw percentage in a season (206-of-215 FT, 95.8%). In 1993, Murphy was inducted into the Naismith Basketball Hall of Fame and, to this day, remains the shortest player inducted.

By the way, how awesome was the clue to Niagara?!?!

Thank you so much for the time and attention, people! Have a wonderful rest of your day and, as always, keep solving!! 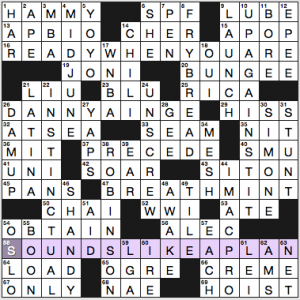 The explanatory part of the theme is 58a. [“Let’s do it!” … or comment on the last words of 16-, 26- and 47-Across, when said together out loud], “SOUNDS LIKE A PLAN.” If you make plans, you make arrangements. Those other three themers are “READY WHEN YOU ARE,” DANNY AINGE, and BREATH MINT. Say ARE-AINGE-MINT out loud and it sorta sounds like “arrangement.” Not your usual Tuesday theme. (Which is a good thing. Too many Tuesday themes drag.)

Let’s see what “Creature Comforts” our constructor has in store for us today! 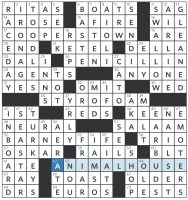 17A: COOPERSTOWN [Where to find Lou Gehrig’s 1939 glove and jersey] – COOP
26A: PENICILLIN [Antibiotic from blue mold] – PEN
36A: STYROFOAM [Cup material] – STY
52A: BARNEY FIFE [Mayberry resident] – BARN
62A: ANIMAL HOUSE [1978 John Belushi movie, and a hint to the first three or four letters of the starred answers]

I generally liked this theme set, though the revealer is a bit awkward ([…first three or four letters…]) since each ANIMAL HOUSE isn’t the same number of letters long. Even still, I can’t think of many more ubiquitous members of the set, so it feels relatively tight to me, which I like.

Other random thoughts:
– I was glad to see the puzzle start off with some strong female representation in RITAS [Hayworth and Moreno], and DELLA Reese.
– But…. [Tom, Dick or Harry] does not refer to ANYONE. A set of three male names, in this day and age, no longer extrapolates to ANYONE.
– A lot of this puzzle felt dated, with entries that haven’t been relevant in 15+ years: BARNEY FIFE, WIL Shriner(?), bridge expert(?!) ELY Culbertson, McCarthy’s REDS quarry, TRW, and MOD. ANIMAL HOUSE, as popular as it still is, also feels like a dated reference (and I went to Dartmouth, where it was set!).
– Side eye to YRLY and NOU. Also, wouldn’t a [Carpenter’s punch] be an awl, not a NAIL SET? That clue seemed off for me and stymied me for a bit in that SE corner.
– TIL: It’s called an INBOARD motor, not an onboard motor. I’ve had that wrong! 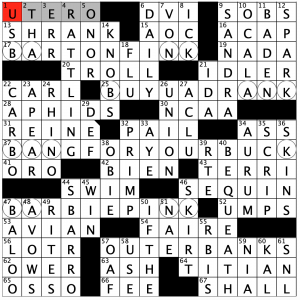 Speaking of “shore”, I am hoping to be on a sandy one in about three weeks. Vacation is almost here! Some sun therapy will feel good, I am sure. Anyway, there is a puzzle here!

So our themers are all wrapped in the letters in BANK, hence “Outer Banks.” I have never been to the Outer Banks, but I hear it is quite nice. Al Roker is usually there when a hurricane is bearing down. Perhaps a future retirement destination … ? I will surely have to scout it out someday! Yes, T-Pain does spell his song with a DRANK on the end. Say what you want about rappers; he appears to actually have some musical talent. Do a YouTube dive and you will see what I am talking about. My timer didn’t work again; maybe 5 minutes or so? Nice puzzle, Matt! 4.3 stars. 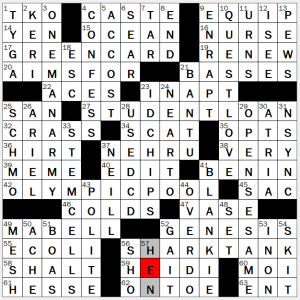 A new constructor perhaps? I don’t know Tyler, but I do know Jeff, and he is one of a few constructors that focuses on developing new gridsetters. If this is your first puzzle, Tyler, congratulations! If it isn’t, where are some of  your other ones, because this one is pretty good! The theme has a revealer at 56-Across:

I like Shark Tank, but I don’t watch it that often. It is not exactly appointment television for me, but when it is on it can be entertaining. Maybe I just don’t like rich people talk about how they want to throw their millions around that much! All in all, though, a fine theme. Here’s to more puzzles, Tyler! (Jeff, I know you’ll have many more!)

That is all for now. Enjoy your day!

Yesterday, Jim Q. welcomed you to Team Fiend’s first Universal Crossword write-up, noting that we are in the David Steinberg Era. Welcome now to the second such write-up.

THEME:  In this 72-answer grid—with only four three-letter answers!—Christopher gives us a trio of phrases with a common homophone. 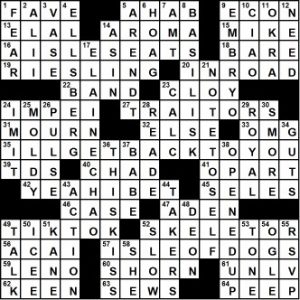 Plus a lot of other good stuff:

Sara Keller did this theme in a 2003 NYT, with three different phrases. So what? A solid homophone theme is bound to get repeated once per decade or two.