As I wrote a few days ago, Paul Coulter is everywhere these days!

THEME:  In this 76-answer grid—with eleven three-letter answers—Paul gives us a quartet with a little mystery to be solved: 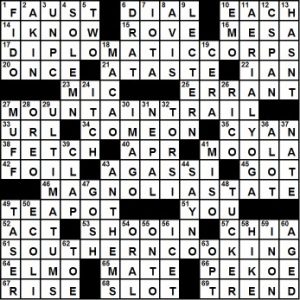 I’m pulling no punches here, folks. From the above I’ve come away with DC, MT, MS, and SC. Which I recognize to be the USPS abbreviations for District of Columbia, Montana, Mississippi, and South Carolina.

I’m going to write a little more in this review and hope for an aha-moment.

As one might expect from his recent body of excellent work, Paul has provided some other stellar stuff in this puzzle:

Nicely done. As for that aha moment–well, here’s what I’ve got:

The U.S. diplomatic corps is headquartered in the District of Columbia. Montana, having a lot of mountains, has a lot of mountain trails to go along with them. Mississippi being the Magnolia State, the MS for it is apt. And South Carolina is known for its Southern cooking (especially Charleston). What do you guys think?

Thanks to Vic for stepping in while I was away last week!

What do these answers have in common? 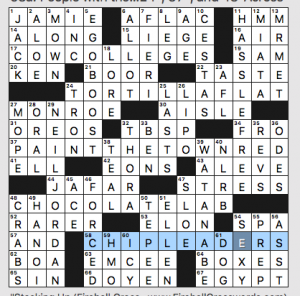 I whipped through the puzzle without paying any attention to the theme, so I had no idea what was going on until I got 58a [People with the most money in poker tournaments…or a hint to 17-,240, 37-, and 48-Across]: CHIP LEADERS. COW CHIP, TORTILLA CHIP, PAINT CHIP, CHOCOLATE CHIP. That’s the theme. It’s fine, as I said; everything works and the four base phrases are solidly in the language. I’ve never heard CHIP LEADERS before and will defer to the commentariat to tell me if that’s really a thing people say. It’s nothing to strain the brain. 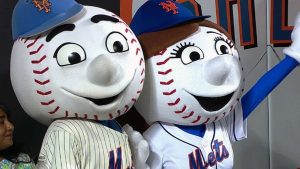 What I didn’t know before I did this puzzle: that KEN WATANABE lost to Tim Robbins for Best Supporting Actor in 2003. I looked it up to figure out which films they were in and found that Robbins won for “Mystic River,” Watanabe was nominated for “The Last Samurai,” and it was actually the 2004 Oscars. The films were released in 2003; does that make Robbins the 2003 Best Supporting Actor, as the clue says, or the 2004 Supporting Actor? 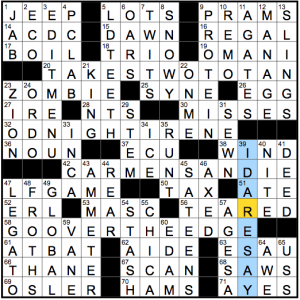 An appropriately difficult theme for Thursday, and the execution was okay (barring the weirdness of “IT”-less TAKES TWO TO TAN[GO]). I don’t have too terribly much to say about this one: I liked it just fine! I will say that when a puzzle has nonsense entries due to the theme, I want the fill to be absolutely squeaky clean, and this fill was not: ORDO, NTS, ECU, ERL, OSLER were all unusually rough.

Until next time, goodnight Irenes and non-Irenes alike!

The letter E is moved around in the theme entries due to E-MIGRATION (62a, [Exodus, or a literal feature of this puzzle’s starred answers]). 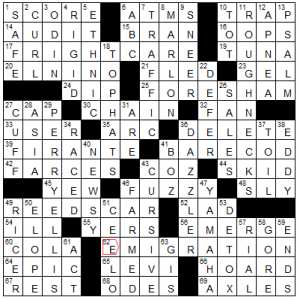 A fairly standard, but enjoyable letter-moving theme. However, my problem mostly had to do with the BARE COD clue. I read “in the raw” as meaning “uncooked” which I don’t think is too much of a stretch. Google tells me it can mean “naked” (with regards to humans), but we’re talking about fish, which is sometimes eaten raw. And since I had _ARE COD, it sure looked like it wanted RARE COD which didn’t make much sense to me as far as the theme went, but it seemed to fit the clue. It didn’t help that the crossing 41d BOZ [Dickens pseudonym] meant absolutely nothing to me (and me an English major!) and further, that in my experience “cousin” is always shortened to “cuz” not COZ (43a, [Ma’s bro’s kid]). So I ended up with RUZ at 41d to go along with RARE COD. A clue which clearly meant “unclothed” would’ve been better, in my opinion, as would one referring to the slightly more modern BOZ Scaggs. As it is, I think that little thorny section is just over the foul line. 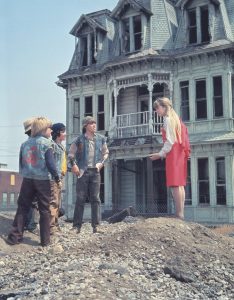 Scene from “Return from Witch Mountain.” That’s DAZZLER in the middle.

I can’t see that last word without thinking of Disney’s 1978 sci-fi film “Return from Witch Mountain.”  I watched it some years ago with my kids because I enjoyed it when I was a kid. Obviously it was very dated and we had fun making fun of it, especially when one of the heroes meets up with a gang of street toughs (other dopey-looking kids) who seek to intimidate her. Can’t find a video, but here’s the actual dialog: “I’m Rocky.” “I’m Muscles.” “I’m Crusher.” Pause for dramatic effect as we meet the leader of the gang… “And I’m DAZZLER.” I want to say this line was even delivered with jazz hands, but I could be wrong about that. It certainly was delivered in all seriousness, and no one blinked an eye at it. Since then it became in inside joke between my kids and me.

Wrapping up, YMMV but I had a couple sticking points that I feel could have been remedied with some adjusted cluing. But aside from that, this is an enjoyable grid with good wordplay. 3.7 stars. 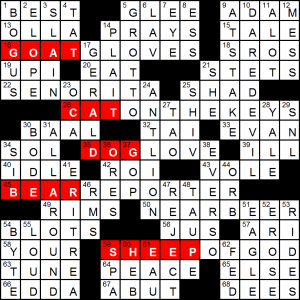 The theme concept is simple. Five (at least somewhat) figurative phrases that have young animals have those replaced with the adult equivalent: KID becomes GOAT; KITTEN to CAT; PUPPY to DOG; CUB to BEAR; and LAMB to SHEEP. I disliked the oxymoronic clues in the 3rd and 4th answers. I guess it was for consistency, but simply [Mature journalist?] or similar and [Mature infatuation?] would have been less clunky. The most difficult of the theme answers would be KITTENONTHEKEYS, an early 1920’s composition by Zez Confrey (or is it Comfrey? Google sez Con-.)

Particularly for a simple puzzle such as this, there is a lot of vintage crossword-ese. You’d preferably only want maybe one or two of: OLLA, EDDA, EROSE and OCA. All of those on one day and your crossword has a musty feel. The BOGUS duo of SROS/STETS also makes for another rather weak corner… 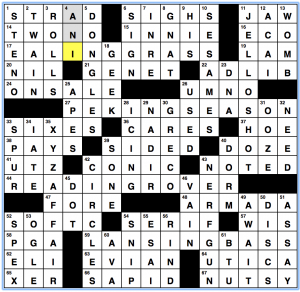 After doing yesterday’s AVCX puzzle, I wondered if “Go-ing Places” would inadvertently have the same gimmick, with GO inserted into some places.  That wasn’t the case – let’s figure out what is going on here.

I got so focused on “GO” that I didn’t think about ING!  adding ING to some more standard phrases (EEL GRASS, PEAK SEASON, RED ROVER, LANCE BASS) changes phonetically to become the name of a city – EALING, PEKING, READING, and LANSING

AVA Max! I found out about this song through the music blog Stereogum, and it’s made its way onto my regular rotation playlist because it’s kind of a bop.