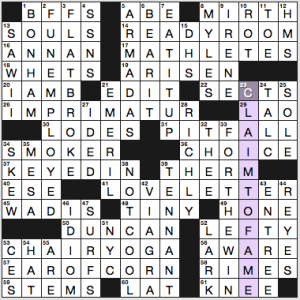 This puzzle, it’s too easy for a Friday! I’m not getting my money’s worth here. Even with a 9-letter answer I’d never heard of (14a. [Military pilot’s waiting area], READY ROOM), I plowed right through.

Likes: MATHLETES, IMPRIMATUR, LOVE LETTER, CHAIR YOGA, John BONHAM, FUNEMPLOYED and its less whimsical counterpart FLAT BROKE, David TENNANT, slangy FOR THE WIN (if you thought the online shorthand ftw meant “fuck the world” or “fuck the what,” you were as wrong as I once was), IRENE Joliot-Curie, “NOT COOL,” and CLAIM TO FAME. 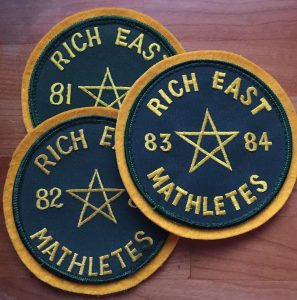 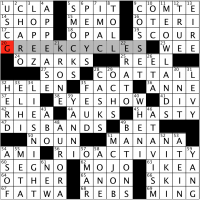 If you don’t like ADs in your crosswords, today is your lucky day! Five themers go AD-free, resulting in wacky phrases:

A cute idea; LIES NIGHT feels like the weakest of the set, but it doesn’t detract from it. I don’t see constructor Joy Andrews in our tag library, so I’ll assume this is a debut! If so, congrats, Joy, and I hope to see more of your puzzles in the future!

THEME: The word “water” can follow either parts of the theme answers

Straightforward theme, though in my haste I didn’t read the entire clue for the revealer (tsk! tsk!). I didn’t see what was going on until I had completed the grid.

FIRE WATER is a new term for me- according to Google it’s a type of liquor or moonshine. Makes sense! 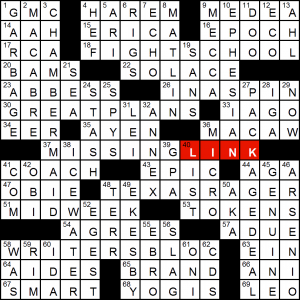 Letter deletion rather than addition is the focus of today’s puzzle theme. Without the key phrase, MISSINGLINK, the deletions are puzzling to say the least. Four phrases are missing L-I-N-K in turn, creating nonce phrases: F(L)IGHTSCHOOL, GREATPLA(I)NS, TEXASRA(N)GER and WRITERSBLOC(K). The phrases themselves, given the almost limitless options, were a little dry, and I am not sure I have ever encountered RAGER as a term before. It sounds like 1940’s slang of some sort.

Although clues in general are more muted in the LA Times, as the week progresses we hope for some more meaty offerings. Today there wasn’t anything that stands out. There were some interesting entries, mostly single words like MACABRE (not respelt like most American words?), GENUINE, EPHESIAN and PACKAGEDEAL, but it was in general a more staid offering.