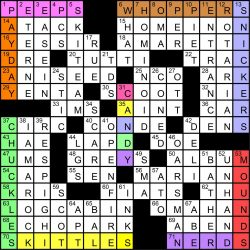 Hello there, everyone! This Thursday is Valentine’s Day, and today’s puzzle is a cleverly disguised “box” of CANDY, where the names of different brands of candies line the edges of the grid (31D: [Box of _____ (Valentine’s Day gift suggested by the answers of this puzzle’s edges)]). Let’s take a trip around the candied trail, shall we?!

Everything was smooth sailing in terms of the solve until I ran into the clue for RESPIGHI, which, along with a couple of its crossings, made the southwest corner a complete spider’s web since I was not immediately familiar with the name of the Italian composer (39D: [“Pines of Rome” composer]). Running through the alphabet finally made something appear that looked recognizable and that I was comfortable with putting in. I can totally see some beginning solvers having a devil of a time successfully navigating that entry, especially when it crosses HAE (43A: [Own, in Dundee]) and ECHO PARK, an entry I knew only because I’ve been to Dodger Stadium before and remembered that an Echo Park section of the city was adjacent to the stadium (68A: [2006 Michael Connolly novel that’s also the name of a Los Angeles neighborhood]). Yes, that is another case of sports, at least indirectly, bailing me out of a spot of bother.

There were a few sweets that did not make the cut as part of the theme but still featured in the grid, like AMARETTI (18A: [Italian almond cookies]) and TUTTI (20A: [___-Frutti]). Loved the fill of both LOG CABIN (63A: [Humble birthplace of 67-Down]), in reference to ABE (67D: [Honest “prez”]), and OPEN FIRE, and even better that those two entries intersected (41D: [Chestnut-roasting place in a popular yule tune]). Definitely would not mind standing next to an open fire at the moment since temps here are still hovering around freezing out East.

“Sports will make you smarter” moment of the day: MARIANO (56A: [Yankee Rivera, the first player to be unanimously elected to the Baseball Hall of Fame]) –  First off, the entry of a pitcher crossing MOUNDS was excellent. Second, I know enough sports fans might have bristled at the fact that Rivera was the first unanimous election into Cooperstown, only for the fact that many other greats of the game who probably should have been voted in unanimously (e.g. Ruth, Gehrig, Aaron, Mays, Griffey Jr., etc.) were not. But that shouldn’t/doesn’t take away from the man who finished his career with a record 652 saves and, officially, was the last person to wear No. 42, given that Major League Baseball had retired that number in perpetuity in 1997 to honor Jackie Robinson’s 50th anniversary of breaking the color barrier in Major League Baseball. With his election, Rivera is now the second Panamanian to become a member of the Baseball Hall of Fame. Do you know the first? (Hint: His last name is fairly popular in crosswords. Answer at the end of this blog.)

Thank you so much for the time, everybody Have a wonderful rest of your day and, as always, keep solving!!

Let’s see what it is about today’s puzzle is “Legally Binding” (aside from the fact that we probably agreed to some kind of arbitration clause just by clicking through to the puzzle on the WSJ’s website!). 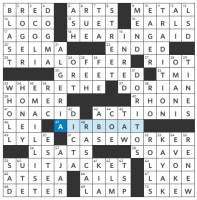 18A: HEARING AID [*Audio amplifier, of a sort]
23A: TRIAL OFFER [*Telemarketer’s come-on] – Doesn’t “come-on” largely have a pick up line at a bar connotation these days?
51A: CASE WORKER [*Social services department staffer]
59A: SUIT JACKET [*Garment that might display a pocket square]
33A/43A: WHERE THE ACTION IS [With 43-Across, an exciting place, and a hint to the starts of the starred answers]

I … don’t get it? Certainly, a HEARING, TRIAL, CASE, or SUIT can be carried out in court, but I don’t get the connection to the revealer. I feel like I’m being super dense. Is the theme just that you can take an action in court and these are four actions you can take in court? I’m not a legal-minded person, so maybe taking an action in court is more of an official term? Otherwise, it seems a bit arbitrary.

Also, WHERE THE ACTION IS implies a courtroom. So, if the revealer is hinting to that location, shouldn’t the themers be synonyms of courtroom (to line up with WHERE THE), not synonyms of the actions taken in the courtroom? Something is incongruous about this theme to me. Help me out in the comments, please, if I’m missing something obvious.

Other random thoughts:
– I’m glad to see SELMA get a mention as the [Site of a 1965 voter registration drive]. What an important time and place in history!
– How was a connection not made in the cluing between LSD and ON ACID? I did appreciate the [Bayou craft] AIR BOAT + [River craft] KAYAK nods to each other.
– I was pleased that ROGER and HOMER were both clued not with respect to men, but to other uses of the words! However, is the only woman in the grid really an unnamed [“The woman ___” (Gene Wilder film)] IN RED from the man-trying-oh-so-hard-to-commit-adultery movie? Oh wait, there’s ESTEE Lauder, always there to save the day.
– Who says FEH? SOAVE? DICTA? COE? TAW? FEH, indeed. 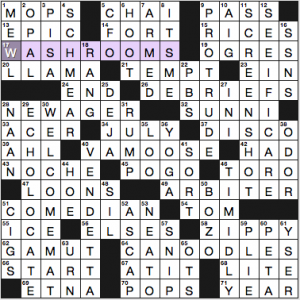 Great theme! Assorted words (and one phrase) are parsed as if they’re a 2-letter state abbreviation + another word.

Fun angle to take, no? The shortness of the themers left room for long Downs, which did not trouble me since none of those Downs had clues resembling the theme clues. (It can be discombobulating to piece a theme together when there are long answers that look like themers.)

Four stars from me, despite that YSER business. 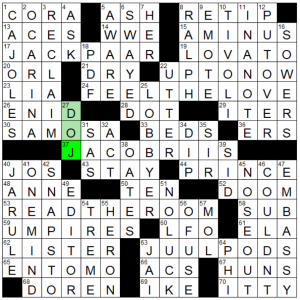 Is it time for a Jonesin’ puzzle already? These days are flying by. I must be getting old! I can never get a timer to work with these. I was using Xword on my new Surface Laptop 2 I got for work, and the timer wasn’t set up. 6 minutes maybe, if I had to guess? We have double vowels in our theme answers, one for each vowel, and in order!

Neatly done. And 63A is timely, as they are trying to slow down the rise in teen vaping. Here in Indiana, there are TONS of smokers. I simply don’t understand it. For some reason, people think it makes them look cool. I will stop talking before I offend someone. Great puzzle, Matt! 4.4 stars this week.

See you for next week’s Jonesin’! 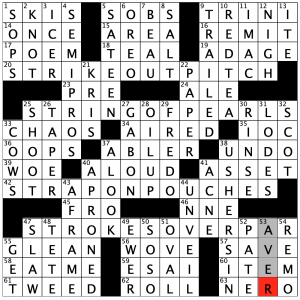 This one took a shade longer than it should have. I need a vacation. Why isn’t 1D some sort of revealer? Am I missing something?

So, since each of these themers has the initials SOP, you would think that, in prime LAT fashion, there would be a revealer. I am thinking that 1D is not a mistake, but a more clever clue would have possibly tied this puzzle up in a slightly neater bow. Something like [… and a hint to what is happening in this puzzle?] would have been nice. Or maybe I am just getting used to theme revealers! Still a fine puzzle, which, as stated, I found a tad tougher than a normal Tuesday. But again, I need a vacation. 4.3 stars.

There is freezing rain here in northern IN this Tuesday morning. What fun! 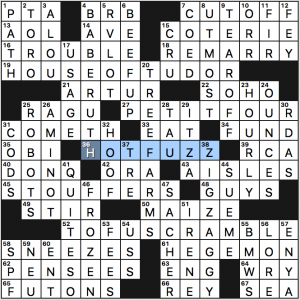 Theme: Similar to one we had last week, this is an anagram theme with TOFU “scrambled” at the junctures of words in three answers and in the middle of three others, with the obligatory-reveal:|

Andrew gives us lots of other crunchy items in this 74-answer grid:

And then there was this that I’d not seen before; nor had Ginsberg: