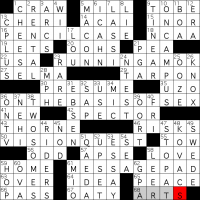 hello and welcome to episode #558 of matt gaffney’s weekly crossword contest, “Last in Translation”. i don’t remember the last time i fell flat on my face on a week 2 puzzle, but here we are: i have no idea what the theme is or how the meta works. so there’s that. the instructions tell us we’re looking for a food that’s four letters long in English. what are the theme answers? well, there appear to be five long across answers:

so, what’s the theme? i have nothing, but it’s not quite noon yet, so let’s see if we can figure it out together. the title certainly suggests looking at the ends of these theme answers and also foreign languages. so maybe CASE is hinting at the old crosswordese standby ETUI, a french word for case. but this idea doesn’t seem to extend to the other theme answers. AMOK is an interesting word in its own right, derived from malay via portuguese, but that doesn’t seem to be the theme. while we’re here, though, i noticed that PAD could be followed by the name of a language (THAI) to get a food, which would seem to relate to both title and instructions, but this doesn’t go anywhere either.

perhaps there is a non-foreign-language-related way to “translate” these final words (CASE, AMOK, SEX, QUEST, PAD). i thought perhaps change a letter (you can get GUEST from QUEST, for example)… but there’s nothing you can do with AMOK.

okay, here’s something. if you change the last letter of PENCIL to R, then you can get the word CIRCA in PENCIRCASE. changing the G of RUNNING AMOK to a J gives NINJA. that’s interesting, right? CIRCA (from latin) and NINJA (from japanese) are both common english loanwords. unfortunately, the pattern stops there.

how about going at it from the other direction? the instructions say we’re looking for a 4-letter answer, but i have what appear to be five theme entries. this suggests that either the central one is acting as a reveal answer of some sort, or perhaps that we’re going to extract a five-letter word in some other language that refers to a food that’s only four letters in english. right now i’m leaning towards the latter, because if ON THE BASIS OF SEX is some kind of instruction, i don’t know how to follow it.

so let’s just try to think of foods that are four letters in english, but in another language, known by a 5-letter word that’s sufficiently commonly known to americans that it might be used as a clue. TOFU, for example, fits the first requirement but not the second; i think we’re going to need a european language because we’re going to extract one letter (in our usual roman alphabet) from each theme answer. what about ARROZ -> RICE? that would suggest doing something in spanish. oh hey. hey! i just solved it.

changing the last letter of each theme answer can produce a common (at least by crossword standards) spanish word. as an elegant confirmation step, the english translation of each one is found elsewhere in the grid:

taking the new last letters indeed spells out ARROZ, so RICE is the correct answer.

whew, that was hard. it definitely felt like a week 4 to me; i could not make any headway in the forward direction, and had to resort to guess-and-backsolve from the instructions. on the other hand, my very second instinct ended up being correct, and i just didn’t think about spanish words. for this to be week 2 difficulty, i think “spanish” should probably have been in the instructions or title.

having said that, this is a very cool meta, and i’m not going to complain about a month with two hard-enough-to-be-week-4 metas! i like the hard ones.

well, it was a close call, but i’ve extended my streak of not being stumped on a week 2. how about you?