Aptly tricky Valentinesy theme today which stymied me until I found the revealer at the bottom: 68a [Valentine’s Day gift, and what happened six times in this puzzle], RED ROSE. In six theme answers, the letters RED rise up from the main entry. You have to return to the main entry to get the rest of it.

I enjoyed this nicely-executed theme. I love when nothing seems to be working and then, with just the right nudge, it all falls into place. With quite a few long Across answers, it wasn’t always easy to see which were the theme answers, but once I got the revealer, I was much quicker at spotting the REDs and working out the theme entries. 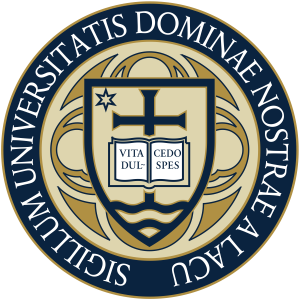 That SE corner is a bit clunky in the Down direction with ON CD, D’OR, plural ANNAS, and British METRE, but that’s to be expected when it’s dominated by two big theme answers. I’d say it’s not bad, considering.

On the whole, a fun, tricky theme. A dozen red roses is the ultimate Valentine’s Day gift, but I’ll settle for half a dozen here.

I wouldn’t say there was a lot of fun fill; this is what happens when there are so many constraints on the grid. But everything was fair. Some of it was tough: BEADING [Moccasin adornment], GLEESOME [Joyous, quaintly], and HERBAGE [Vegetation for grazing]. And some of it was interesting: ARGYLE, DOMINO, GUERRERO, ESCOBAR.

Have you ever had this happen? You put in a word somewhere only to erase it, but then you find a place for that same word elsewhere in the grid? I have, numerous times. But I don’t think I’ve ever had it happen twice to the same word in the same grid. I had DOG at 11a [Monopoly token choice] then moved it to 32a [Lab in one’s home, e.g.] until it finally landed at 22d [Feet, informally] in plural form.

And that’s all from me. A fun, Thursday-worthy Valentine’s treat. 4.2 stars from me. 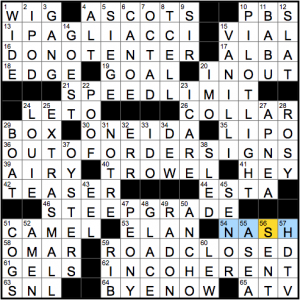 Today’s revealer is 36a, OUT OF ORDER SIGNS [Some bathroom postings … or what the clues to 16-, 21-, 46- and 59-Across are?]. The clues to those four entries are simply anagrams of street signs (their letters are out of order!). Like so:

The revealer is cute, but I wanted the anagrams to either be wackier or more road-related. As it stands, I had a fairly ho-hum solving experience. 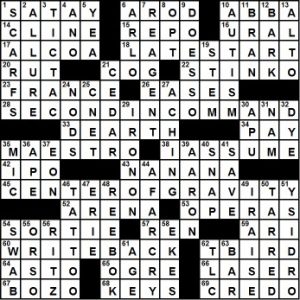 Okay, we’ve got ourselves a Valentine’s Day theme signaled by the title. Now, if I can figure it out. Or, better yet, facilitate your figuring it out.

Nicely done, Debbie, though we did see something quite similar recently in another venue, no? And the title is a tad bit of a giveaway, but … we’ll blame that on David. That, in no way, detracts from your accomplishment here. After all, what the world needs is more people who can correctly spell love.

Debbie’s Downers include some nifty work as well:

Happy Valentine’s Day! Sorry for the delay in posting this writeup. I solved the puzzle last evening and then….life happened.

I also forgot to turn on the timer. This wasn’t particularly difficult despite some unfamiliar entries. Let’s see what we’ve got. 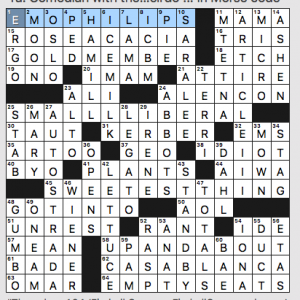 What I didn’t know before I did this puzzle: 25a [Progressive Canadian who isn’t a Grit]. According to The Canadian Encyclopedia, a “Grit” is a member of the Liberal Party. This apparently dates from a 19th-century slogan for the Upper Canada Reform Party, whose adherents were characterized as “all sand and no dirt, clear grit all the way through.” A Progressive who is not a Grit is a SMALL-L LIBERAL. I suspect this was the seed entry for this puzzle. The string of 4 Ls in the middle looked really odd when I started to fill it in, and I enjoyed the aha! moment. 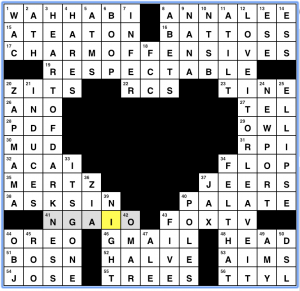 It’s a themeless from BEQ today! 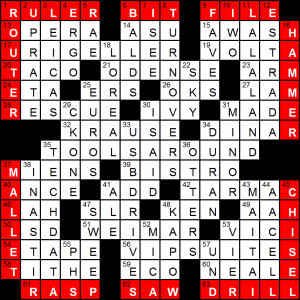 Today’s theme features an unusual arrangement, though one still seen from time to time. TOOLSAROUND is interpreted literally, and the answers on the edge of the grid are all tools not clued as such. Most of the tools used have sufficient alternative meanings, though MALLET and HAMMER didn’t really differ too greatly, as there aren’t clearly alternative meanings. I also learnt today that there is a tool called a ROUTER: “a power tool with a shaped cutter, used in carpentry for making grooves for joints, decorative mouldings, etc.” I am not tool inclined.

The problem with these puzzles is usually that there is considerable strain in the corners. With two theme answers constraining fill considerably, things inevitably get out of control.