Whew! This was rough for me, mostly because of that NE corner. I was not on the constructor’s wavelength, but I got there in the end.

The theme takes famous people’s full names where the last name starts with an S. That S is joined to the first name to create a possessive and the remainder of the last name is re-imagined as its homophone. Easier to see in action. 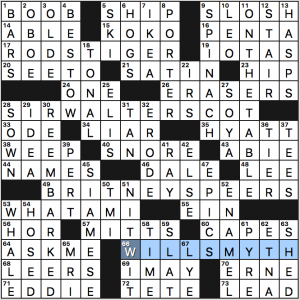 I enjoyed this theme quite a bit despite my difficulties. (I think my problems stemmed from cluing of the surrounding fill.) I love how consistent it is in that each ending word has its spelling changed to match the homophone.

So, yeah, that NE corner. Some of it was trivia I didn’t know ([Lord high executioner of Titipu] for KOKO, (from The Mikado) and [Oysters Rockefeller ingredient] for SPINACH), some of it was ambiguous cluing ([Chain with a blue and yellow logo] for IKEA, [Station worker] for PORTER, and [Brit’s protein source] for SOYA), some of it was my own stupidity (thinking that [Half of deca-] was going to be SEPTA or HEPTA before realizing it was PENTA), and one was…well, I don’t know what it was ([Padlock holder], a singular clue, asking for HASPS). Why the clue is singular I don’t know. If you do, let us know.

Elsewhere, many of the clues felt like they skewed toward the OLDE crowd:

I’m not complaining, but it was noticeable. There were some newer references as well like to The Incredibles (“No CAPES!”) and…well, two of the theme answers of course.

Despite having difficulties with many of the clues, I enjoyed this grid with its entertaining theme and some good fill. 3.7 stars. 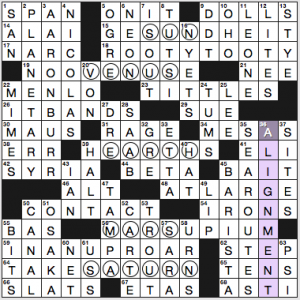 The theme is PLANETARY / ALIGNMENT, and five Across answers contain things in the solar system in the circled squares, roughly in alignment. SUN in GESUNDHEIT (do we include the sun in planetary alignment, when it’s a star?), VENUS in the iffy phrase NO OVEN USE (is that familiar enough to be a crossword entry? color me skeptical), EARTH in HEARTHS, MARS in MARSUPIUM (!), and SATURN in TAKES A TURN. I leave it to the more astronomically minded to explain whether these five bodies have aligned in the sky in notable fashion. I Googled a little, but I was seeing mention of Jupiter. No idea if this theme is astronomically sound or just riffing on the concept of planetary alignment. But still, the SUN is not a planet! That rankles. 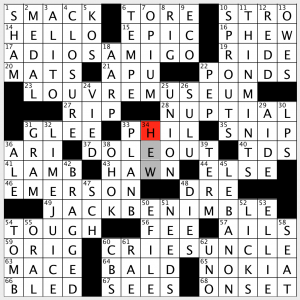 These are all great finds as both the base answers and the embedded uncles are very familiar. I suppose (my favorite of the bunch) Uncle LEO may have non-Seinfeld fans scratching their heads, but in my book he belongs in the canon of famous uncles!

Clean all around with LIME JUICE and THIN MINTS adding some zest to the puzzle, and a fun clue for the revealer.

One of those puzzles that I didn’t see the theme until after it was completed, but still enjoyable from start to finish. 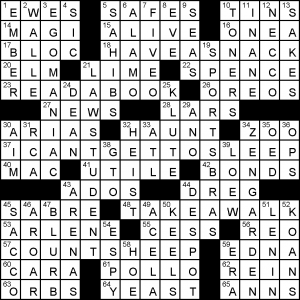 The puzzle’s title is the central [Insomniac’s lament], ICANTGETTOSLEEP. I only recall having heard READABOOK and COUNTSHEEP as stereotypical advice. Maybe someone somewhere suggests HAVEASNACK / TAKEAWALK? The second layer of the theme is to tie them to specific vocations: cook, librarian and trainer felt apt, though I’d have gone with shepherd not auditor for COUNTSHEEP.

The other is the scrabbly [Meditation setting with rocks and gravel], ZENGARDEN with EGOMANIAC a more prosaic entry.
[Like Times Square on New Year’s Eve], AROAR. Today’s “vocabulary not accepted in Spelling Bee.”

I better quit now because I’m about to be loadshed. The thrill. 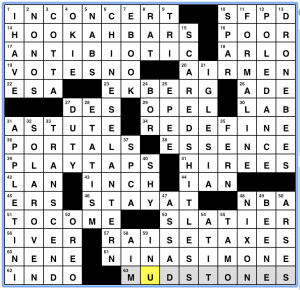 It’s themeless week at the AVCX, with a puzzle from KAC.  Let’s dig in:

I leave you with some Bon Iver – good winter, all!