No WSJ puzzle today due to the Presidential holiday. Celebrate by telling us your favorite fictional president (either a fictional character or an actor portraying an actual president) and why.

Leslie Rogers makes her NYT debut in collaboration with Andrea Carla Michaels, who is a superb constructor and mentor. Check out their comments on Wordplay for details on their work together. Deb points out that creating a good Monday puzzle is in some ways more difficult than creating a good, say, Friday or Saturday, and she’s right. She’s also right that Andrea is one of the best practitioners of that art. I liked this puzzle a lot. It played a bit harder than a typical Monday for me, but I don’t think it’s out of the general Monday range of difficulty.

I had no idea what was going on with the theme until I got the revealer, which makes it more fun for me. Let’s look at the theme entries: 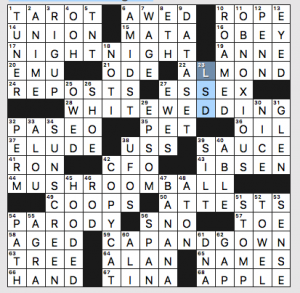 So what’s the connection? 59a asks for [Graduation garb … or what the compound answers to 17-, 28- and 44-Across represent?]. That’s CAP AND GOWN. Aha! NIGHT CAP and NIGHTGOWN (this one is brilliant), WHITECAP and WEDDING GOWN, and MUSHROOM CAP and BALL GOWN. Very nice! The constructor’s notes tell us that the theme was Leslie’s idea. I’m looking forward to more of her puzzles!

What I didn’t know before I did this puzzle: see above re: MUSHROOM BALL, which now sounds like a vegetable gala.

And, of course, I leave you with this. 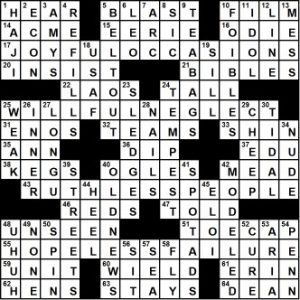 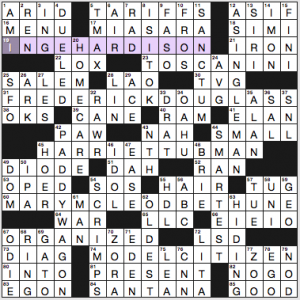 This bonus puzzle is Yolande Hardison’s debut, and the constructor has a close relationship to her theme.

Highlights in the fill include TOSCANINI, SCRIMPS, and A SINGLE MAN. 42d. [Black Maria] clues PADDY WAGON, which is a term that may or may not be a slur on Irish Americans. I didn’t know the Black Maria term, about which the Oxford dictionary folks say “said to be named after a black woman, Maria Lee, who kept a boarding house in Boston and helped police in escorting drunk and disorderly customers to jail.”

This 17×17 grid’s got a lot of 3-letter entries, which means lots of clunky little abbreviations and fragments. There’s also a dupe, with IS IT OK and OKS. Could’ve been ART/OTS or ARC/OCS, or ARE/OED/LED.

Four stars from me. I especially appreciated the articles included in a PDF sent out with the puzzle.

Boy, did I mangle this one. I found it much harder than a typical BEQ themeless- never firmly getting a foothold anywhere besides the SW. Lots of unfamiliar names and some vague cluing left me stymied. 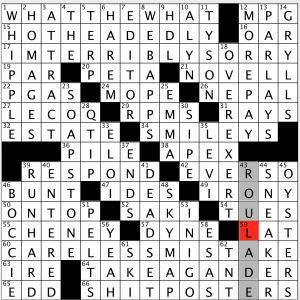 More missteps included EVEN PAY for MORE PAY, GRILLS for GRYLLS, RESOUND for RESPOND, ORATOR for EDITOR, AOL APPS (?) for WEB APPS, LDL for HDL, LIMESTONE for SOAPSTONE, POM for THE, and probably a host more. I lost track.

Names ALYN, WHIPPLE (though inferable), LE COQ, SIPE, EMMA (as clued), GRYLLS (spelling), EDD, and LEVI were all areas of stumbling for me.

2.5 stars from me. Found this one difficult to enjoy in comparison with most of BEQ’s themeless puzzles.

Let’s see what trouble we’ll be in (or, rather, B_N) with Monday’s LAT puzzle: 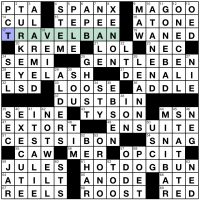 It’s unconscionable to me that TRAVEL BAN is included as a theme entry, given how xenophobic, racist, harmful, unnecessary, and misguided the current administration’s multiple attempts at travel bans have been. Also, [Extreme-weather restriction, perhaps] makes no sense as an alternate attempt at cluing. When major storms occur, certainly travel (and especially air / road travel) is halted, but there is certainly not a ban on it. There’s no getting around that there is a singular connotation for this phrase in 2019 and its inclusion in a grid has put me off … so much so that none of the rest of the puzzle merits discussing.

This grid should have been an immediate rejection. That it wasn’t and that it got through the editorial process to be published is bananas to me. 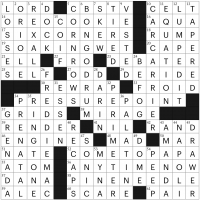