Pretty much as straightforward as the WaPo gets today!

THEME: FOUR OF A KIND. Each theme answer contains a letter that is repeated four times, and when “strung” together, those letters spell out the revealer. 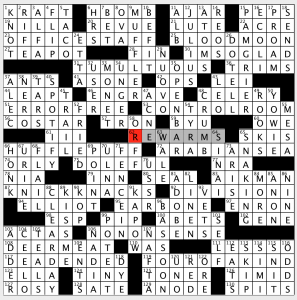 I like the way that, in Evan’s usual style, all of the theme answers work together to spell out the revealer. The puzzle is jam-packed with theme answers and is still filled cleanly, which is to be expected from WaPo puzzles. Other than that, I don’t have too much to say about the theme. Seems like there’s a nice balance in the WaPo between quirky and daring puzzles with others that play right over the plate. This one falls in the latter camp.

So instead, let’s talk 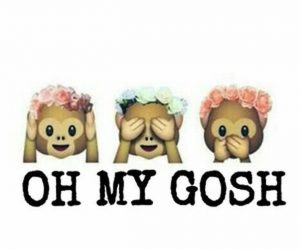 about URINE (67D [Drug test sample stuff]), shall we? Evan’s predecessor, Merl Reagle, discussed that specific word in the movie Wordplay. Citing the infamous “Breakfast Test” (you can read about that here), he refused to use it in his puzzles even though it would’ve gotten him out of a jam on numerous occasions. I find the idea of the Breakfast Test to be extremely dated, and I know I’m not alone. If the word URINE (a perfectly appropriate term) in a puzzle is going to ruin your day, then perhaps the problem isn’t with the puzzle itself. It’s not like Evan went out of his way to make waves and use it… it simply led to the cleanest fill. Congrats on your debut on the big stage, URINE!

Also, took me a moment to grok the meaning behind the title, “String Quartets.” At first I thought I was missing something- like the theme answers had something to do with music. Nope. Read as a command, if you “string” the “quartets” it spells the revealer.

Standard, fun puzzle. Hope URINE didn’t piss you off. 3.1 stars from me. 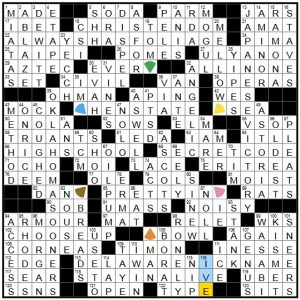 The theme answers gather up six Trivial Pursuit questions and their six answers, each of which includes a color rebus that matches the color of that topic category in Trivial Pursuit:

Neat theme! The color rebus squares are also placed carefully in the grid to be in a circle, like a Trivial Pursuit playing piece with six colored wedges in it.

Now, when you have 12 theme entries including 6 rebus squares and the rebus placement is inflexible, your grid’s gonna get a little tight. Before I encountered any of the theme, I’d already rolled my eyes at fill like ETAPE ORA ANIS AMAT AMINOR—and that was just along the top of the grid. If you’re gonna drop an ETAPE in the grid, try to hide it down in the bottom, not right where your solvers will encounter it in the first moments of solving. OH, MAN. YIPES.

Also, if you’re gonna include an answer word more than once, keep the two on opposite sides of the grid. 83d NO USE and 103d USE TO are far too close together. 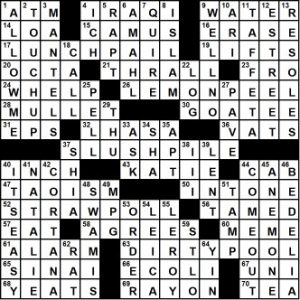 Based on sound, not letters, Kevin presents five progressive iterations of P*L, in each instance the second unit of a two-part ILSA. All with long vowel sounds: A, E, I, O, OO.

With five long horizontals making up the theme, we can skip right to the verticals for the rest of the good stuff:

Alex Eaton-Sainers is always an exciting name to see in a byline- I know nothing about him other than that he writes fantastic puzzles and is a frequent contributor to Fireball (I wouldn’t even assume his gender were it not for his own fun bio comments with each Fireball e-mail for which he is the constructor).

While this theme is nothing new, it’s solid and quite funny.

THEME: Homophones. Familiar phrases with the formula ______ AND _______ are reimagined wackily when both sides are replaced with homophones.

Last week, Judge Vic noted that 38 three-letter-words was a bit much for a Sunday puzzle. I agree, and next time I construct a 21x I’ll be conscious of that- because the first thing I noticed here besides a solid, fun theme was how often I was filling in three letter entries (40). They’re rarely fun to uncover.

As far as themers go, they all landed pretty hard for me! Only WHACKS AND WAYNE induced a bit of side eye.

3.6 stars from me. Already looking forward to the next Eaton-Sainers byline.

It took me a little while to grok the theme, although it’s not complicated. I’ll blame that on the on-call brain that was woken in the middle of the night.

The revealer is down at 94d [Michael Jackson hit … or what you can do to the start of each answer to a starred clue], and the answer is BEAT IT. The first word in each theme answer is something that fits into BEAT the ____. 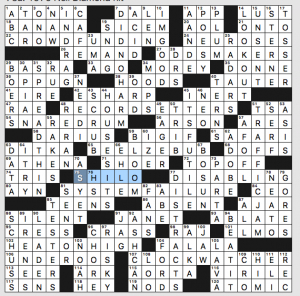 It’s a fine theme. All the theme answers and the BEAT phrases are solid. I prefer wacky wordplay, but I can’t complain about this one.

What I didn’t know before I did this puzzle: that Neil Diamond had a hit with SHILOH in 1970. I looked it up thinking I might know the song but not the title. Nope. Never heard it before. I was OK with that.

Let’s have a palate cleanser, shall we?