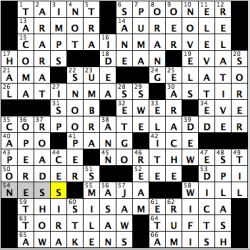 Good day, everybody! Hope you’re all doing well today! Different people have different takes on what America is about and today’s crossword literally has different “versions” of America, with the first four theme entries being multiple-word answers in which the first word can also come before the word “America.” The wonderful reveal of the theme, THIS IS AMERICA, also happens to be my favorite song/music video that I’ve come across in a good while (59A: [Childish Gambino single that won Record of the Year at the 2019 Grammys…and a hint to the puzzle theme]).

There’s some (unintentional) fun with anagrams in the grid, with both SNOOPER (22D: [Nosy person]) and SPOONER in the grid, and now I’m wondering if that occurrence is actually a funny homage to the eponym of the spoonerism, William Archibald Spooner (6A: [Reverend associated with wedding-day wordplay such as: “It is kisstomary to cuss the bride”]). I don’t know about you and/or your family members, but my father would watch the ROAD SHOW religiously and, afterward, swear that he had something in our apartment akin to some of the wares that went for hundreds and/or thousands on the show (37D: [“Antiques ____” (popular PBS series)]). Sadly have to admit that during all of my time and hours watching TCM over the past decade, I have not seen CESIRA and the movie in which Sophia Loren played that role (44D: [Sophia Loren’s Oscar-winning role in “Two Women”]). To make up for not watching an Italian movie, maybe I should have an Italian treat like a GELATO, but, unfortunately, it’s too darn cold to have one right now (24A: [Italian ice cream]).

“Sports will make you smarter” moment of the day: ELEVATED (11D: [Like some city railways]) –  If you have ever been to Nashville and/or Minneapolis, and have taken in a college basketball game at either Vanderbilt University or the University of Minnesota (Twin Cities), you will have noticed a very unique feature in the building during the game: an ELEVATED basketball court. It’s a look that the NCAA has adopted, starting in 2008, for its NCAA Tournament games played inside football stadiums, specifically for its showpiece event, the Final Four. The elevation of the court, 27 inches from the ground, allows it to be situated in the middle of the spacious building as opposed to having the court be on one side of the arena, allowing the NCAA to maximize ticket sales. (It’s all about the money, right? But, of course, the players who bring in the BILLIONS in TV revenue, ticket sales, apparel sales, etc., shouldn’t get a dime of that, right?) Anyways, here is an example of the elevated court at the 2017 Final Four, where I fortunately was able to take this picture while on my way to get popcorn from the media room. Notice the steps on the right that are needed to get onto the court. 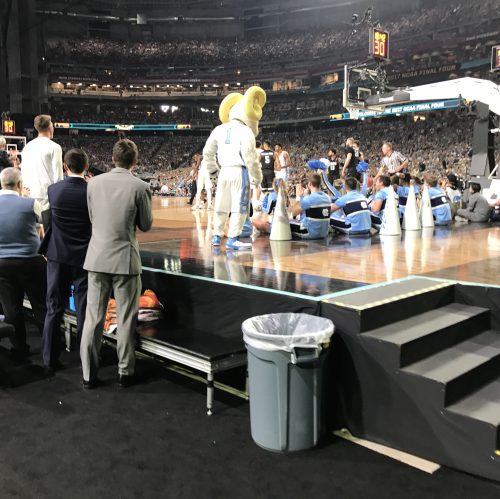 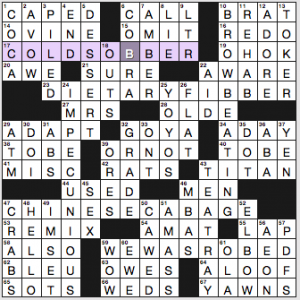 Hamlet’s “TO BE / OR NOT / TO BE” inspires this theme, wherein two phrases with a single B get that B doubled (2 B!), and two other phrases with a double B get it halved (not 2 B). The soliloquy excerpt gets the long-winded revealer clue, [With 39- and 40-Across, classic Shakespearean question phonetically suggested by 17-, 23-, 47- and 59-Across].

Cute. Not really a problem to repeat TO BE in the grid since it’s just a phrase split across entries. 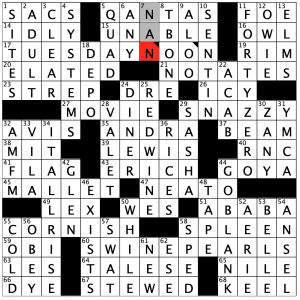 Things are all cattywampus in this grid today! But that’s OK, because it makes for a clever theme. Take four common phrases with a directional preposition in them and go to town (real phrases used in parentheses):

I told you it was quite clever! I thought I was doing something wrong at first, but when the “a-ha!” moment kicked in, it was rather satisfying. Not too much pop-culture obscurity in this one, so that is different! 4.3 stars for Matt’s puzzle this week.

Saturday will mark my last blog posts for a little bit. Heading on vacation! I cannot promise I will be reading this blog for the next week or so after Saturday’s puzzles are posted! Thanks to all the bloggers who are subbing for me while I am gone; I truly appreciate it! 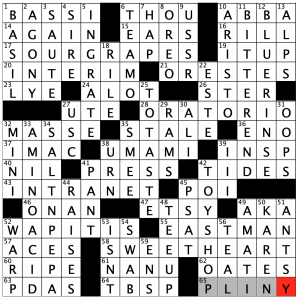 I raced through this one in under 3 minutes, perhaps because my vacation is coming soon and I am excited! As a matter of fact, this puzzle’s theme ties in quite nicely to one of the main activities I will be doing on my vacation:

Yes, the five types of taste are going to play nicely while on vacation! Hopefully there are several new foods I can try that are not available here in north central Indiana! What exactly is umami? It is supposedly what MSG tastes like, according to a rudimentary search. I do enjoy Asian flavors; I am even starting to learn more about Indian cuisine. I am getting off track, though. Paul Coulter has made a nice puzzle! 4.4 stars.

A few things I found interesting:

As mentioned above, I will still have puzzles blogged on Saturday, but after that I will be AWOL for a little bit. Have a great week!

Jim P. here filling in for Nate since the puzzle posted later than usual. 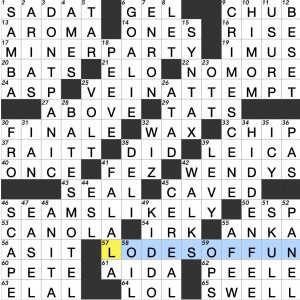 The puns here aren’t groundbreaking, but everything works as intended and it’s well-constructed. Bonus theme-related entry: 45a CAVED, which would conceivably be a “miner inconvenience.”

Lovely long fill today. HIDDEN FEE is not a nice thing, but it makes for fine fill. But the better finds are the macabre BATES MOTEL which was an on-screen CRIME SCENE. But please, DON’T PANIC. Other goodies include crunchy SYNTAX, playful KIDDO, and fed up “NO MORE!”

This is a well-made and enjoyable grid. Maybe not “LODES OF FUN,” but some fun anyway. 3.5 stars. 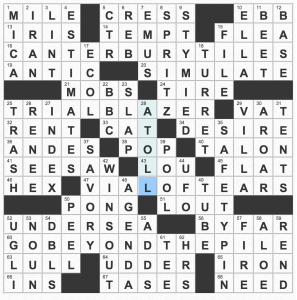 THEME: Words that have an “ale” sound to them are changed to sound like “aisle” and clued wackily

Some genuinely funny answers here- I especially like VIAL OF TEARS and GO BEYOND THE PILE as clued.

TRIAL BLAZER feels like a slight outlier since both parts of the resulting answer change meaning from the base phrase.

Smooth fill all around! I solved on the website app today, and it’s very frustrating to use in comparison with AcrossLite. It definitely added time to the solve.