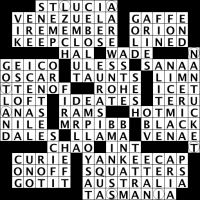 hello and welcome to episode #559 of matt gaffney’s weekly crossword contest, “Island Time”. for this week 3 puzzle, the instructions tell us we’re looking for a well-known island. what are the theme answers? it’s an unusual grid, with the theme answers located in the corners rather than evenly spaced among long acrosses. along each edge of the grid, there’s a country. in clockwise order starting from the left, they are:

here’s where the puzzle gets crazy: those corners are all incredibly difficult to solve, because there’s a hidden entry off the grid, stacked alongside the country name. they’re unclued, but they’re necessary to make the crossings work.

whew. it took me about 8 minutes to fill in the grid, and there were still some unchecked letters (like the C of CEBOLLA and the U of TERU) that i had to google after that.

after all that, though, the meta wasn’t that tough. each of those hidden entries is the name of an actual island, missing two letters. not only that, the islands are located in the correct bodies of water and in the correct geographical directions relative to the mainland countries in the clues!

the 8 extra letters you need to add, starting at the left and reading clockwise, spell out ATLANTIS, which, although fictional, is indeed a famous island. fittingly, the letters of atlantis appear to have sunk back into the ocean, leaving the names of the four real islands incomplete.

i have mixed feelings about this meta. i like the idea of it, and i love how geographically correct it is. what i didn’t love were the fill compromises necessary to make it work. it’s one thing to hide extra entries off the edges of the grid, but those extra letters are in some sense unchecked until you solve the meta, so using really unfamiliar proper names and foreign words there is almost certain to send solvers running to google, which definitely reduces the fun factor. it was pretty frustrating to have the right aha and still not be able to answer the clues. there were a few places where i felt like the extra letter could be any letter at all, or even no letter—there wasn’t any consistency in where the extra letters were and weren’t necessary.

the fact is that it’s just hard to stack arbitrarily chosen theme answers in parallel, and especially hard on the edges of the grid, where they need to be alongside stacks at least four deep. the strain this put on the crossing fill was immense. so this was perhaps too ambitious an idea. i don’t know. it was satisfying to get the answer, certainly, but a good chunk of the solving experience along the way was unfun guesswork. on technical merits, this construction was awfully creaky.

was it a meta easy enough to be a week 2 after last week’s week-3-ish actual week 2? i don’t know. the meta itself wasn’t that hard, i think, but the crossword was sooo difficult to solve.

well, that’s all i’ve got. how’d you like this one?