Peter Gordon on a Monday in the NYT means this is not blazingly hard. It’s a nice, solid Monday puzzle; an admirable construction with no tricky wordplay.

The theme answers are all linked. Wonder how many beginning solvers saw the link before the revealer? 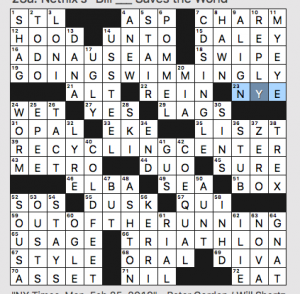 and the revealer at 66a: [Race suggested by 19-, 39- and 59-Across?] is a TRIATHLON. the SWIMMING, CYCLING, and RUNNING are in the standard triathlon order. Three 15-letter phrases that are solidly in the language with the required form of the necessary words: nicely done.

Speaking of triathlons, I was fascinated by this NYT article about a long-standing dispute over the ownership of the original Ironman.

What I didn’t know before I did this puzzle: that Bill NYE has a show on Netflix in which he apparently saves the world. 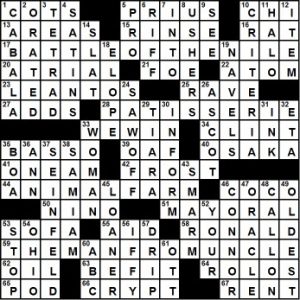 The title suggests
a theme that rests
on the notion a name will be changing
And yet four clues
all Napoleon use;
but quite simply, there’s no rearranging.
What stays the same
is the very name
in the theme clues that holds the first spot.
So I thought, then,
the title we’ll amend
and call this crossword “Name Change–Not!”

Paul surely looked for a fourth well-known person or creature with the handle Napoleon. I don’t think there is one. A Mental Floss article, “6 Things Named After Napoleon,” omits the pastry altogether! It cites Bonaparte’s son, the Animal Farm pig, the complex, a martini named for the complex, Solo the spy, and a controversial anthropologist I’ve never heard of. Good call, I guess, to stick with the pastry. Other items of note include:

Only two clues end with a question mark, which signals wordplay or trickery. Neither is humorous in the least:

IMO, 5-10 clues ought to make the solver laugh or at least smile. Looking over the answers, I see many that could be clued with this in mind. But none that were. I don’t ask for much. Just a few chuckles.

Our theme is phrases that sound like damage is being done to a part of the body. 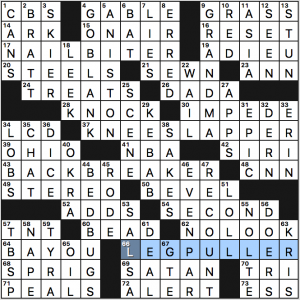 There are actually quite a lot of these kinds of phrases (brow beater, tongue twister, spine tingler, etc.). I collected them myself for a puzzle I never built. These four make a fine set for a Monday morning wake-up call, although BACK BREAKER is usually seen as the adjective “back-breaking.” Oh, but there’s the actual BACKBREAKER wrestling move which, unlike the others, does actual bodily harm…presumably.

If I can beat 4 minutes on a puzzle, then I bet some of the speed demons around here might be able to do it in under two. That’s how clean and smooth this grid is.

GO BLANK, ANISTON, GRANDMA, and BEDBUGS are your highlights. NO LOOK [Like some tricky basketball passes] was the hardest bit of fill for me. That L was my last entry in the grid, but it’s fair.

Other than that, and IMPAIR instead of IMPEDE at 30a [Hinder], there wasn’t much of anything that IMPEDEd my progress. Maybe some of the pop culture names might throw people off (BRATT, KRIS, DERN), but they’re fair as well, in my opinion.

Is my smoke detector going off? Let’s check! 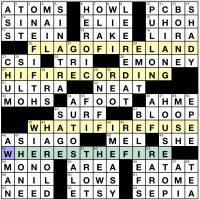 Before I even get to the theme, can we talk about some of the fill in this puzzle? Lately, I’ve been working on honing my solving skills using the Down clues only. Imagine my surprise as my solving experience with this puzzle started in the following way: 1D [Stubborn animal] is ASS, easy. 2D [Chickadee relative] … is TIT. What is this puzzle and whose breakfast test did it pass? Later on in solving, I got to 42D [Dog at a cookout] and threw my hands up at WEENIE. Who is trolling us? How did the constructor get these past the editors, all in the same puzzle?

Ok, onto the theme – each phrase hides the word FIRE, connecting nicely to the revealer of WHERE’S THE FIRE? The first and third themers felt a bit like green paint, but that didn’t detract too much from the solve. Some of the other fill was a bit meh, though: EMONEY? UH OH. ANIL? AH ME. SHADY clued as [Shielded from the sun] (which should be shaded)? AW MAN. All the same, a quick and ?! solve thanks to some otherwise smooth fill and those Down entries! 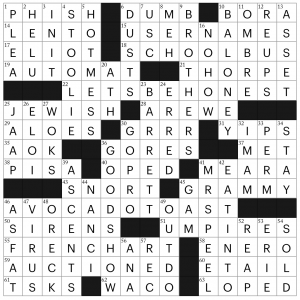 It’s Elizabeth Gorski’s turn in the New Yorker rotation, and LET’S BE HONEST: this puzzle was smooth as silk, and I LOPED through it.  Here’s some of the highlights:

This was a fairly GOOD SHOW for the New Yorker this week.  Lots of fun.

You can bet your sweet bippy (what is a bippy, anyways?) that the mere mention of Nine Inch Nails’ “Down IN IT” will cause me to look up their appearance on Dance Party USA.

A somewhat segmented grid today, creating what felt like four mini-puzzles. Just-right level of difficulty for me with plenty of entries exercising inference skills.

Fun puzzle with some zing! 3.9 stars.

P.S. Apparently, you need not be a winner to flash a V-SIGN: 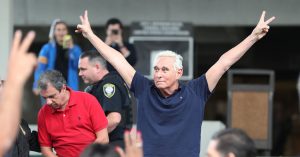