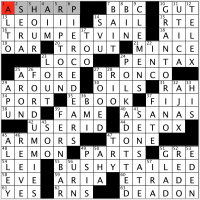 Peter asks, “What chant is hinted at by this puzzle?” Let’s start with the longer theme entries and see if they have anything in common:

The first thing to notice, given the puzzle’s title, is that the sames of six presidents are embedded in the beginnings of the long themers:

Another principle of metasolving: “when you have a list of numbers, try matching them to letters in the grid.” Following that, we get:

Put those in grid order, and you get:

Which is a patriotic chant one might hear, or participate in reciting, at a sporting event or other assembly. I find mass displays of nationalism a little frightening, so wasn’t crazy about the meta answer, but sure, this works.