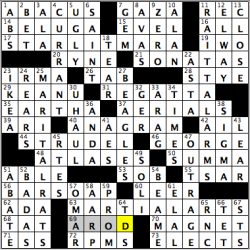 Hello there, everybody! Here’s hoping you’re all doing well as we hurtle into the month of March. Today’s grid is more ANAGRAM fun, as the four theme entries, the four longest entries in the grid, happen to be anagrams of each other (40A: [What each of this puzzle’s 11-letter answers is]). One of those theme entries, MARTIAL ARTS, is also the reveal of the theme, an homage to the hottest sport in the United States, MMA (63A: [Mixed ___ (full-contact combat sport, and the puzzle theme)]).

Please tell me there’s at least one other person out there who also thought about the “Baby BELUGA” song from Full House when filling in that entry (14A: [White whale that can turn its neck in all directions]). Oh, you have no idea what I’m talking about? Well, here you go. Consider the rest of your day ruined because of the earworm that will develop. (And, yes, I watched lots of episodes of Full House when I was younger, and I’m now trying figuring out why I did that!)

I liked the Greek/Latin intersection of SUMMA (50A: [_____ cum laude]) and SIGMA (38D: [18th Greek letter]). Probably have only heard BAR SOAP referred to as a cake about twice in my life before today (56A: [Cake floating in a bathtub]). Got to see a documentary about EVEL Knievel a few years back, and, though I knew about all of his exploits and death-defying jumps and stunts, I did not have an idea of just how popular he was in the 1970s and early 1980s, as he pretty much was the driving force of ABC’s Wide World of Sports (15A: [Daring Knievel]). Actually, I can’t think of Evel Knievel without thinking about one of my favorite TV characters of all time, the stuntman Super Dave Osborne from the Bizarre comedy series. RIP Bob Einstein, the man who played Super Dave and who recently passed away.

“Sports will make you smarter” moment of the day: RYNE (20A: [Baseball Hall-of-Famer Sandberg]) –  Due to coming across his name numerous times in crosswords, I’m sure many of you now know that Ryne Sandberg spent his entire professional career with the Chicago Cubs. But before he became a fixture on the North Side, Ryne was a member of the Philadelphia Phillies farm system and played third base. In January 1982, the Phillies and Cubs pulled off one of the more lopsided trades of the 1980s, with the Cubs acquiring Sandberg and former All-Star shortstop Larry Bowa for light-hitting shortstop Ivan DeJesus. In the Phillies’ defense, they were already set at the Major League level at third base, as Mike Schmidt was coming off winning his second consecutive NL Most Valuable Player Award in 1981. But Sandberg’s Major League career, one in which he made 10 consecutive All-Star teams, led the league in home runs in 1990 and won the 1984 NL MVP Award, made this a memorable/forgettable trade for the Cubs/Phils.

“What’s My Line?” That’s the title to guide us in today’s name-dropper of a puzzle: 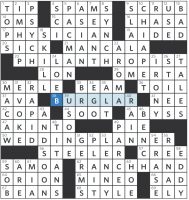 So, let’s break this down:
– A PHYSICIAN is someone who cares (carin’ = KAREN), though a lot of jobs hopefully have folks who do that!
– A PHILANTHROPIST is someone who shares (sharin’ = SHARON) though, more accurately, don’t they actually donate/give?
– A BURGLAR is someone who robs (robbin’ = ROBIN). Check!
– A WEDDING PLANNER is someone who marries (marryin’ = MARION). This one isn’t quite right, unless you have quite the all-in-one planner.
– A RANCH HAND is someone who brands (brandin’ = BRANDON). Check!

Overall, a mostly consistent theme that includes women (yay!). I’m not sure why the clues were in all caps – maybe there’s a part of the theme I’m missing. Other thoughts:

– Some of this fill is so ye olde! TOPS and IMHIP right in the NW corner made me wonder what decade this puzzle came from. I actually got stuck and filled in the western part of the grid last because I couldn’t figure out SKILL for whatever reason (my bad, honestly), but it crossed LON (?!) and MERLE (?!). That, along with not getting 1D or 2D made it hard to grok SICK or OMS (which could have been many other incantations). Basically, a potentially tricky section over there.

– There are a lot of dudes from a different era in this puzzle: In addition to LON Chaney and MERLE Oberon, we have Sal MINEO and LENNY Bruce. To be fair, there’s also AVA Gardner and MIA Farrow from a different era and the much more modern Lisa LOEB, so again, yay for including women. But dang these references are not current.

So, overall this puzzle was somewhere closer to RAD than BAD or SAD. I appreciated the attempt at the clever theme set and liked that the fill was largely clean, but a bit more modernizing of word lists would go a long way to keeping these puzzles fresh. 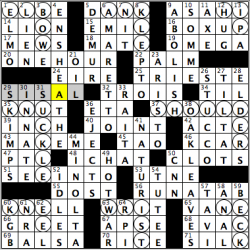 Hello once again! Pulling double duty today, so hope you don’t mind a little extra cheeriness with your review. Today’s puzzle features a series of circles that form L-shaped bends. Each JOINT happens to be filled with letters that, when combined, spell out an actual joint contained in the human body (40A: [What each set of circled letters in this puzzle represents]). Of course, after I solved the grid, I immediately looked at each of those joints represented in the puzzle to see which ones are actually giving me trouble at the moment. Right now, that’s the knee and neck.

Definitely a Euro feel to this grid given that we have a French River, SOMME (10D: [French River in fierce W.W. I fighting]), an Italian port, TRIESTE (25A: [Italian port on the Adriatic Sea]), and British terminology, MEWS, to go along with ELBE to start things off (17A: [British term for a row of houses converted from stables]). Oh, and there’s some Français thrown in for good measure with TROIS (32A: [Deux + un]), and that happens to cross AMARETTO (6D: [Liqueur whose name is Italian for “a little bitter”]). Is this all a hint to travel to Europe soon and/or apply to cover the FIFA Women’s World Cup in France this summer? Wouldn’t mind that, that’s for sure!

Liked the theme OK, but then had to resist jumping from one set of circles to the other to guess which of the other body joints would appear in the set of circles. Probably the entry that gave me most difficulty to parse was SISAL (29A: [Rope fiber]), especially when I was not trusting my instincts/vocab to believe that ENSHEATHE was correct (4D: [Cover, as a knife]). Oh, and if it wasn’t for the theme, I would have had no freaking shot at KNUT, as my Harry Potter knowledge is almost exclusively derived from crosswords, and I had yet to come across that Potter-related word until today. One day, that will change, but it won’t be today! Nor tomorrow.

“Sports will make you smarter” moment of the day: BOWE (3D: [Ring champ Riddick]) –  As some sports fans know, some of the zaniest sports-related stories come from the world of boxing, and a couple of memorable tales happen to involve Riddick Bowe, the man who defeated Evander Holyfield in Nov. 1992 to win the undisputed heavyweight championship of the world. In protest of having to soon defend his recently-won titles against Lennox Lewis (the man who defeated Bowe for the gold medal in the 1988 Seoul Olympics), Bowe famously forfeited his WBC championship belt by placing it in a trash can in London. One year later, Bowe defended his other championship belts in a rematch with Evander Holyfield, a match that Holyfield won in what would be Bowe’s only professional loss. In that match, during the seventh round, a man equipped with a parachute and an oversized, motorized fan strapped on his back descended from the sky and onto the ring in Caesar’s Palace in Las Vegas, getting entangled in the ropes of the boxing ring. I kid you not. Here’s the video of “Fan Man” and his bizarre stunt…

Don’t forget to move your clocks forward ONE HOUR in a couple of weeks (20A: [What’s gained or lost with daylight saving time]). At least it won’t look pitch black outside at 6 PM for a few months, which I like a whole lot.

Thank you so much for your time and attention, everyone, and hope you didn’t mind the review. If so, there’s always next time to improve, right? Have a good rest of your Tuesday!

I’m certainly no mathematician. I’m an English teacher. Don’t be judgin’ me typo’s. 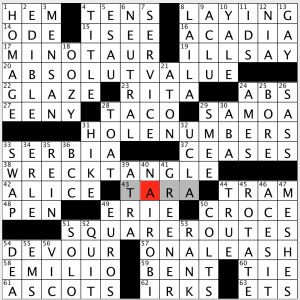 This was fun! I love wordplay puzzles like this. They don’t seem to get old to me. I do wish there were some more sparkle in the fill… ON A LEASH was fun, but other than that, it seemed relatively crosswordy… OOZY? If you say so.

Also, while both parts of 38A and 51A change meaning from their base phrase, 20A and 31A do not, as far as I can tell: VALUE = WORTH in both ABSOLUTE VALUE and the alteration ABSOLUT VALUE. NUMBERS = HAVING TO DO WITH NUMBERS in HOLE NUMBERS and WHOLE NUMBERS.

TANGLE and ROUTES both take on completely different meanings in the altered phrase.

I wonder why HOLE NUMBERS wasn’t clued as [Melodies on a golf course?] or something like that? It would’ve been more in line with the latter theme answers, in my opinion.

Laura in for Derek, who is on vacation somewhere warm. It is not at all warm here where I reside, and this is a very short post since it is so very late. 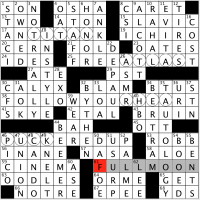 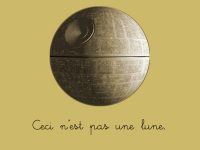 Each themer is FULL of a MOON: TITAN, ATLAS, and RHEA are moons of Saturn, while PUCK is an inner moon of Uranus <insert sophomoric joke about Uranus>. Today I learned that all of the moons of Uranus are named after Shakespearean characters, while Saturn, which has a, uhh … buttload of moons, has ones named after figures from Greek, Nordic, and Inuit mythology. Saturn also has many moonlets, which is my new favorite word, replacing my former favorite word, lunchbox. 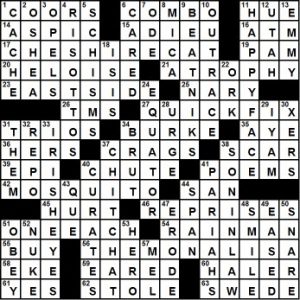 Derek is traveling. I’m honored to sub in a couple of times this week. Not long ago I wrote in a review of a puzzle at another venue, where the puzzles are always titled, that reveals more often serve a purpose in an untitled puzzle. This puzzle illustrates the point. 48a definitely serves a purpose in the puzzle.

While most people who solve crosswords probably would get the theme here without the reveal, there is nothing about how the theme answers are worded or clued that lets a solver know that each is known to have a smile:

Employing a pinwheel grid allowed Peter to have some really good other ILSA’s and their kin in both the horizontal and vertical arenas: