I didn’t recognize the byline, but Mr. Williams has had grids published in the NYT and elsewhere off and on since 2001. This is his first publication (that we cover) since 2017.

And it’s an unusual theme. I don’t think I can recall seeing anything like it. The revealer is in two parts, starting at 50a: [With 64-Across, the political spectrum, and a hint to this puzzle’s theme], LEFT, RIGHT / AND CENTER.

This is subtle, but you’ll notice that each theme entry starts with L and ends with R. And you guessed it, in the exact middle of each entry is a C. 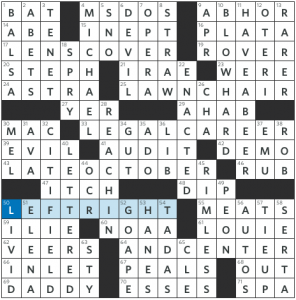 I can’t say this theme wowed me, and it didn’t help me solve the grid since I didn’t figure it out until afterward, but I did find it mildly interesting. I admire the consistency in the theme answers, and the exactness in each entry. The one stray L is unfortunate, but I had a look at other potential themers, and there aren’t a lot of choices to go with. I’m not saying that this ruins the theme, but it is slightly less elegant than if the only Ls, Cs, and Rs were the thematic ones.

I did enjoy a lot of the long fill, especially BLOWHARD, HAVE A BEER (crossing the tailgating LAWN CHAIR), CITI FIELD, and LETTERED. Along with REACH-IN [Basketball contact foul], that’s a lot of sports-related fun (and yes, I’m including HAVE A BEER in there as well). Plus there’s STEPH Curry, a New Jersey DEVIL, and sports-tickery CLE. Where’s Ade when you need a “sports will make you smarter” tidbit?

Not so keen on IRAE, plural TADAS, and OCR. Actually, I don’t mind OCR [Text-scanning abbr.] so much (it stands for Optical Character Recognition), but it is pretty technical fill that has limited appeal.

Geek alert! The only Kirk I could think of for 4d‘s clue [Kirk’s son] is of course James T. And we all know that his son is DAVID as seen in Star Trek II: The Wrath of Khan and Star Trek III: The Search for Spock. Sadly, this name didn’t fit. But wait, Kirk is a last name, so we need David’s last name which is not Kirk, but MARCUS (as he is also the son of Dr. Carol Marcus). Strike two! I needed the crossings for this entry and still I didn’t see the light. It took some post-solve cogitating to realize the clue was wanting MICHAEL Douglas.

And that’s all I have. An interesting, though not especially exciting, theme today, but a lot of strong fill, especially if you like sports. 3.6 stars. 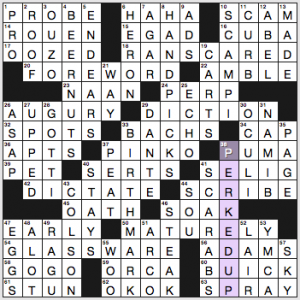 Okay! I don’t have a clue what the theme is. I need to review the theme clues and see what’s what. There were a lot of cross-references in the clues, but I didn’t actually look at the x-refs, just filled things in via crossings and judicious use of pattern recognition.

Overall, played like a standard Wednesday puzzle in terms of difficulty … and if I’d slowed down to understand the theme while solving, I might have actually finished a smidgen faster. But who cares? My competitive goals for ACPT are to acquit myself decently and come out ahead of anyone who annoys me, not to shave enough time off my solves to return to the top 10. 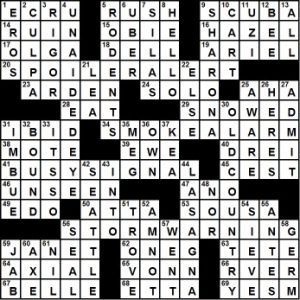 I really liked this puzzle. The theme is executed with clues that are statements by which someone advises or admonishes another. Each such statement is followed by “e.g.” The answers, then, are 2-word ILSA’s normally used in contexts other than as stated in the clues. Got it? If not, you will:

Each of these made me laugh (well, for one, it was more of an audible smile). I appreciate that in a theme! Down answers of note, positive and negative, include:

I mentioned humor in Monday’s review. I’ll mention it again today. And Friday, too, probably. IMO, 5-10 non-theme answers should be written so as to let the solver laugh. Or at least smile. The only one I see, other than 33d, is 29d [Was flaky?] SNOWED. It’s mildly funny, but …. How about [Produced chilly powder?]? Or [Came down with a white coat?]? There can, and should, be both brevity and humor in a good crossword. 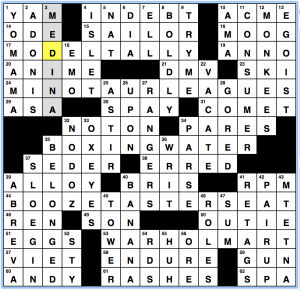 First off: look at how gorgeous the grid for this week’s AVCX is, just in terms of shape.  And it’s a themed puzzle!  The fact that it also sort of evokes a large capital Z makes me like this puzzle even more, and I liked what was going on under the hood:

This is a pretty simple theme to explain (each answer has a letter of the Greek alphabet added to turn it from a standard word/phrase into something less common), but it’s executed beautifully.  MOLLY, MINOR LEAGUES, BONG WATER, BOOSTER SEAT, and WALMART all get an upgrade into the answers above.

RIP Peter Tork of The MONKEES

Things I liked in this grid: pointing out many college grads (self included) are IN DEBT, MOOG synthesizers, SEDER, the confirmation that including a Q in this grid would mean you had ERRED, and noting that BANANA candies are uniformly gross in taste. 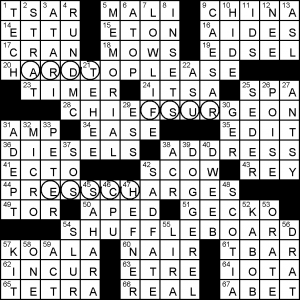 The “anagrammed words across two words in the theme answers” has become pretty common, although it always feels like the last resort when something more direct won’t work. The revealer, SHUFFLEBOARD, is on the nose however. Rather than the letters of BOARD, different ___BOARD answers are hidden in the circled squares. This gives the theme a bit more variety: ARDT is DART; FSUR is SURF; ESSCH is CHESS.