Matt Gaffney has a 21×21 crossword in New York Magazine every two weeks, and guess what? Starting this Sunday night, these puzzles will be available online for free, no magazine subscription required. The weeks in between Matt’s puzzles will have older crosswords from the New York archives. 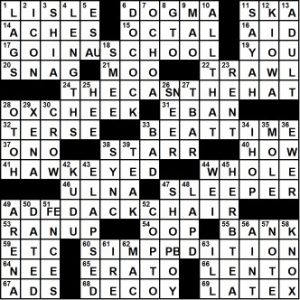 Stu Agler reports that he is a lifelong crossword fan, who retired a few years ago and has now decided to try his hand at crossword construction. This is his first published crossword.  And it is a dandy!

While metal compactor is not a term that’s found in the dictionary, we all know what one is from Breaking Bad, right? It’s one of those big crane-like devices that crushes and crunches cars and ALL THAT kind of stuff into little sandwich-pail size blocks, for some reason. Well, Stu has taken that concept and elaborated on it a tad, so that we have what I’m calling a two-fold rebus.

At 17a [Reverting to traditional practices], we need GOIN{G OLD} SCHOOL, but in the crosser 15d [Red-haired biblical twin], we need ES{AU}. Au is the elemental symbol for gold; ergo, we then are prepared to encounter TIN:
24a [Seuss’s rainy-day visitor] THE CA{T IN} THE HAT;
26d [Contemptuous smile] {SN}EER; then IRON:
49a [Patio furniture with a backward-sloping seat] AD{IRON}DACK CHAIR;
51d [August Wilson play for which James Earl Jones won a Tony] {FE}NCES; then LEAD:
60a [Two plus two, e.g.] SIMP{LE AD}DITION;
47d Charles Dickens’s Kit Nubbles, e.g. SHO{PB}OY.

Phew and whew! That was a long sentence and it was a lot harder than I thought it would be to lay out. I’m no expert typist; there was a lot of hunting and pecking going on. But now that I am able to look at it, I am reminded of a remark Bill Clinton made in Wordplay: “That’s an amazing thing! Half the time, I work these things just to see what people are thinking about.” If Stu Agler is thinking about more of this kind of thing, then I can’t wait to see what further crosswords he produces!

And the glitz does not end with the theme. There is some really top notch fill elsewhere in the puzzle. Such as: 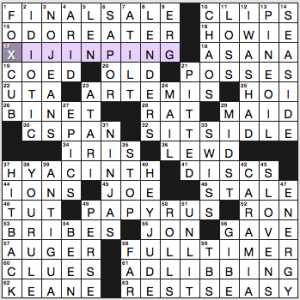 It’s been a long week and it’s nowhere near over yet, so my brain is not in that puzzle-blogging headspace. So: What I liked best in the fill is XI JINPING (interesting clue: [The world’s most powerful person, per a 2018 Forbes list]), HYACINTH (spring is coming! I’m not sure when, but eventually! we will see the HYACINTH and IRIS blooming), PAPYRUS, FULL-TIMER, AD-LIBBING, a Casual Friday NO JEANS policy, and “HEY JUDE.”

Awkwardest neighbors: “I WAS HAD” and PINE OIL. Neither of these is a phrase I ever use.

Not excited to see UTA HOI ATILT, but overall the fill is fairly smooth. 3.8 stars from me. 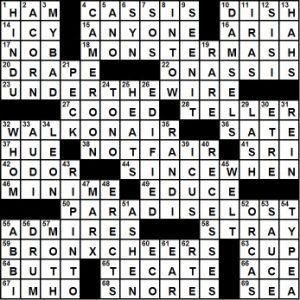 This is one of those that I will have to reason through as I write the review. Thus, on to what appear to be the theme entries:

This is a cool theme. And, with its punny clues, it evokes smiles and laughter. There is some other good stuff in this puzzle as well:

This is a competently constructed puzzle, from theme development to final clue.

The first themeless from the Inkubator crew is a good one! It fell smoothly for me with very few bumps and some really fun stuff.

I raised an eyebrow at INTRAY for 3d, [Location where work piles up]. INBOX is much more common.

The rest of the puzzle was a joy. I love the woman-centric cluing of this project. RABBI at 10a is clued [The first female one in Reform Judaism was ordained in 1972]. Thank you, Sally Priesand.  Just below Sally we have 16a [Computer first programmed by six women], ENIAC, back when computer coding was considered women’s work. 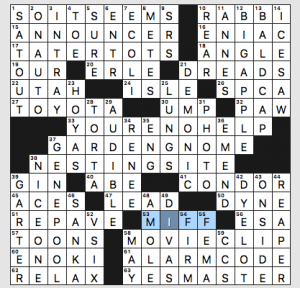 I liked the central stack of 11’s:

Other things I enjoyed: TATER TOTS, NICE ONE for “Impressive!”, semi-misleading [Grim character] for REAPER, and the clue for YES MASTER, which is nicely understated: 63a [Catchphrase in “I Dream of Jeannie” (that now seems rather … patriarchal)].

What I didn’t know before I did this puzzle: that AMOLE is a Southwestern plant used as soap. Since I couldn’t think of MIFF for [Offend], that was the last word I filled in. 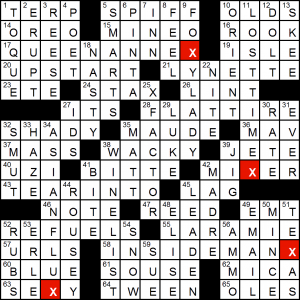 Letter addition Friday is back. Today’s letter is X, and we actually have a revealer, XFACTOR. The X is always at the end of the second word, and in the first two answers adds an “ex” sound. The next two break that pattern. So: QUEENANNE(X), LOSTTIME(X), INSIDEMAN(X), ASIANFLU(X). Queen Anne is au courant due to The Favourite.

It’s an early week grid layout, with “small” corners and flow. I didn’t have much trouble tearing through it. The clues felt simpler and less tricky than many Fridays as well.