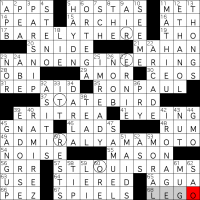 hello and welcome to episode #560 of matt gaffney’s weekly crossword contest, “Let’s Go Back to Your Place”. for this week 4 puzzle, the instructions tell us we’re looking for a two-syllable adjective. what are the theme answers?

first things first: with the “back” in the title, i pretty much immediately saw that each theme answer contained, in reverse, a hidden word or name:

not only that, each of the hidden words is from a canonically ordered list: ACPT champions, chemical elements, greek letters, months, and planets. given “place” in the title also, it makes sense to look at the ordinal place of each one within its list:

this is where i had gotten after about 5 minutes of thinking about the meta. it took an embarrassingly long time for me to have the next aha, which is that TYLER is also the name of a u.s. president—john tyler, the 10th president. (oops.) okay, so it’s 10, 10, 2, 5, 4. but that didn’t solve the problem that i didn’t know what to do with these numbers, so i put the puzzle aside for a couple of days.

when i picked it back up again, the right thing to do occurred me right away: take the corresponding letters not from the numbered squares in the grid, but from the nth letter of the same theme answer, like so:

those letters spell out RETRO, which is both a two-syllable adjective and a very apt answer for a meta mechanism involving words hidden in reverse. very good.

why was the extraction mechanism so difficult to see? matt called it a “week 2.5”, but to me it felt like a normal week 4, and judging by the leaderboard, i wasn’t alone. given a set of answers and a corresponding set of numbers, taking the nth letter of each answer is a totally routine technique in a mystery hunt-style puzzle; it’s called indexing. but i don’t think i’ve seen it before in a crossword meta (or if i have, it’s been a very long time), because typically if you can get a number out of each theme answer, it’s easier to hide the letters in the rest of the grid than it is to limit yourself to theme answers that have the double constraint of both leading to a number and also containing the right letter in the right place. the more i think about it, the more miraculous it seems to me that this meta works at all, though of course matt made it easier on himself by broadening the scope of hidden words to “anything from any canonical ordered list” instead of, say, all items from the same list. still, there can’t be all *that* many theme answers to choose from that produce the right letters, and having them fit symmetrically into a grid in the correct order to produce a thematically relevant answer is pretty terrific.

that’s all i’ve got. it’s been a strange month of MGWCC as far as difficulty gradient, but i’ve enjoyed all of the individual puzzles. how about you?