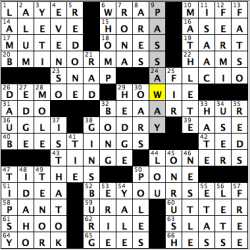 Good day, everyone! Ade here filling in for Jenni today, who currently is on a wonderful European vacation! (Jealousy level rising as I speak!!) Here is hoping that those of you who were in the path of the latest snowstorm to pound the the US this weekend are doing OK.

As for today’s puzzle, brought to us by Ellis Hay (a debut?), all I have to say to this is, “Well, I’ll be!” Not only do we have fun with homophones with the theme entries, with all of the themes starting with a “B” sound, every single clue in the grid begins with the letter “B.” Also, from a quick scan, it looks as if the only occurrences of a “B” in the grid are to the starts of the theme entries. Does March 4 denote some sort of special day? Is it “Be nice to bees in honor Bea Day?” Well, this does remind me that, during my freshman year of college, I lived in Brewster/Boland Hall, and the nickname for those dorms were “B.B.” So there’s that!

Oh, and don’t think we didn’t notice “Will Shortz” becoming “Bill Shortz” in the byline. Open challenge to all attending the American Crossword Puzzle Tournament: Walk up to Will during your time there and ask him, “May I call you Bill, just this once?” while showing him this grid.

My only real hang-up in the grid was when, before filling in “B Minor Mass,” I put in “whoop” instead of WHOMP, and I’m still a little irked at seeing that pretty dated fill (6D: [Beat badly]). But any bad feelings about any fill in the grid definitely is canceled out by the presence of The Notorious RBG herself, Ms. GINSBURG, who definitely has done my home borough proud with her illustrious career (38D: [Brooklyn-born Supreme Court justice]). There might have been a time in the late 1990s where I could name a couple of members of the Backstreet Boys by heart, but I definitely needed all of the crossings to get HOWIE today (29A: [Backstreet Boys member _____ Dorough]). Loved the dichotomy of having GO DRY (38A: [Ban alcoholic beverages]) and TIPSY in the grid, something I had to make sure I was not when I was using a bottle of red wine last night to make some red wine sauce for my once-a-month garlic chicken breasts and mashed potatoes meal (47D: [Boozed up]). If in the event you want a red wine sauce recipe, I’ll definitely share on here! Just say the word, B! (Look up “B” on Urban Dictionary if you’re thrown off by that last sentence.)

We mentioned one Brooklynite earlier in this review and now I’d like to talk about another person who was raised in Brooklyn and turned out to be an outstanding college and pro athlete…and also went down as a player with one of the most interesting names in the history of sports.

“Sports will make you smarter” moment of the day: FREE (57D: [Bingo card’s middle square]) –  One of the best guards in the National Basketball Association during the 1970s and 1980s was a player named World B. FREE. (I’m serious, that’s his name!) Born Lloyd Bernard Free, World B. played in the league from 1975-1988, most known for his time with the Philadelphia 76ers and Cleveland Cavaliers, and averaged 20.3 points per game during his career while ending his time in the NBA scoring almost 18,000 points. In 1981, Free legally changed his first name to “World,” an homage to his friends in the Brownsville section of Brooklyn who had nicknamed him “All-World” because, according to Free, “…’all-city’ and ‘all-county’ and things like that weren’t good enough.” Honestly, who couldn’t root for a player with the name World B. Free?!?!

Thank you so much for the time and attention, everyone! Have a wonderful rest of your Monday!

Call the cops! Our constructors are possessing cars in this week’s Monday LAT: 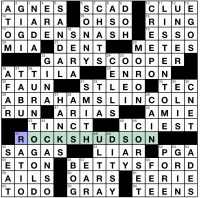 Each themer reimagines a famous person’s name as the first name (shared with another famous person) possessing a car (whose name is shared with the original famous person). I really liked how much theme density this grid featured and how consistent the themers were. The major drawback to this puzzle for me, though, was how old all the themer and puzzle references felt. Amongst the themers, I appreciate the inclusion of a woman at 56A and a queer icon at 47A, but they otherwise skewed very white, very male, and very non-current. Add in references like AGNES [Moorehead of “Bewitched”], SCAD, 1958 musical GIGI, and SONNY as [Cher’s singing partner] in the northern section of the puzzle alone, and it made the puzzle feel like it might have been written when Betty Ford was first lady. Not great for a puzzle debuting in 2019.

Other thoughts:
– I appreciated the inclusion of another gay icon in the puzzle – the more modern Ronan Farrow – to clue his mother MIA, but I wasn’t excited about MIA Farrow only being clued with respect to her role as a mother. She is quite accomplished outside her reproductive contributions to society! Ditto with Eve and CAIN at 39D.
– FAUN TINCT TEC UNSER SERA CELLS (especially to refer to phones) and [Rattlebrained] also made this puzzle feel quite dated and crosswordese-y.
– It doesn’t feel like a coincidence that CREEPO and the demanding LISTEN TO ME were side by side in this puzzle – mini theme!
– Yay for a women of color being referenced in Jada Pinkett SMITH!
– Boo for the quote at 37D emphasizing that men shouldn’t display emotions. Men should be allowed to display a wide range of emotions, just like folks of other genders are.

Common phrases of the form, “I’m ___” are interpreted literally. 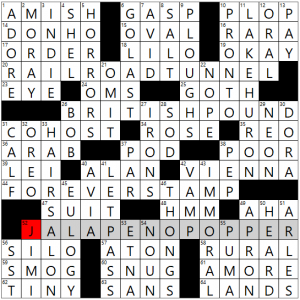 Works well enough I think. But there are quite a few more phrases that could work here: I’m easy, I’m beat, I’m good, I’m trying, etc. But with four long (12-letters or more) themers, trying to put another one in would probably compromise the fill dramatically.

As it is, there aren’t any marquee verbal phrases in the fill contrary to what I’ve become accustomed to seeing from Zhouqin. Instead we have the more serviceable LAKE HURON and HAIR SALON as well as a handful of 7s. I do like “HORRORS!” as an exclamation [“Heaven forbid!”]. 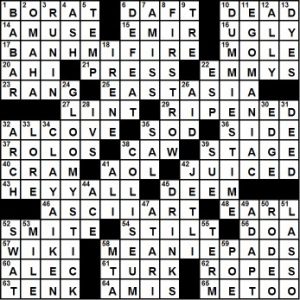 11:02 felt like forever, considering I zipped through most of this puzzle in under 7:00. My embarrassing takeaways are that I apparently cannot spell COLISEUM vertically, especially when it crosses ASCII ART and I have very little knowledge of Vietnamese sandwiches. And, since I did not ken the theme during the solve …

Oh, well. As one might expect with two guys like Andy and Natan leading a class of envelope-pushing cruciverbalist-wannbes (JASA is Jewish Association Serving the Aging), there is some really good schtuff elsewhere in this puzzle. E.g.,

Fun puzzle! I just wish that I’d been able to figure out 10d. BTW, the last crossword class I taught at Lifequest made a puzzle that was published in the Chronicle of Higher Education last year. 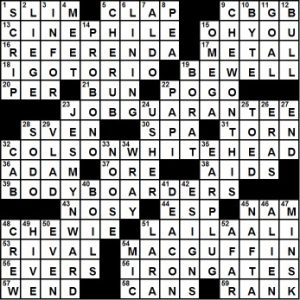 Up before dawn to blog this one, could not do the timer thing. Guesstimate: 20 minutes. The difficulty level was medium for me.

It may not be a dupe, but CHEWIE ([Co-pilot aboard the Falcon] jumped out at me as being in conflict with CHEW ON THIS. Both are clearly great entries and they’re well apart from one another in the grid. Other good stuff, with equally excellent clues are IRON GATES, LAILA ALI, JESMYN WARD, CHEW ON THIS, and PRO BONO. The weakest link was PAPI, a [Spanish paternal term of endearment].

Fun puzzle! I just wish that I’d been able to wait until noon and solve it casually over lunch. Back to bed now for a little more shut-eye before really starting the week.

HOLY FUCKING SHIT that was probably the fastest solve I’ve ever had for a BEQ themeless. I’m usually solidly north of 10 minutes. Had this one done in 6:40. The six grid-spanning entries certainly helped, and the rest of the fill was rather short (36 4-letter entries by my count!). Lots of fun, for sure- but isn’t it always when themeless answers are right in your wheelhouse?

Looking over the grid now, there are a few dingers. FAHD, CEIL, STLO, RIMA, UPUP, and ELOI lead the list for me. Easy to look past that stuff when you’re having fun zipping around the grid.