I needed not one, but two a-ha moments to grok this theme. About 3/4 of the way through the puzzle I realized all the base phrases were animals that got changed to wacky phrases with the addition of the letter B. It wasn’t until I started writing up this review that I realized that all the animals were birds. Hence, the perfectly apt title! 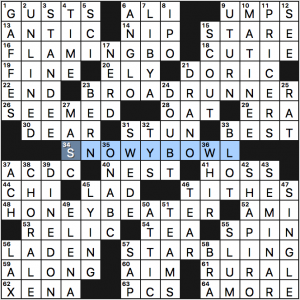 None of these is particularly lol-funny, but I appreciate the constraints that were levied by limiting the base phrases to types of birds. I found the conceit behind the theme to be sufficiently clever that the clues could get by without making me laugh. 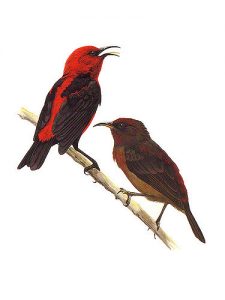 The only bird I didn’t know was the honeyeater, probably because it is most common to Australia and New Guinea. Nice to learn that there is a Micronesian Honeyeater native to my ancestral home of Guam, however the Égigi hasn’t been seen on the island since 1986. ?

Having a nine-letter central themer really messes with the grid. As a consequence, we have an upper half and a lower half joined in the middle and there aren’t any long marquee Down entries. The corners are loaded with 7s and 6s, but they’re all mostly support entries like UNLINED, DINED ON, and the like. Fill is not this grid’s strong point.

Plus there’s roll-your-own PRICERS, weird plural TYS, and extra-kludgy ON ABC clued as a partial [ESPN ___ (some sportscasts since 2006)]. Meh.

The theme is the star in this grid and it won me over with its cleverness. 3.9 stars. 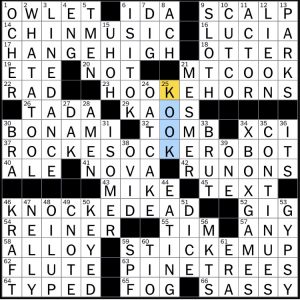 Thursday is here (at least in the eyes of the NYT Crossword App, which is what counts, right?)  We’ve got a puzzle from Brian Thomas tonight that was pretty easy to figure out the aha on:

That last one explains what’s going on – the Ms from the various `EMs in the answers have been placed one square above, filling in T-MEN, MESMER (both Ms), AMEN, and ISOMER in the down fill.  This isn’t a theme I haven’t seen before, but it’s executed well and with a minimum of frequently seen fill.

The Electric Slide, as pointed out by 3D, is a LINE DANCE

That’s it for today.  TADA! 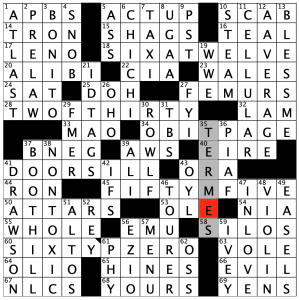 Filling in for Jenni on the Fireball while she does HER vacation duties! There is probably a cool way to display what is going on with the grid, but I am not feeling well, so I will just explain it: the theme answers all have blank clues, and the answers are literal meanings of the clue number using a little rebus action. You only see the initial rebus letters in the grid image, but here is what those answers are:

The crossers for the rebus are as follows:

It took me a few minutes to figure out what was going on. The difficulty level of these Fireballs are usually a little high on my scale, but this one was not quite as thorny as normal. My solving time was a guess, but full disclosure: I solved this at work while doing several other things at once! Alex makes great puzzles, and this one is no exception. A solid 4.6 stars from me.

That is all! See you back here on Saturday. 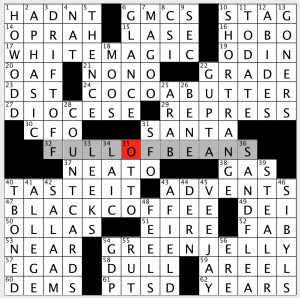 Beans! Beans! I hear they’re good for your heart…

THEME: Two-word phrases in which either word can precede “beans.”

I was delightfully surprised to see GREEN JELLY in the grid- I’d bet a lot of solvers don’t remember that band with their goofy “Three Little Pigs” stop-animation music video from the ’90s. I remember that they were sued by Kraft as well, since their original name was Green Jello. Turns out this band is still around, though it’s had a revolving door of members.

Grid felt smooth- hangups for me included SANTA (as clued), APHASIC, and SHORT RANGE. Had trouble seeing ADVENTS too, but crossing AFIELD (a word I’ve never used), it was tough to get the A. OLLA is always ugly. Plural makes it uglier.

Overall, a fun puzzle with a tight theme. 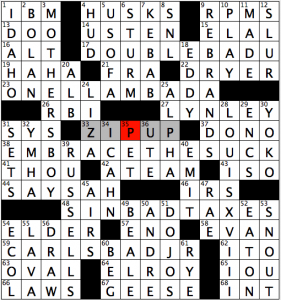 I’m back from my travels and on a new assignment! Let’s get down to BizQuigness.

Today, BEQ invites us to EMBRACE THE SUCK [Consciously accept unpleasantries, and an alternate title for this puzzle] at 38a. Four long across entries have embraced the word BAD, to punny effect:

Fun revealer, fun puns — just what you hope for from a theme like these. The puzzle is 14×15 to accommodate the 14-letter revealer, but there was still plenty of good stuff packed in here:

Great clues on 7d, KEBAB [Sticky lunch?] and 33a, ZIP UP [Deal with a fly]. And a shout-out to EVAN Birnholz at 58a [Puzzle maker Birnholz]! 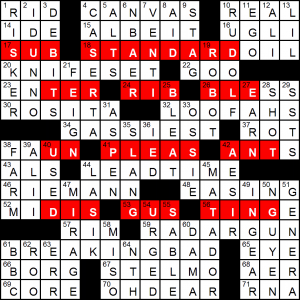 This was one of those retrospective puzzle themes, at least for me. I didn’t see anything thematic at all while solving apart from the revealer. BREAKINGBAD has been used as a theme revealer before, though I don’t recall the specifics (nor the venue). I don’t know why this puzzle brings Rolling Stone into it, since when are they arbiters of the merits of TV shows? Anyway, the theme – four rows have hidden words split across black squares: SUB/STANDARD, TER/RIB/LE, UN/PLEAS/ANT and DIS/GUS/TING. An elegant touch is that each word crosses all the black squares in that row. 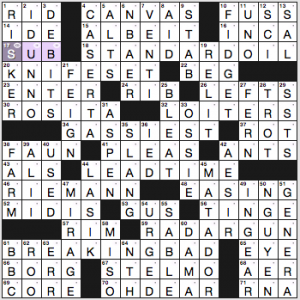 The long synonyms make for a quite ambitious arrangement, and looking back and seeing the theme helps explain some of the seemingly baffling fill choices. 1D, RISKER looked so unnecessary, for instance, but it’s actually holding up two theme entries. In the same corner, ROSITA/CASERTA are a tough pair of crossing names. Another entry that caught me by surprise was DAMA, which in most puzzles is DONA. We get the less common answer to that clue today, however.

3 Stars. Fill was a chore, but at least it was holding down a more ambitious than usual theme.
Gareth