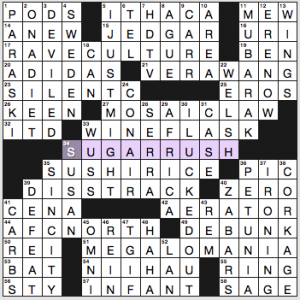 This 68-worder has lots of fresh, new stuff, but also older stuff like a WINE FLASK (is that a thing anymore?) and ERENOW and, egad, AGUE. My solving time should be shorter, but I was distracted a bit while solving.

Newest fill: RAVE CULTURE, which I didn’t know was a thing. A rap DISS TRACK; are there DISS TRACKs in country music? SUGAR RUSH. “I JUST MIGHT…”

First of all, great title. I’ve been finding that the Universal titles have been spot-on: witty, thoughtful, apt.

Secondly, I’m standing in for Judge Vic today, who has recused himself from evaluating this puzzle. I have a sneaking suspicion as to why, but I’d prefer not to speculate. This way, I can always say that I was right no matter what. 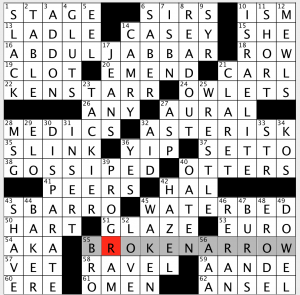 The revealer was a nice surprise as I hadn’t caught on during the solve. I figured it had something to do with double letters. After all, the longer answers JABBAR, STARR, GOSSIPED, and SBARRO seemed to have that element in common (though GOSSIPED wasn’t starred at all).

Funny that 22A was STARRed more than once, so to speak…

Theme is similar to last week’s Thursday puzzle in concept, but stands on its own merits. I especially like the clue for the revealer, the unexpected AHA, and the lack of need for circled letters. Although it seems light on theme, Uthlaut’s grid is rather constricted–in turn, fill is generally clean, but without much pizazz.

Still–enjoyed uncovering the concept. Woulda been cool to get a nod to KNOWLES in the grid for the title (or maybe JOHN?) but that’s asking too much on an already tight grid. 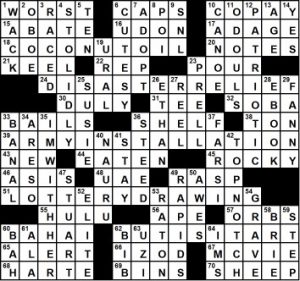 So, what we have here, in a 16 x 15  grid, with five horizontal theme answers totaling 64 letters, is a smooth-as-silk execution from stem to stern.

18a Tropical work? COCONUT OIL–Oil, but not the kind used in paintings.
24 Red Cross work? DISASTER RELIEF–Relief, but not that involved with sculpture.
39 Service work? ARMY INSTALLATION–Installation, but not of the sort associated with mixed media components.
51 Chancy work? LOTTERY DRAWING–Drawing, but not ink or pencil on paper.
62 Question famously asked by Kipling that might apply to 18, 24, 39 and 51 Across BUT IS IT ART–Not a reveal, as such, more of a bonus, a punchline, a reason to smile and affirm, “This crossword is art!”

This puzzle is simply chock-full of fun and interesting stuff. You have a little mini-theme of food: UDON, SOBA, POI, and BRIE—EATEN, then washed down with an ODOUL’S. Emotions range from CUTESY to PATRIOTIC. And TOP-NOTCH ILSA’s include AS IS, ARE SO, E-BOOK, RAT ON, and I’M WITH HER. 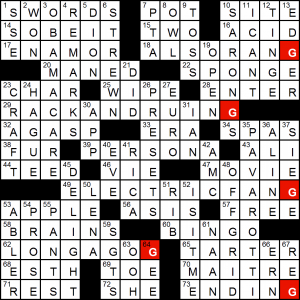 Letter addition Friday is here again. Today’s letter is ‘G’, and it’s always at the end, as revealed in the cunningly parsed END/IN/G. I quickly got used to the pattern of NG endings, since all of the first three finished with an ‘N’ that had a ‘G’ tacked on. The last entry, LONGAGO(G), threw a spanner in the works. An odd choice of lengths: 8/12/12/8 rather than the more usual theme lengths of 9-11. Partly, that was to accommodate the six letter revealer.