Posted on April 7, 2019 by Matt Gaffney
puzzle about 10 minutes; meta figured out during solve (Matt) 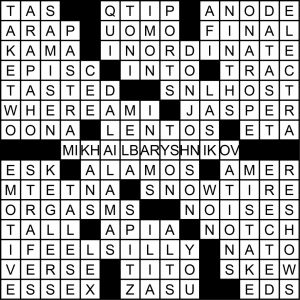 Title: “Squashed!”
Prompt: The meta for this puzzle is one of Rolling Stone’s “500 Greatest Songs of All Time.”
Answer: “Tiny Dancer” by Elton John

Month 4 of the Muller Meta, and let’s see if we can keep our streaks going. Probably, since 360 solvers have gotten it thus far, but that is a small dip from previous months.

Lovely grid, but with only one (!) meta-relevant entry, the central Across: 36a., [Famous Russian exile] = MI/KH/AI/LB/AR/YS/HN/IK/OV. Not quite correct since Baryshnikov was a defector, not an exile. But we see that the entry uses two letters per square, which means you’d have to write the letters in very small in their squares. Which suggests the early Elton John hit “Tiny Dancer,” which is #387 on that list.

So that was fun. With just one theme entry Pete had a chance to go for a killer grid, and I’d say he succeeded. DON JOHNSON, SNL HOST, TAKE TWO, WHEREAMI, I FEEL SILLY, ORGASMS (!), PASTRAMI, DALAI LAMAS, SNOW TIRE, and JASPER were all fun.

4.05 stars, and this year’s starting to feel like a horror movie where nothing scary has happened in the first 20 minutes but you know it’s coming…will May delivery the scary? We’ll find out soon…