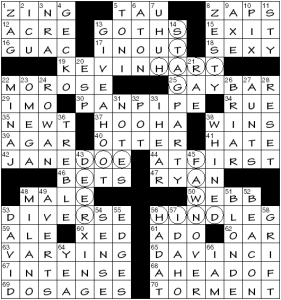 A quick one tonight because I just got home from a delightful weekend away and have to do laundry.

I didn’t suss the theme until I got to the revealer, and it was more of an “oh, yeah” than an “aha!” moment. We have four sets of intersecting circles within long answers.

This is a terrific Monday theme. It’s accessible and easily understandable, and it’s also elegant. Each type of cervine is a separate word in the larger answer. Some are the first and some the second of each two-word phrase or name. All the answers are solidly in the language. It’s a nice, solid, fun theme.

Nothing else tonight except a new closing. What I knew in this puzzle because I have a teenager: Kevin HART. Emma adores his work.

You can almost hear Melissa Etheridge singing “Come to My Window” as you solve this puzzle: 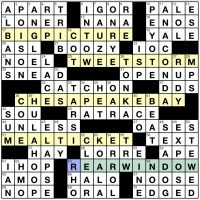 But as fun as the theme was, the puzzle suffers because of its shorter fill: a few too many acronyms (IOC ISP ASL DDS HMO) and some randomness (SOU MPS DAS HET TRW). A wise mentor once told me that no matter how strong the theme, a grid can quite often live or die as a result of the shortest fill. It gives you a lot of respect for people whose grids are consistently clean, especially when it comes to the shortest fill!

BREAK UP is the central revealer, clued [Split, and, in another way, what the starred answers do]. Each theme answer is a phrase in which one word ends in U and the next one starts with P. 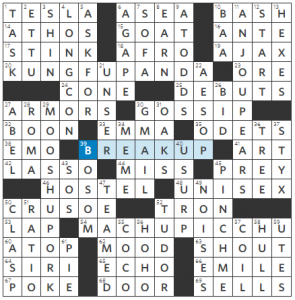 Simple theme, but it’s effective with a great set of lively themers.

The pinwheel pattern of the theme answers means there aren’t any marquee non-theme entries, but the fill is clean throughout, and there are still some goodies. I especially liked “PINCH ME!” and LONG CON as well as AT ODDS, UNISEX, HOSTEL, and CRUSOE. 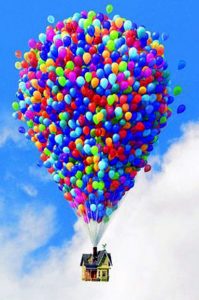 ODETS [“Waiting for Lefty” playwright Clifford] was the roughest piece of crosswordese in the grid, especially where it crossed ambiguously clued BID [Two hearts, for example]. But it was ultimately gettable.

And that’s all I have. A simple theme, but a good amount of sparkle livens it up. 3.6 stars. 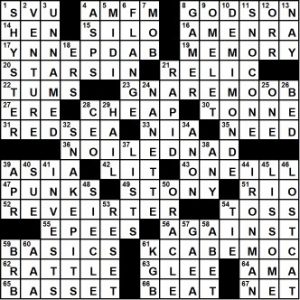 Correct me, someone, if I’m wrong, but this may be a debut for Helen, who I think is a senior staff editor on the Culture Desk of The New York Times. Anyhow, she and Will have come up with an interesting reversal theme. As I’ve done so much recently, I will again start with the reveal:

Clever! With other good fill to remark on: 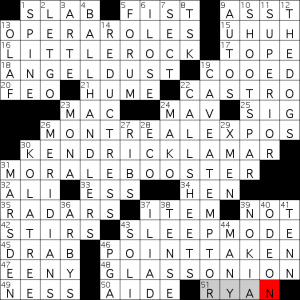 greetings. joon here with the review of natan last’s new yorker crossword. this is a gorgeous 66-word grid with stair-stacked 13s across the middle, which made it more amenable to my downs-only solving style than some other grid patterns. as a result, i finished this one fairly quickly relative to some other new yorker puzzles (including others by natan). that central stack of MONTREAL EXPOS, KENDRICK LAMAR, and MORALE BOOSTER was a lovely foundation for the puzzle; getting the former from XP_S at the end was what really sent me on my way.

some things i didn’t know among the down entries:

one troublesome entry among the acrosses: {Ugly, to Ugarte} FEO. luckily, i knew the snowman was OLAF and not OLAV, but i still had to pause at FEO because it’s not a three-letter string i recognized as being a viable fill entry.

overall, i really liked this puzzle. natan’s voice comes through very clearly in both grid and clues, and he adeptly mixes cultural content from a wide variety of sources (the beatles, kendrick lamar, acupuncture, feminist satire, and the civil rights movement, to name just a few). good stuff, as usual. 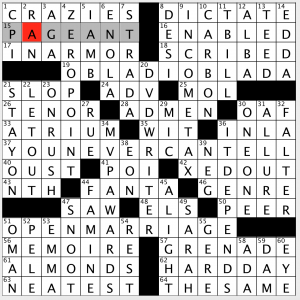 One of those puzzles where once a solid foothold is found, the rest falls into place.

I found my foothold on the west side with SLOP and TENOR, then, being able to infer POINT for the latter half of 4-Down, the rest fell into place relatively quickly. I did feel accomplished by guessing OPEN MARRIAGE (great entry) off of the first A.

Not a lot of SLOP in this puzzle at all. Could’ve done without EDDA, but Crosswordese exists for a reason. And DESI being clued as something other than Lucille’s partner threw me way off.