I suppose people probably have mixed feelings about 21X themeless puzzles- but personally, I love them. Lots of opportunities to feature entries that otherwise would never see the light of day in a crossword. 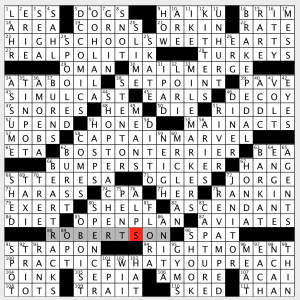 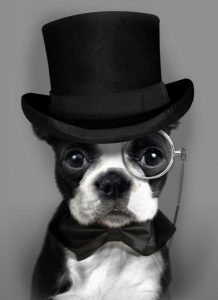 That great triple stack in the middle yielded no dreck (although I was unfamiliar with STENTOR). Nice find!

I initially panicked when I scanned the north half of the puzzle and couldn’t find any traction. Finally hit 75D [Contained, with “up”] PENT, and everything was relatively smooth from there.

Grid is practically void of Crosswordese- quite the feat for 21x fill. I would’ve preferred a few more longer entries, but it was a satisfying solve with the right amount of bite.

VIDEO GAME CLUES OF THE WEEK: 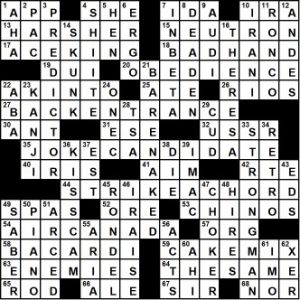 Today’s smaller Sunday Universal puzzle features Jake Halperin’s stirring up cake in a grid that includes four horizontal and two vertical non-theme answers that are of equal or greater length than the shortest theme answer–and all theme answers are horizontal! I might have advised the use of starred clues to avoid potential confusion in theme identification. Read on.

But, you know what? It’s a rainy morning, I’ve had two strong coffees and a morning glory muffin. And I’m really not bothered so much by this puzzle’s deviation from that rule as by the fact that said rule continues to haunt me. Especially when I am making puzzles for submission to mainstream editors. (For 12 years I had my own syndicated weekly puzzle and enjoyed skirting rules such as that one when I deemed it appropriate to do so.)

I kinda, sorta think Jake and David may have intended a little confusion as an adjunct to this theme. And that, therefore, they agreed to waive that rule. At least for a day. Let’s look a tad closer. First, here is the reveal:

Other good stuff includes, but is not limited to, ENEMIES, THE SAME, PREDICTOR, BARE NAKED Ladies (juxtaposed with) STRONGMAN, KISS CAM, and I RAISE.

Nice work, Jake! And kudos to David for accepting a puzzle others might have rejected on trivial, rule-related grounds. 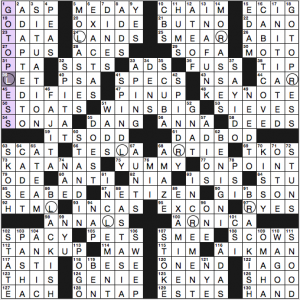 The theme answers here, all Downs, are pairs of words or phrases where one letter differs. On the left side of the grid, there’s an L that flips to an R on the right side of the grid (spotlighted by circled letters in the .puz file). We’ve got GO TOPLESS and GO TO PRESS, MOLASSES and MORASSES, SPINDLY and SPIN-DRY, BLACK•ISH and BRACKISH, and INCLEMENT and INCREMENT. It’s dry as themes go, no humor inherent in it (a letter-change theme where both the before and after are standard words or phrases, no wordplay involved), but I do like things like this, nifty pairs. (I recently posted a question on Facebook: What’s your favorite food that fits the _ _ _ ATO pattern? I’m actually torn between all three that came to mind.)

Overall, though, I didn’t love the puzzle. I really need some laughs to sustain me through a 21×21 grid, and when the theme doesn’t offer it, you’re faced with about 140 answers to just muddle through. It could’ve used some more fun clues.

Fave fill: WINS BIG, ON POINT, IN A FUNK, SKOSH. Offset by lots of duller stuff.

3.25 stars from me, unless there is some other layer I’ve missed.

Check out that nifty design! Theme is explained by the grid art itself.

THEME: Things that spin (or appear to spin). 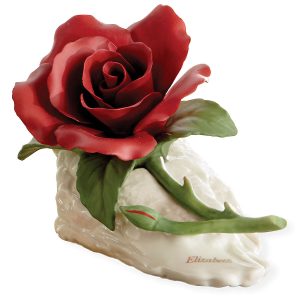 That looks about right!

Am I missing any? I feel like a may be. This isn’t the type of theme that depends on wordplay or a strict formula where everything must be exactly consistent. Rather, a set of themers that- in some sense or another- reflect the design created by the black squares. I had to check the symmetry in order to determine if some were/were not intended to be theme answers. For instance, a MUSIC BOX sort of conjures up an image of a spinning ballerina, but its symmetrical partner ARTERIES tells me that’s not meant to be considered.

Just now I added SPINNING TOP to the list, which must be in the theme- and therefore ROSE BLOSSOM should be added as well. Looking at the image of a ROSE BLOSSOM, I’m surprised it didn’t hit me sooner.

It felt like there was a lot of short fill due to the layout, but with 34 three letter entries, it’s on par with a typical 21x grid. They’re just a little more contained to certain areas of the grid.

How could you not say I LOVE IT!

Take a well-known phrase, add an I, and the resulting wackiness makes a theme. 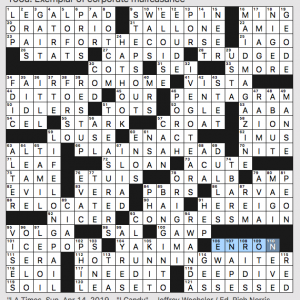 All the base phrases are solidly in the language. The altered versions are at least mildly amusing. A nice Sunday theme.

What I didn’t know before I did this puzzle: that the FDIC was founded in 1933. My AP American History teacher would be ashamed of me.

This entry was posted in Daily Puzzles and tagged Evan Birnholz, Jake Halperin, Peter Koetters, Will Nediger. Bookmark the permalink.