Well-known phrases are re-written as if speaking with a Maine(?) accent. I am not very familiar with a Maine accent. Based on this puzzle, I guess it’s similar to a Boston accent since “er” sounds become “ah” sounds. 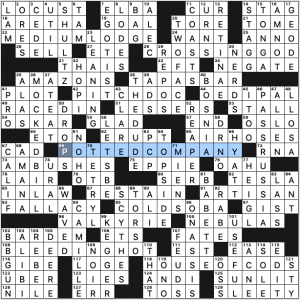 As you can see, it was hit or miss for me. And that last one really got me because I could not make sense of it in any way.  All the other entries have an O involved; the Russia one did not.

Further complicating things for me was my refusal to accept the plural of retina as RETINAE. I insisted on RETINAS at 13d which caused 44a [Like some unhealthy attachments] to look like OSDI_AL instead of the correct OEDIPAL. Sigh. Live and learn I guess.

The other thorny section for me was SCHULTZ [Secretary of State under Reagan] crossing THAIS [Massenet opera] and AMAZONS [Hippolyta’s people]. I really wanted SCHULER or something (though I couldn’t remember anyone by that name), and couldn’t get that made-up name out of my head.

High points in the grid: TAPAS BAR, VALKYRIE, NEBULAS, TWO-FACE, THE DUDE, and the CAMILLE/BABETTE duo. 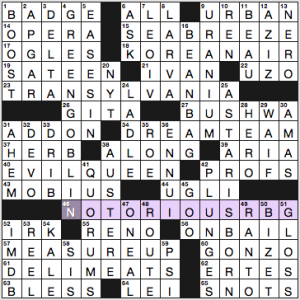 Interesting grid, with the long answers mostly hopscotching around the diagram rather than appearing in stacks. The marquee entry is the NOTORIOUS RBG, Ruth Bader Ginsburg herself. A SEA BREEZE cocktail, TRANSYLVANIA, a nonspecific DREAM TEAM and EVIL QUEEN, the GREEN GOBLIN, and A STAR IS BORN are the other sparkle points. The 6s and 7s are pretty nice, too.

There are some clunky bits in the fill, like ERTES, singular DRIB, LEO IV, and AMAS, but overall I liked the puzzle. 3.75 stars from me. 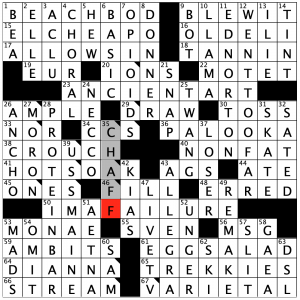 I finally did a Saturday LAT Downs Only, and it wasn’t too awfully terrible; I actually finished in under 10 minutes. Full disclosure: I did have a timer issue, so 7:15 is not accurate, but it’s not off by more than a minute or two. Yes, there are a lot of error marks in here, but that is to be expected with half the clues missing! By solving Downs Only, I missed several clues for what I thought are TERRIFIC entries: BEACH BOD, EL CHEAPO, PALOOKA, HOT SOAK, I’M A FAILURE, and TREKKIES. I did look them up later, and they are good, as we have come to expect from another stellar C.C. Burnikel puzzle. A solid 4.6 stars for this one:

Some high points – from the Downs!

I could go on, but I will stop there. Have a great weekend! 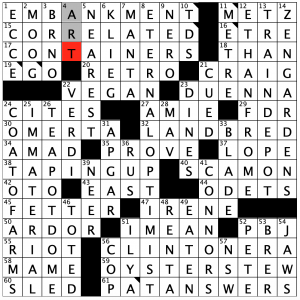 Brutal! As is usually the case, and I think it is by design, the upper left corner gave me the most fits. So yes, I spent several precious moments scanning several downs in that area while filling in absolutely nothing. I don’t remember exactly what clue I entered first, but it was somewhere in the middle, perhaps 28D (see below). A true Stumper solving experience, for sure, but I am feeling a tad better since a bad solving experience now is around 20 minutes. It used to be closer to 40 minutes of agony! Great puzzle by Brad and Matt today: 4.5 stars from me. 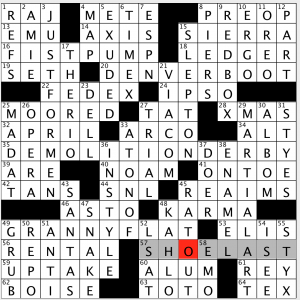 Plenty of fun stuff for me to learn from today’s Universal. I didn’t know the dreaded BOOT that keep’s one’s car stationary was credited to DENVER. It appears that it was introduced in that city in 1949. Was parking that big an issue then? I wonder if that city takes a lot of pride in that device.

GRANNY FLAT is new for me too, though my house actually has one (sans granny). I finally know what to call it.

SHOE LAST is entirely new for me, and the least inferable of the themers (I assumed the latter half might be CAST as that sounds more like a mold). Googled in quotes, it returns about 600,000 hits, but I’m not sure it’s a common enough to bring a satisfying AHA for the masses. It wasn’t for me anyway. In a puzzle full of great entries, it was the least fun to uncover.

JUST FOR MEN, RED BOX, IN STYLE, RAT OUT, MARTIAL ART, and SLEPT ON in the fill rounded out an overall entertaining puzzle.