Jim P. here in for Laura who’s out meeting with other librarians. Those librarians sure do meet a lot!

This weekend we were treated to a lovely contest puzzle by fellow Fiend Matt. We’re told we’re looking for the name of a cocktail.

We get a hint at 62d [What a cocktail served “on the rocks,” like the contest answer, contains] with the answer being ICE.

This is both a hint and a red herring as we’ll see.

First off, the solve was smooth and fun. The theme answers are all solid and interesting and cluing felt lively and fresh.

Upon completion, nothing was jumping out at me for the contest answer, so I started running through my meager bag of tricks:

Hmm. Getting nowhere. The revealer clue seems to indicate that the cocktail in question contains ICE. Maybe if I look through a list of cocktails, I can find one with ICE in the name and then try to work the meta backwards.

Here’s a great list of ranked cocktails. But alas, I didn’t see any with the letter string ICE in the name. I did note that the #1 rated cocktail around the world is the Old Fashioned. Huh. Might have to try that one of these days.

Back to the puzzle. With “on the rocks” being highlighted in what is surely a revealer clue, my spidey-sense is telling me we should be looking for instances of “rocks” in the grid and then finding the letters above those “rocks.”

But what kinds rocks are there since there’s only the one ICE in the grid? I looked below each themer for the rocks thinking the letters I needed would be in the themer. This went nowhere. 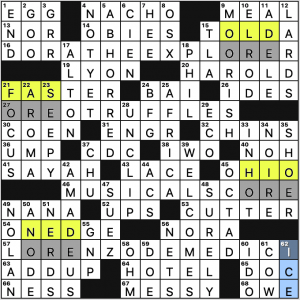 Then I looked in the theme answers themselves for the rocks. I honestly don’t remember the aha moment, maybe it was the second answer since it starts with OREO, but ORE is the “rock” I was looking for. Whew!

Above the four OREs we have, well looky here!, OLD FAS HIO NED. And that’s your contest answer for the week.

I quite enjoyed that hunt for the meta answer. It’s so serendipitous that the #1 cocktail in the world happens to be 12 letters long and each of the four trigrams can stack with the letters ORE in a workable manner. Very impressive conception and execution!

As for the grid, there are some awkward partials (TOLD A, IN HOT), but notably, those are in two of those constrained sections. I have never seen BAI [“See ya,” cutesy-texting-style], but I don’t tend to be up on the latest trends.

I did like HAROLD, AFRICA, WELCOMES, AMADEUS, NOT YET, and MOORISH.